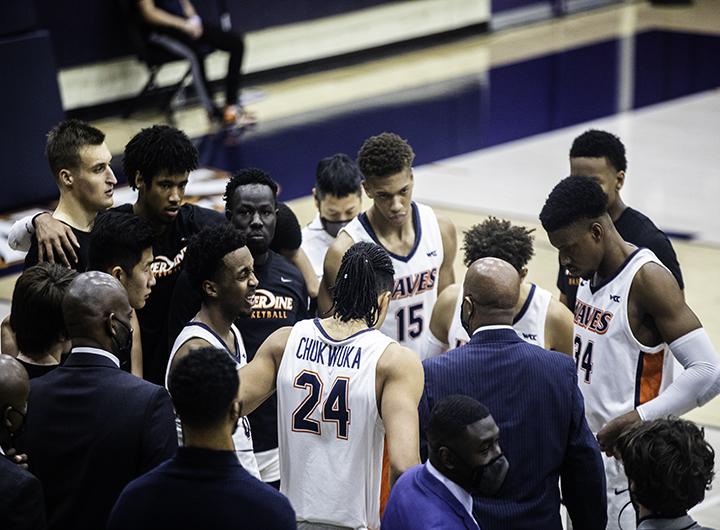 The Pepperdine Men’s Basketball team convenes during a timeout in Saturday’s loss to Gonzaga at Firestone Fieldhouse. The Zags defeated the Waves for the 41st consecutive time, 97-75. Photos by Ryan Brinkman

Despite a hot start, Pepperdine Men’s Basketball was no match for the top-ranked team in the country Saturday night.

The Gonzaga Bulldogs, the second No. 1 team ever to visit Firestone Fieldhouse, had six players score in double figures en route to a 97-75 win over the Waves.

“They exploited us and exposed every weakness that we had tonight,” Head Coach Lorenzo Romar said. “It was just that simple — we were overmatched. That’s a team that really could win a national championship, and we didn’t rise to the occasion. We can talk about improving and all that, but they were just better than us today.”

Riding the high of a big win over BYU on Jan. 27 and performing in front of national audience on ESPN, the Waves jumped out to a 16-7 lead in the first five minutes against the Zags.

“When the number one team comes to your home court, you obviously got a certain tension about yourself getting ready to play for the game,” sophomore guard Sedrick Altman said. “But ‘excited’? No. We were focused and we were determined coming into this game.”

In front of at least ten NBA scouts spread among the upper-deck seats of Firestone, Pepp point guard Colbey Ross scored six of the initial 16 points. His third bucket moved Ross beyond 2,000 points in his career, making him the first player in program history to amass 2,000 points, 700 assists and 400 rebounds in a career.

Ross became the first player in West Coast Conference history and eighth in NCAA history to reach all three milestones.

Didn’t get the result we wanted tonight but to be in a select group to have done this is truly a blessing. Thankful for the great people in my circle. There was no secret formula just hard work and extra work all the time. #Striveformore pic.twitter.com/8GrDs0f3ok

After the first media timeout with 15:41 remaining in the first half, the game turned quickly in favor of the Bulldogs.

Pepperdine’s next 12 offensive possessions resulted in 8 missed shots, 4 turnovers and 0 points. Gonzaga reeled off a 16-0 run in 6 minutes of game time.

“Once we miss shots, we tend to get down on ourselves at times,” Ross said. “We didn’t have the same focus we had in the first 10 [minutes] on defense like we had. That just comes down to staying locked in. Once things go well, we’ve got to be a team that acts like we’ve been here before.”

Halfway through the first half, Ross went to the bench with two fouls, but he returned to the game 2 minutes later with Gonzaga’s run up to 21-2.

“After that 10-minute mark, we got real stagnant and put ourselves in a tough position,” Altman said.

Altman kept the Waves afloat in the first half, putting up eight points, four rebounds and three steals.

Ross and Altman finished with 16 and 14 points, respectively, as Pepperdine played a small, guard-heavy lineup much of the game to match Gonzaga’s pace and athleticism.

“Sedrick competed. Sedrick has come a ways. He was on the [West Coast Conference] All-Freshman Team last year, but this year he’s starting to improve,” Romar said. “He’s really improved as a basketball player. That’s going to help us as we go down in this month of February.”

Gonzaga shot 62% in the first half, leading 49-34 at the break, and replicated the effort with a 57% performance from the field in the second half.

Aaron Cook, Corey Kispert and Drew Timme each scored at least 10 points for the Zags by halftime, and Joel Ayayi, Andrew Nembhard and Anton Watson joined them in double figures by the final buzzer.

Gonzaga also forced Pepperdine into 15 turnovers. The Bulldogs took a 20-point lead with 16:16 remaining and never looked back.

“They were quick; they anticipated well,” Romar said. “They took advantage whenever we were negligent. Every time we made a mistake, they would make us pay.”

The defeat was Pepperdine’s 41st consecutive loss at the hands of Gonzaga. The Waves’ last win against Gonzaga came in Malibu in 2002.

“They’re going to do what they do. They’re the number one team in the country, so we’ve got to be okay with that and just answer to whatever run they may go on,” Altman said. “Whenever we face adversity, we just got to do better with that and be more mentally tough.”

One bright spot was the Waves holding Zags freshman guard Jalen Suggs, a potential NBA lottery pick in 2021, to just four points. Suggs fouled out late in the game.

“[Suggs is] really talented when he gets a full head of steam, so just trying to get back and transition stop the ball early — that was good,” Ross said. “And then we got him into foul trouble. If you can do that, you can mess up anyone’s game.”

Ross, Altman and Romar were not despondent about the loss, preferring to give credit to the opponent and looking ahead.

The loss dropped Pepperdine to 3-3 in WCC play and 7-8 overall, but two of the conference losses came to 17-0 Gonzaga and one was against 14-4 BYU.

“We jelled really well over these past six games, learning a lot about each other and learning about about how we are capable of playing,” Altman said. “This game set a tone for us moving into the month of February, to where we can take over and do what I know we can do.”

Instead, the WCC moved Pepperdine’s game at Portland, initially scheduled for Feb. 18, to Saturday, Feb. 6. After the brief visit to the Pacific Northwest, the Waves will play on the road against San Francisco on Tuesday, Feb. 9.