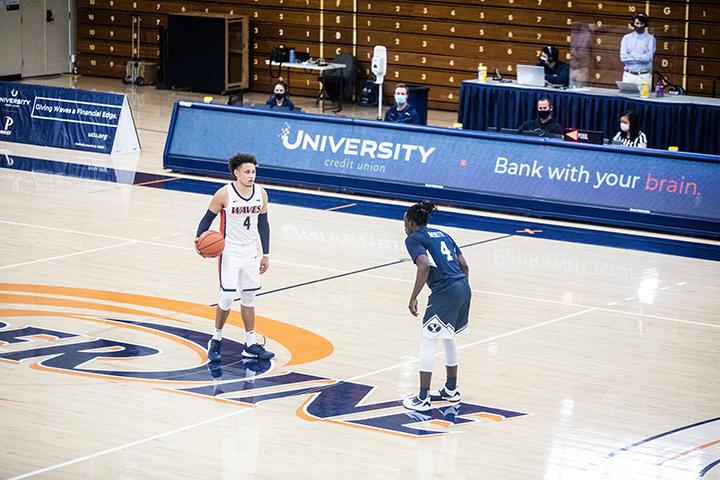 Senior guard Colbey Ross (No. 4) dribbles into the half-court set defended by BYU senior guard Brandon Averette during a Jan. 27 conference matchup in Firestone Fieldhouse. Ross had six assists and is currently ranked sixth in the NCAA with an average of 7.5 assists per game. Photos by Ryan Brinkman

In a stunning comeback, Pepperdine Men’s Basketball rallied from an 11-point deficit to defeat BYU for the first time since Feb. 9, 2017.

BYU led from the first minute until there was 12:14 left in the second half when senior guard Colbey Ross converted a 3-point play to give Pepperdine the 49-48 advantage. The lead would switch three more times with five ties before Pepperdine’s defense prevailed in BYU’s final two possessions. The win snapped a seven-game win streak the Cougars had over the Waves.

“Throughout the game Coach [Romar] kept on telling us ‘Stops. Keep getting stops,'” Junior forward Kessler Edwards said. “Last game we didn’t play them the best we could and we knew we’d hit more shots on our home court, so as long as we got stops, we were gonna be fine.” 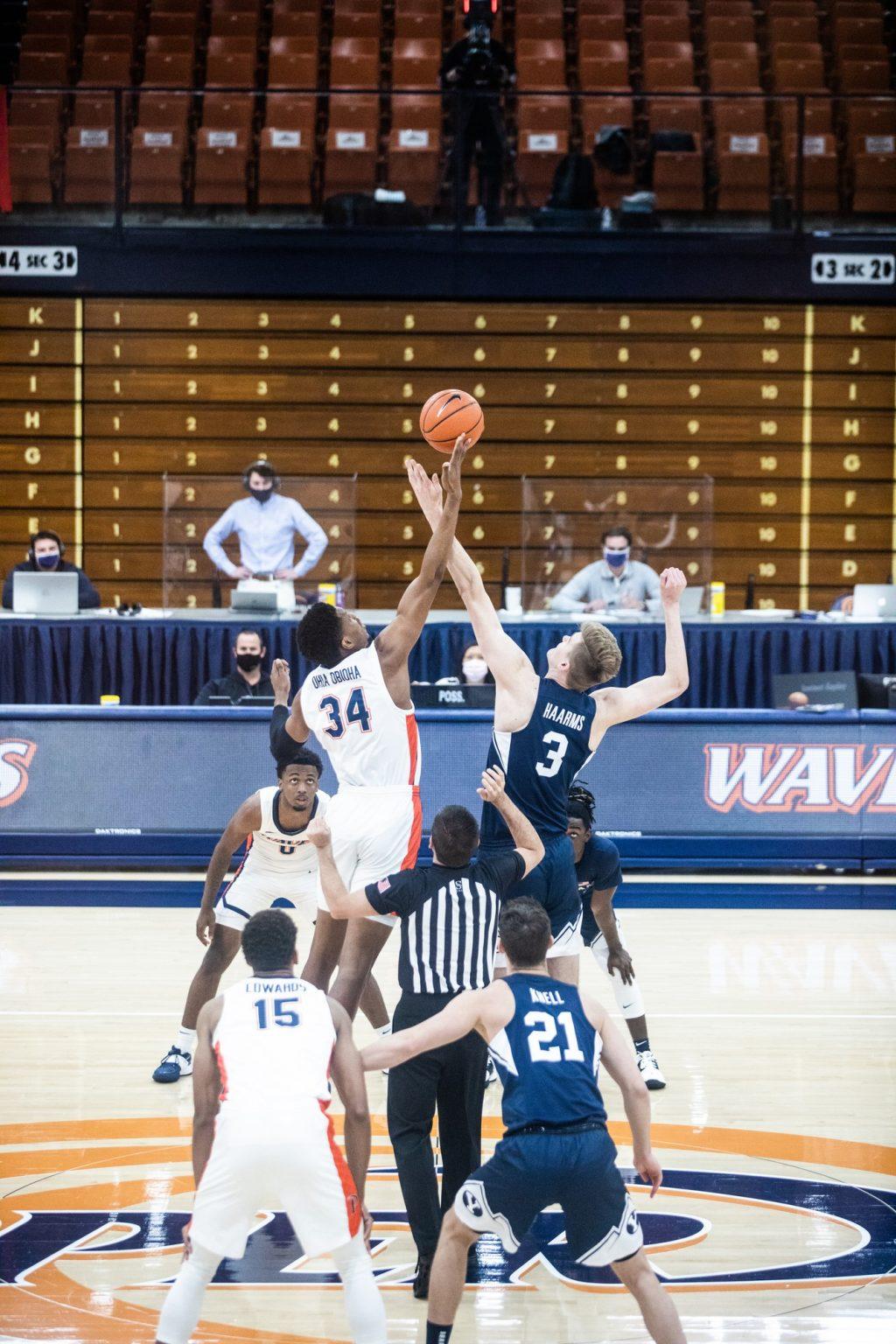 Junior center Victor Ohia Obioha wins the opening tip-off against BYU forward Matt Haarms. Ohia Obioha, who is 6’9”, was one of the many Pepperdine big men who held 7’3” Haarms to only 6 points off 3-10 shooting.

Pepperdine had a disastrous start to the game, from giving up low post positioning for an easy basket on BYU’s opening possession to an early turnover by sophomore guard Sedrick Altman with a dribble off his foot. Pepperdine trailed 11-3 with 14:00 left in the half.

The Waves slowly chipped their way into the lead, going on a 12-4 run to tie the game 15-15 with 8:38 left in the half. Two of the biggest weaknesses of Pepperdine’s offense in the first half were hitting the three and relying on one-on-one isolation instead of swinging the ball. At halftime, Pepperdine had just one assist as a team, a far cry from 16 assists on its first 17 baskets Jan. 21 against Pacific.

“Coach got on us at half to play better team basketball,” Altman said. “We knew we had to be better and get back to what we do; sharing the ball on offense all over the floor.” 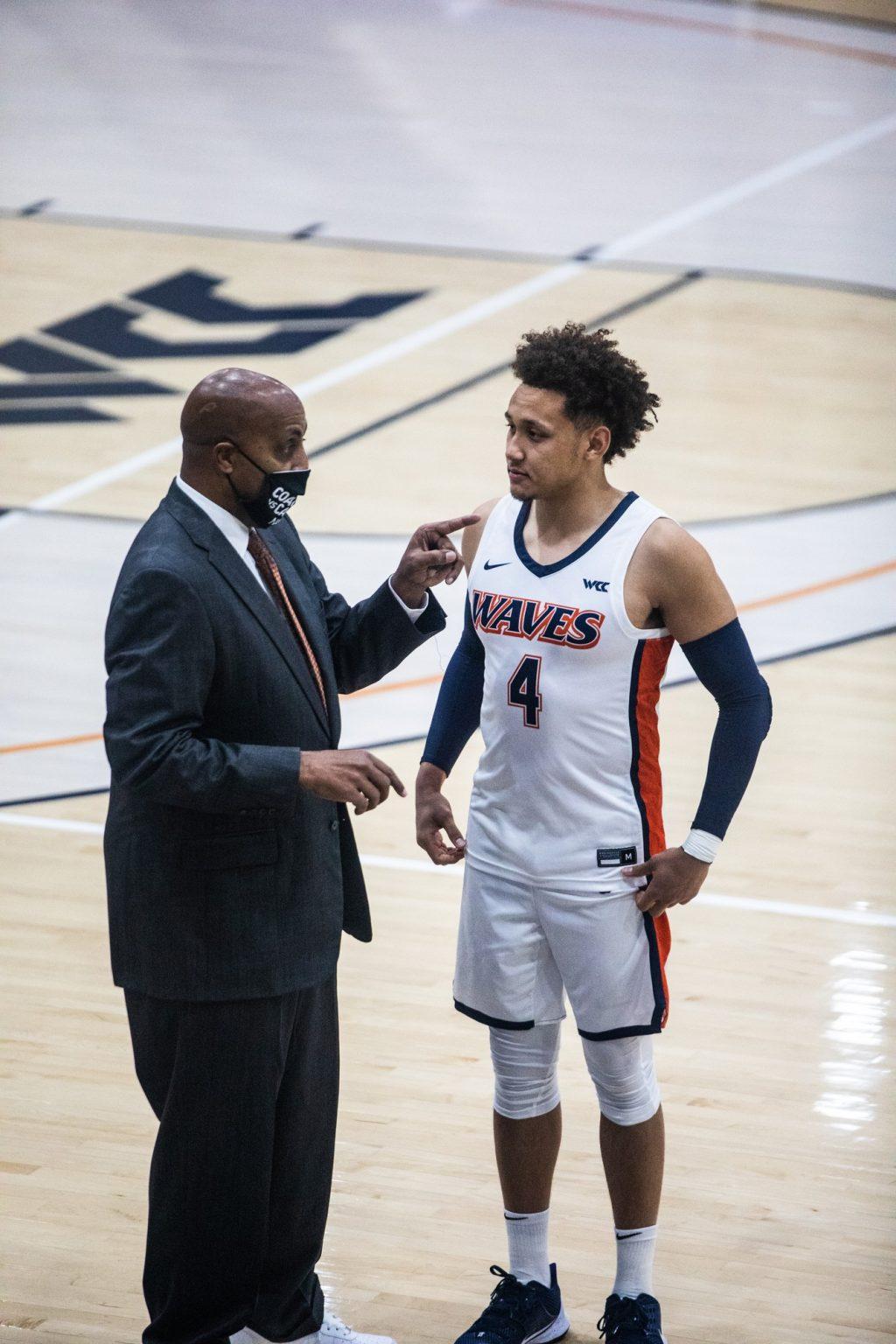 The Waves trailed 37-32 at the half. BYU had far more production from its bench as they scored 18 to Pepperdine’s 7. One of BYU’s strengths on offense is scoring in the paint; over 36% of their 65 points in their first matchup came from inside the key.

In the second installment, Pepperdine’s defense surrendered 22 points in the paint in the first half alone, but their offense was keeping up. They had 20 points from inside without having low-post scoring threats at their disposal.

Head Coach Lorenzo Romar said his offense was forcing the issue in the first half and could’ve scored more points. When they started passing more efficiently, their offense was difficult to stop. 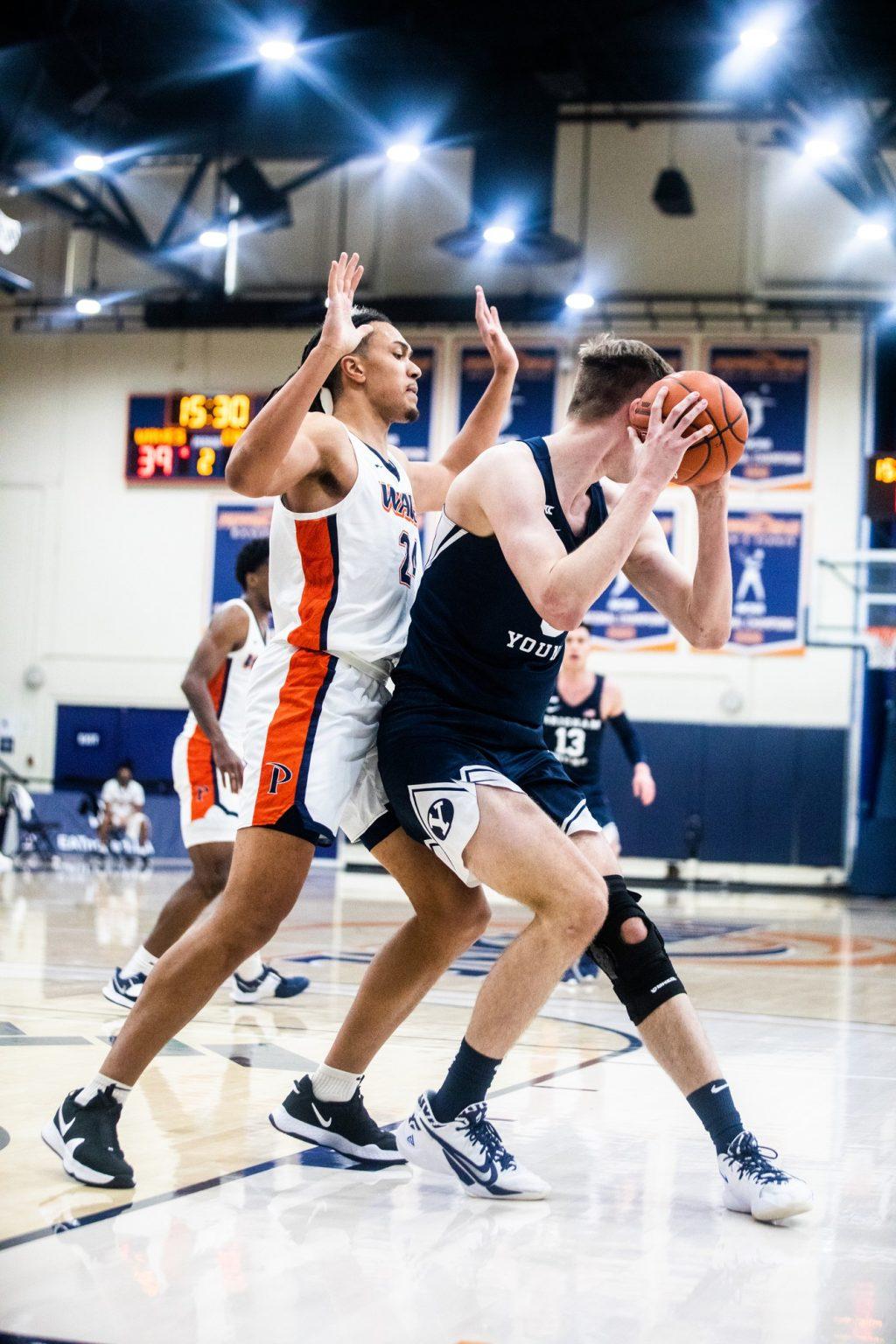 Fifth-year forward Kene Chukwuka plays defense against Haarms on the right block. Chukwuka got into foul trouble early in the game and finished with three points and two rebounds.

“We talked about BYU being so good around the rim on both sides,” Romar said. “With their rim protection and big bodies, it’s tough to just go in there and score if you’re trying to shove it down their throat. We were trying to do that earlier but when we started to move the ball and attack and get them spread out we had much more success.”

Pepperdine shot 1-for-8 (12.5%) from three in the first half and couldn’t rely on making a difference behind the arc. They chose to focus on attacking the paint with players other than Ross and Edwards. Altman and sophomore forward Jan Zidek finished with 11 and 13 points respectively, well above their season averages of 6.6 and 7.9. 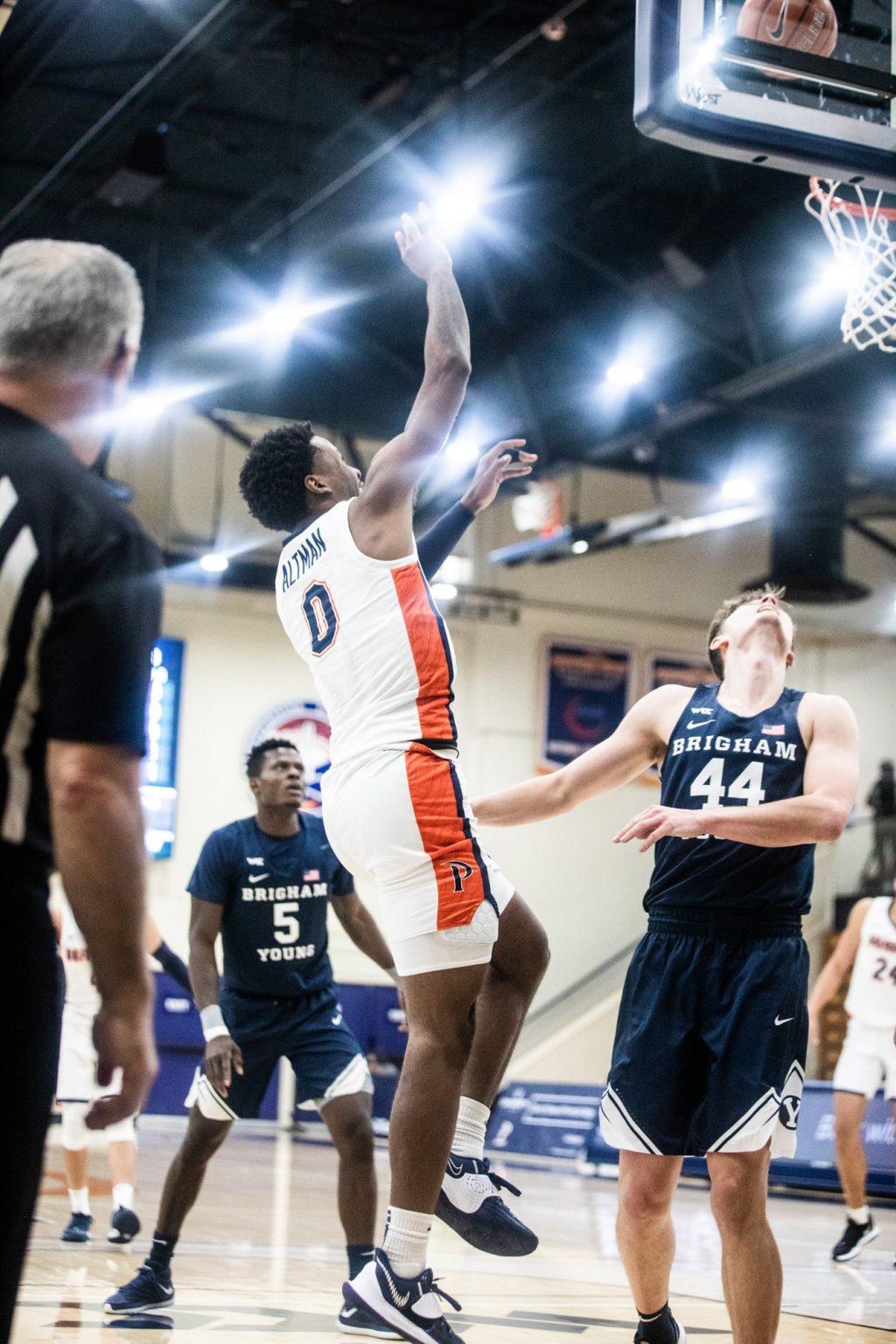 Altman, in his eleventh start this season, also contributed with nine rebounds and a pair of steals.

“The guards knew that we needed to help as much as we can down low,” Altman said. “We had to bring the tenacity and give extra effort on every possession if we wanted to win.” 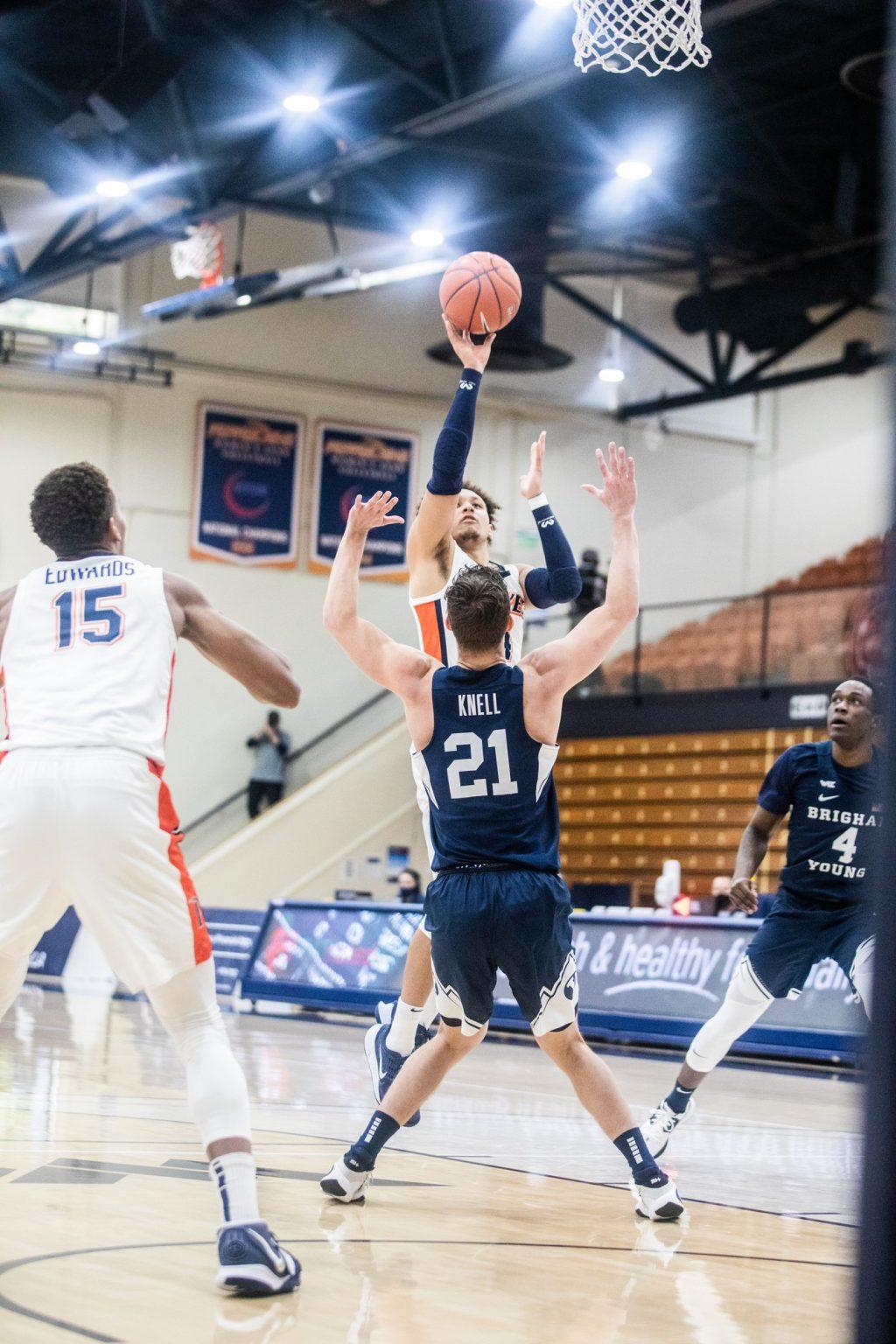 Ross shoots a right-handed floater in the paint as BYU sophomore guard Trevin Knell (No. 21) attempts to take a charge. Ross finished 4-17 from the field but shot 11-13 from the free-throw line.

After Ross gave Pepperdine its first lead of the game, they traded shots with the Cougars until a game-changing possession when the score was tied 71-71 with under two minutes left in the game.

Altman missed a pull-up jump shot and junior guard Daryl Polk Jr., tracked down the long rebound on the left side of the basket. After a couple passes, Ross missed a three from the wing and Polk bolted inside to retrieve another offensive rebound. Edwards missed a baseline jumper and Zidek hauled in the third offensive rebound of the possession and flipped in a layup for a crucial two points.

The sequence took nearly a minute off the clock, and after BYU quickly answered with a layup, Ross went 1-2 at the free-throw line after a foul to give Pepperdine a one-point lead.

BYU had a chance to take back the lead with 44 seconds left. Pepperdine’s defense locked in to force a turnover late in the shot clock before Ross hit two more free- throws to give Pepperdine a 76-73 lead. After a missed three-pointer by star senior guard Alex Barcello, the Cougars were forced to foul once more with 0.6 seconds left.

While Edwards missed both free throw attempts and BYU secured the rebound and called a timeout with 0.3 seconds left, they still had to inbound from the Pepperdine baseline and could not put up a viable game-tying shot.

Edwards finished with 18 points and Ross had a game-high 19 points, the last 5 coming from the free-throw line in the last four minutes.

After shooting 28.8% from the field in their first matchup, Edwards said his team was poised to see a lot more shots go down.

“For whatever reason in the first game, our field goal percentage was not where it needed to be,” Edwards said. “The coaching staff, as well as all my teammates had a good feeling that that would be different. This game we got so many more stops which led to more opportunities for us to be aggressive and get what we wanted.”

Pepperdine has a 3-2 conference record, jumping into a tie with Santa Clara for third in WCC standings behind Gonzaga and BYU. Pepperdine will host Gonzaga, the No. 1 team in the country Saturday, Jan. 30 at 5 p.m.

“We have to be as error-free as possible,” Romar said. “If you make a mistake on them defensively they have a player at every position who can hurt you.” 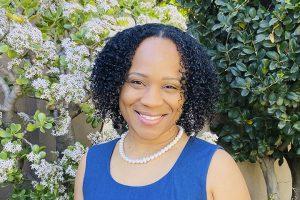