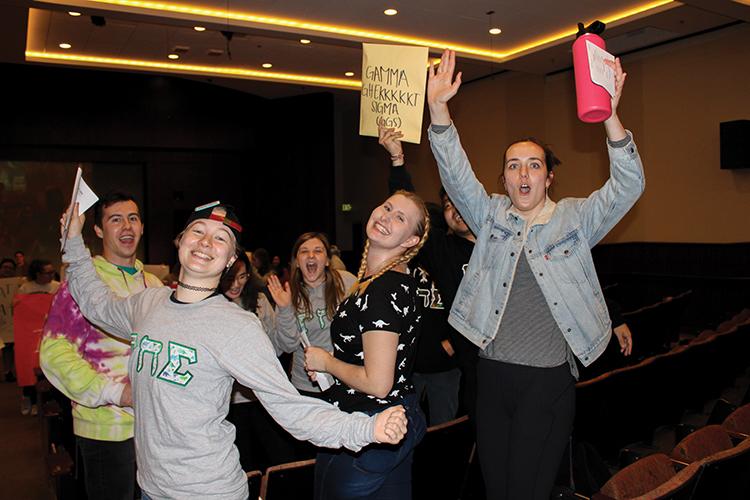 Upbeat music, bright posters and loud cheering long after the sun has set … welcome to Songfest!

Pepperdine Student Activities kicked off this year’s Songfest season Feb. 20 in Elkins Auditorium. Songfest is one of Pepperdine’s most longstanding traditions where students compete to put on original and high-spirited, medley-style performances complete with costumes, harmonies and synchronized choreography.

Junior and second-year Songfest host Becca Brackett said she is excited to once again dive into her theater background to have some fun with this year’s theme, Happily Ever After.

“I love the fairy tale theme because I think it makes it really easy to be unique from group to group, but also easy to follow a storyline which is showing up in our host songs as well,” Brackett said. “Fairy tales are so familiar, but also there’s a lot of room to still create your own kind of story.”

Five is this year’s magic number, with five student groups and five hosts performing a total of five shows. While historically Songfest has mainly featured Greek groups, this year, only the group Alpha Omega and Company is affiliated. Two groups — Pepperdine Step Team and Eudaimonia — are entirely new to the scene.

Step Team co-captain Shanelle Wilkins received an email about new cultural group opportunities and pitched Songfest to her team instead of an end-of-year show.

“[The annual step show‘s] kind of hard to book,” Wilkins said. “It’s kind of hard to get everybody to, you know, come and participate. So Songfest, we felt like was an opportunity. It’s really huge already. We have help with production, booking things like that are already taken care of. So we said, why not just make songs.”

Wilkins drew from her teammates’ big personalities when writing the script. She said she is confident that her group will have fun with the performance, even if it’s not the Step Team’s usual genre.

“We’re all primarily hip-hoppers and steppers,” Wilkins said. “Musical theater is very, very different for us, but a lot of us are really into it. We got a couple of theater people on our team, quite a few dancers on our team. So you know, they love it anyway.”

Senior Julia Held is part of the other new group, Eudaimonia, this year. While Held has performed with veteran group Gamma Ghkkkkket Sigma and Friends (GGS) in the past, she said she is excited to be a founding member of the new group based on the community built in the Great Books Colloquium.

“I’ve always wanted Great Books to be more than a class, and apparently a Great Books frat isn’t a thing, so here we are,” Held said. “This group was honestly just a dream last year. I never thought it would get this far.”

Overall, students emphasized that existing friends and the potential for a new community were the main reasons they planned to participate. When junior Natalie Castle first joined Songfest during her freshman year, the only other person she knew was her roommate. Now, as a director for the group GGS, she credits the late-night rehearsals for the close friends she has made.

“They’re killer because they’re 10 to 12 [at night], but also the craziness comes out,” Castle said. “It really bonds all of us.”

Sophomore Clara Fermanian also made new friends last spring performing with Eta Theta Tau, also known as HOT. This year, she decided to join leadership for the group as a co-choreographer.

“We are making people dance — do some crazy moves — and putting on a show,” Fermanian said.

Songfest performances will run in Smothers Theatre from Wednesday, March 18 through Saturday, March 21. Tickets cost $10 for Pepperdine students and $20 for non-Pepperdine students, with discounted prices of $7 and $15 for the Wednesday evening performance. Tickets can be purchased at the Smothers Theatre Box office between noon and 5 p.m. Monday through Friday and online at the Lisa Smith Wengler Center for the Arts website.