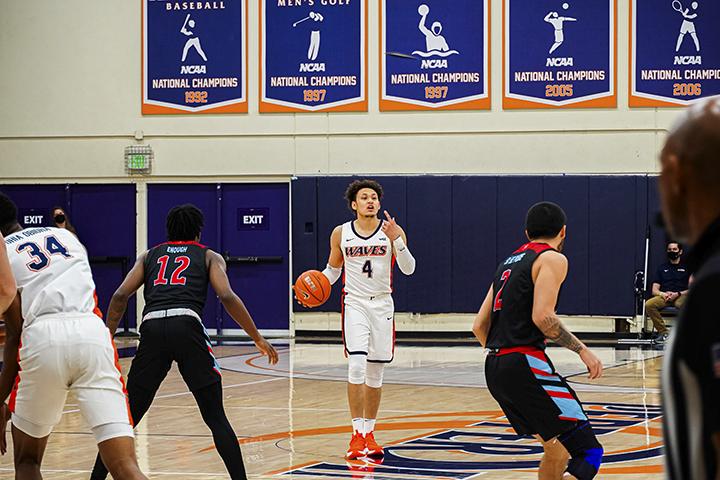 Senior guard Colbey Ross dribbles the ball across half court versus Loyola Marymount in Firestone Fieldhouse on Feb. 25. Ross had 25 points and 8 assists in his last game at the ‘Stone.

Pepperdine Men’s Basketball shot 50% from the field and scored 74 points versus Loyola Marymount on Thursday, Feb. 25, but couldn’t find a way to win.

In the contest, the Waves never led but were consistently nipping at the heels of the gritty Lions, who were undeniable down the stretch. The Waves lost 81-74 and fell to 10-11 on the season with a 6-6 conference record to solidify the fourth place spot in WCC standings. Due to COVID-19 interruptions, the WCC teamed with analytics-based basketball rankings KenPom to seed the WCC Tournament, and slotted Pepperdine at No. 3.

“They were tougher than we were,” Head Coach Lorenzo Romar said. “They played with more energy than we did. That leads to 14 offensive rebounds and LMU diving on the floor in situations that we didn’t.”

The evening was emotional for Pepperdine as the Waves honored four seniors for Senior Night before the game. The team recognized graduate assistants and former Pepperdine players Keith Smith and Michael Wexler, along with Kene Chukwuka and Colbey Ross.

“It was an emotional moment,” Ross said. “Just to see how fast it’s gone by, what my mindset was as a freshman until now, it was special. All I’ve tried to do is work my hardest and do everything for my team and my family.”

After the tipoff, things went downhill for Pepperdine. The Lions offense caught a spark from back-to-back threes by freshman point guard Jalin Anderson and senior guard/forward Eli Scott. Midway through the first half, the Lions shifted gears to feed the post, specifically their 7’3″ graduate senior center Matthias Markusson. On his first shot attempt, Markusson made the basket and got fouled before hitting one free throw.

“We were supposed to play him a certain way,” Romar said. “There were times when we didn’t execute. He got loose, and we knew if we allowed him to do that he’d score baskets. He scored 19 on us two years ago in similar fashion, so you gotta give him credit.”

Pepperdine rallied to bring the score to 40-35 at halftime. All Lions that played 10 minutes or more had at least 5 points. For Pepperdine, Ross had 11 and sophomore guard Sedrick Altman had 5.

A key matchup in the game was junior forward Kessler Edwards versus Scott, who’s coming off WCC Player of the Week honors. The players grew up less than 30 minutes away from each other, as Edwards is from Rancho Cucamonga, Calif., and Scott is from Chino Hills, Calif. Edwards and Scott squared off twice in high school during the 2016-2017 season where Scott’s Chino Hills High School beat Edwards’ Etiwanda.

The Chino Hills starting five that season consisted of LaMelo Ball, LiAngelo Ball, Lonzo Ball, Scott and Onyeka Okongwu and is considered to be one of the best high school teams of all time with three top-10 NBA Draft picks, another who has spent time in the NBA G League and Scott, who is a draft prospect this season.

Edwards, who had 14 points and 6 rebounds to Scott’s 12 and 4, reflected on the hard-fought matchup.

“Playing against him growing up, I’m familiar with his game,” Edwards said. “We knew it was gonna be a physical game coming in so I tried my best to match the toughness and match the energy.”

LMU went on a 12-4 run to start the second half and made it 52-39. Pepperdine attempted to chip away at the commanding lead, but they were without Chukwuka, the usual starting power forward, due to injury. LMU took advantage of his absence, dominating Pepperdine with 14 offensive rebounds and scoring 38 points in the paint.

“I don’t think the offense had anything to do with the loss,” Ross said. “We have good enough players to score when we want, but at the end of the day you have to get rebounds and you have to get stops. We didn’t and they were the tougher team.”

After the early LMU run, Pepperdine never brought the lead to less than eight points until the last two minutes, where a jumper from Ross changed the score to 72-66. The Lions regrouped and after an attempt from the Waves to play the foul game late, LMU left Malibu with a seven-point victory.

The loss marked the second time in Romar’s tenure that the Waves lost three straight conference games, with the other coming in February 2019. After winning their last regular season game versus San Diego, Pepperdine shifts its focus the WCC Tournament starting Thursday, March 4.

“We need to get back to playing like we know we can,” Edwards said. “We’ve dropped games we believe we should’ve won; it’s just motivation for us to get back to the level we were at before.”