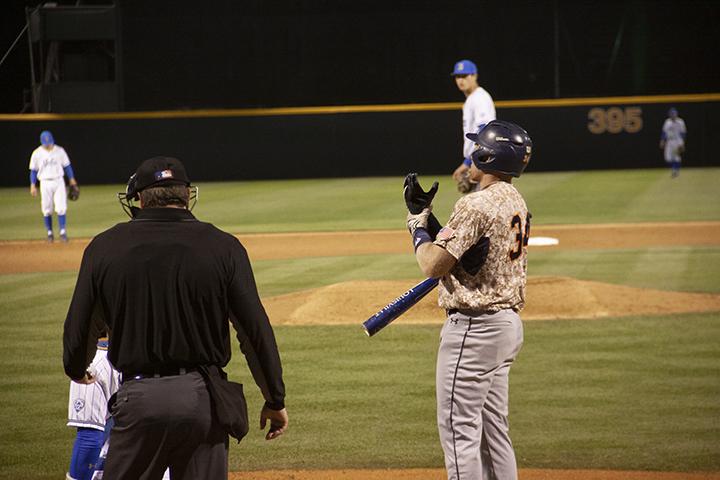 After a scorching 7-0 start, Pepperdine Waves Baseball looks to regroup after losing to UCLA for the fifth consecutive time. After a rocky first inning, Pepperdine kept things competitive for over half the game. Ultimately, the Bruins’ supreme bats and deeper pitching staff outlasted the Waves to hand them their first loss by a score of 8-2.

On a beautiful 66-degree night at Jackie Robinson Stadium in Los Angeles, the Waves had their work cut out for them facing Bruin star freshman Jared Karros. He is the son of 13-year MLB first baseman Eric Karros, who also spent his college career at UCLA. In just his second appearance, Jared Karros, one of California’s elite right-handed pitchers coming out of high school last season, consistently diffused the Pepperdine offense in the five innings he pitched.

“Nothing’s going to be easy this season,” Head Coach Rick Hirtensteiner said. “We want to get back out and compete and see how these guys respond to a little adversity.” 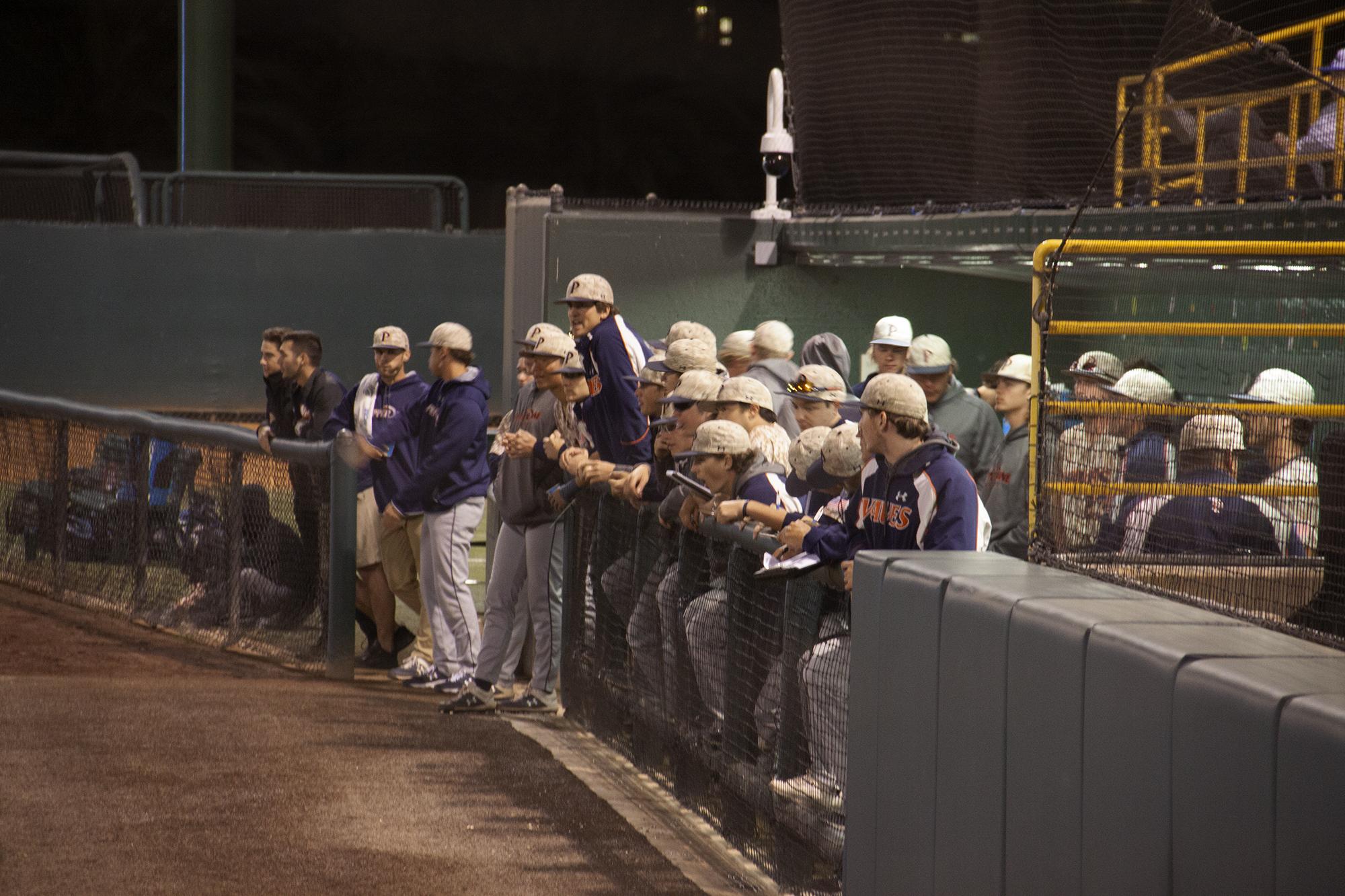 The Pepperdine baseball team watches in anticipation from the dugout during the 4th inning.

Karros retired the Waves’ first three batters in 11 pitches. Pepperdine’s starting pitcher was redshirt sophomore right-hander Gunnar Groen — in just his fifth career appearance. Despite losing a school-record 13 players to the MLB draft last season, UCLA showed they have no shortage of stellar batters, coming into the game hitting .303 as a team with six home runs.

In the Bruins’ second at-bat, left fielder Jarron Silva hit a two-run shot that just grazed the 330-foot marker inside the right field foul pole. After a swing that took the air out of Pepperdine’s dugout, Groen responded by securing four strikeouts in the next four innings. 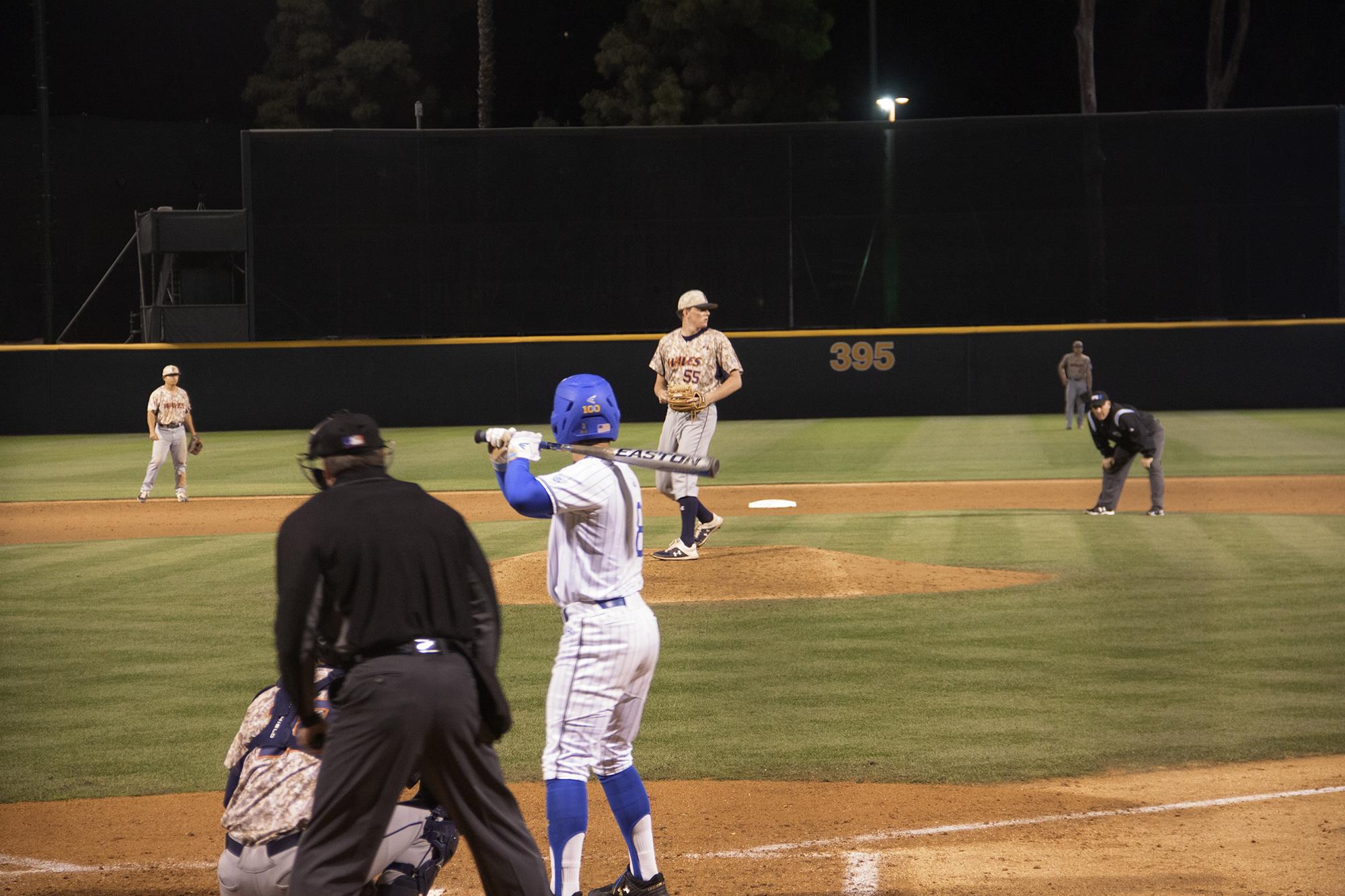 Redshirt Sophomore right-handed pitcher Gunnar Groen lookms to the dugout during an at-bat in the fifth inning.

“I learned that it’s most important to be able to make adjustments,” Groen said. “Not only from batter-to-batter but inning-to-inning. After that first inning, I realized my fastball command wasn’t where I wanted it to be. At that point, I started incorporating the sliders and change-ups, and I found my fastball later in the game.”

While Groen held down the mound after the shaky start, it was Pepperdine’s batters who struggled the entire game. Karros was hot after slinging six strikeouts in the first three innings. It wasn’t until the top of the fourth that Pepperdine had their first glimmer of hope offensively.

The top of the order was due up for Pepperdine, and sophomore shortstop Wyatt Young started things off with a beautiful single that went right past the third baseman’s ankle. Next was junior utility Billy Cook, who leads the team with a .378 batting average and three jacks. Karros baited him on a slider for the first out.

After a groundout by senior third baseman Aharon Modlin, senior first baseman Justin Lutes battled a full count for multiple pitches before singling down the left side, advancing Young to third. Next was redshirt junior left fielder Reese Alexiades grounding out to third base, leaving Young in scoring position.

After one more inning from Karros, he was replaced by sophomore right-hander Sean Mullen. After a base hit by freshman second baseman Ryan Johnson and a walk from Young, Cook blasted a single up middle that went right by the pitcher and second baseman to score Johnson.

UCLA Head Coach John Savage quickly reached into his bullpen to thwart the Pepperdine run. Mullen was soon replaced by sophomore lefty Daniel Colwell who struck out Lutes. Colwell was replaced by junior right-hander Michael Townsend who forced another Alexiades groundout to get them out of the inning.

At the bottom of the sixth, Groen trotted back onto the mound and gave up three straight hits to bring the score to 3-1. He was replaced by left-handed freshman Nate Diamond who gave up four hits across two innings before being taken out for redshirt junior right-hander Trevor Franklin. 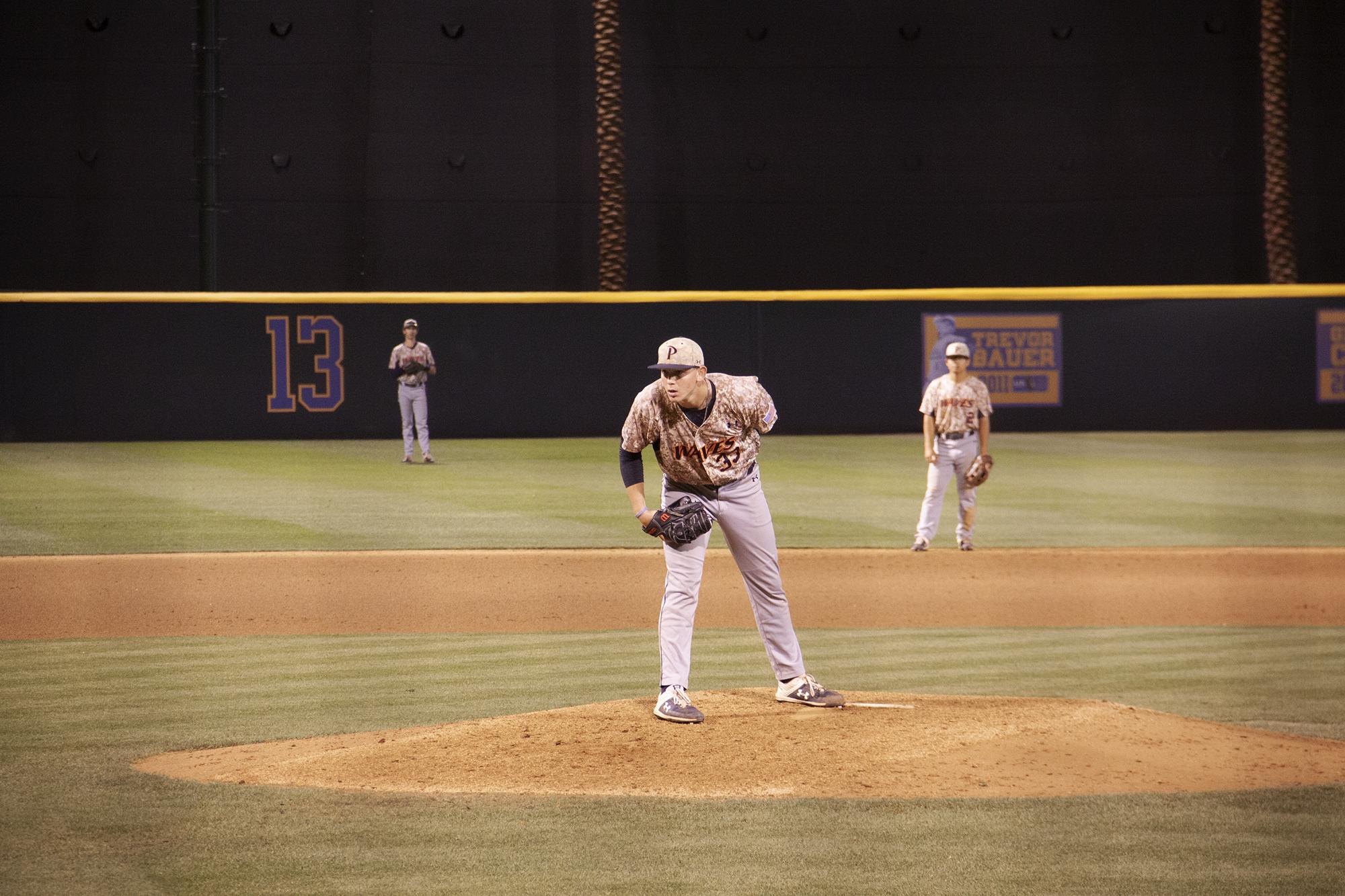 Freshman left-hander Nate Diamond waits on the pitchers mound before heaving a pitch.

Groen said that for the team, this was an early test that they’ll learn from moving forward.

“I think it’s great for us to play a team like this,” Groen said. “And not just because of how talented they are but because how we approached it with no doubts and no concerns. Our mentality is in a great place — now it’s just improving in all aspects of the game.”

The UCLA bats did not let up, and after scoring the single run in the sixth inning, they piled on with four in the seventh. Hirtensteiner looked to 6-foot-4-inch freshman right-handed pitcher Jack Chester to finish things in his second appearance. He gave up the last run of the game but also got Pepperdine’s last two outs. 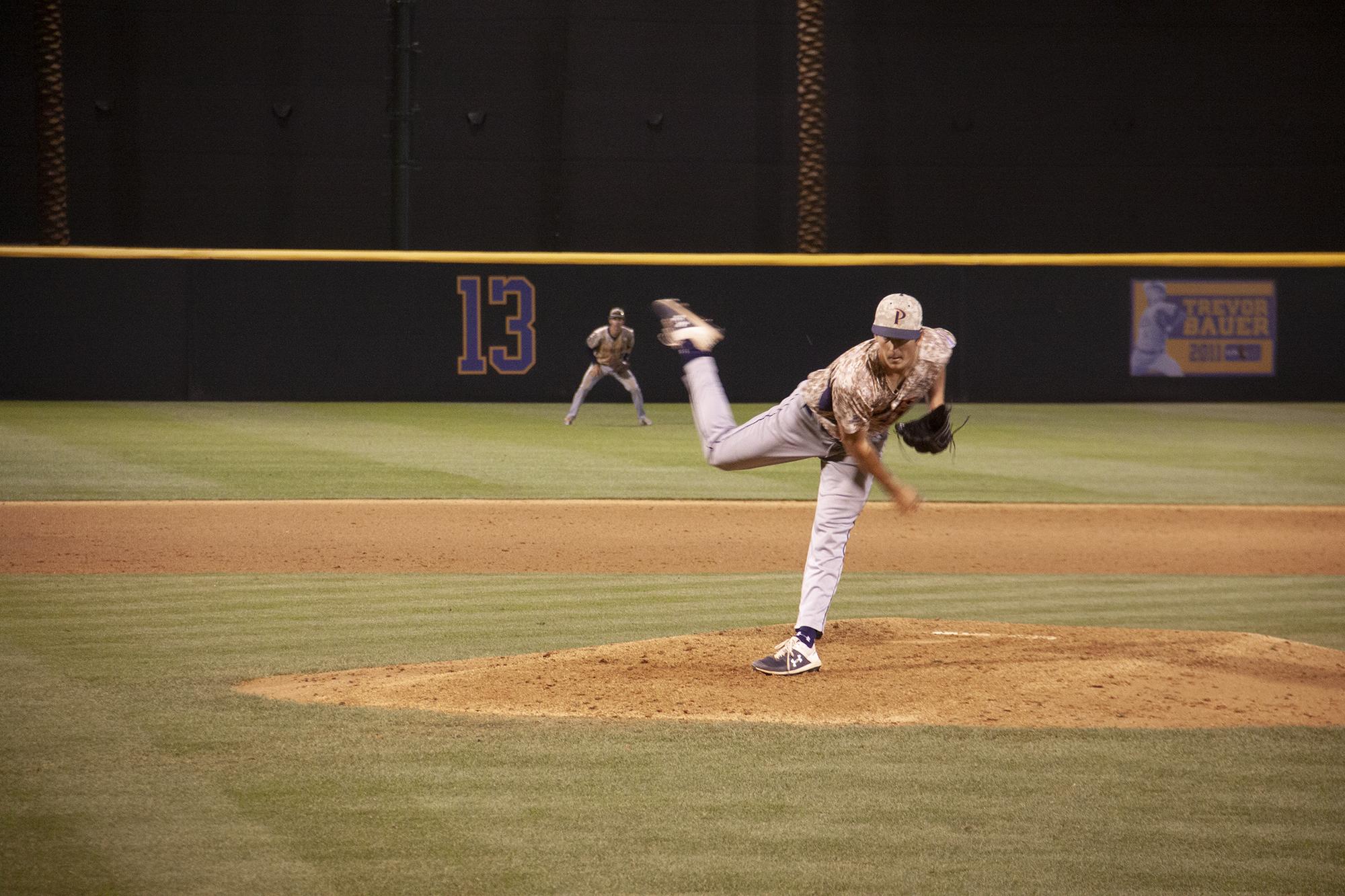 Freshman right-hander Jack Chester unloads a pitch in the bottom of the 8th inning.

Chester said that regardless of the score, it’s good to get experience against such a formidable opponent.

“I was excited to get in and show some of my stuff,” Chester said. “Also to compete against a really high-level team. The older guys have been teaching me a lot, and there’s so much to learn from them.” 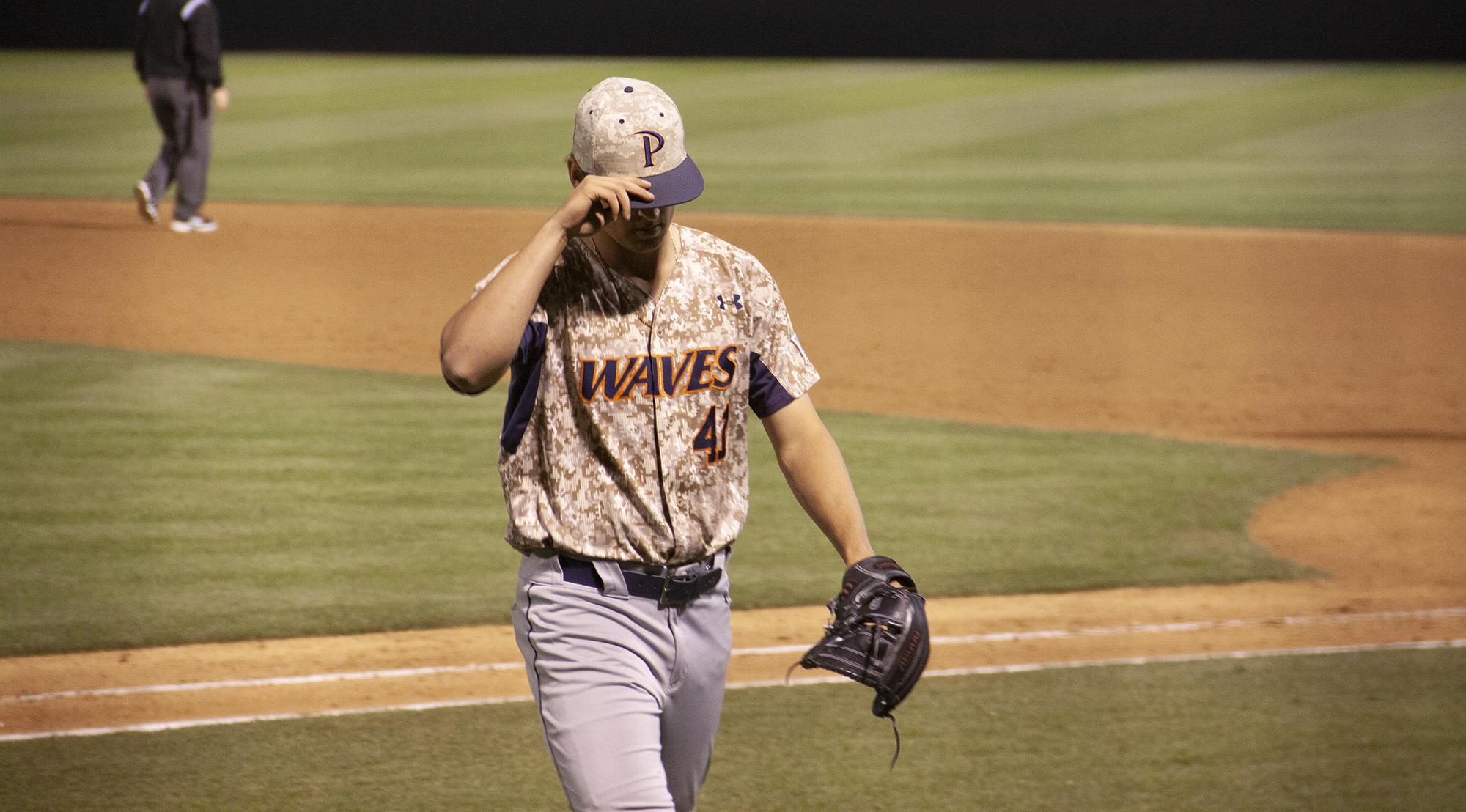 Chester walks to the bench after his lone inning for Pepperdine.

After a sweep of the Florida International University Golden Panthers, Pepperdine is now DI Baseball Ranking’s No. 24 team in the country.

Waves in Vegas: 10 Things to Know about the WCC Basketball Tournament 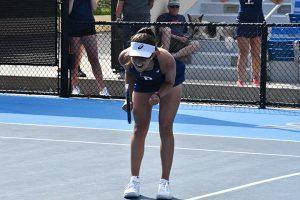 Graduate senior Jessica Failla celebrates her victory on court two, which clinched the victory for Pepperdine on Friday....
Copyright 2018 Pepperdine Graphic
Back to top