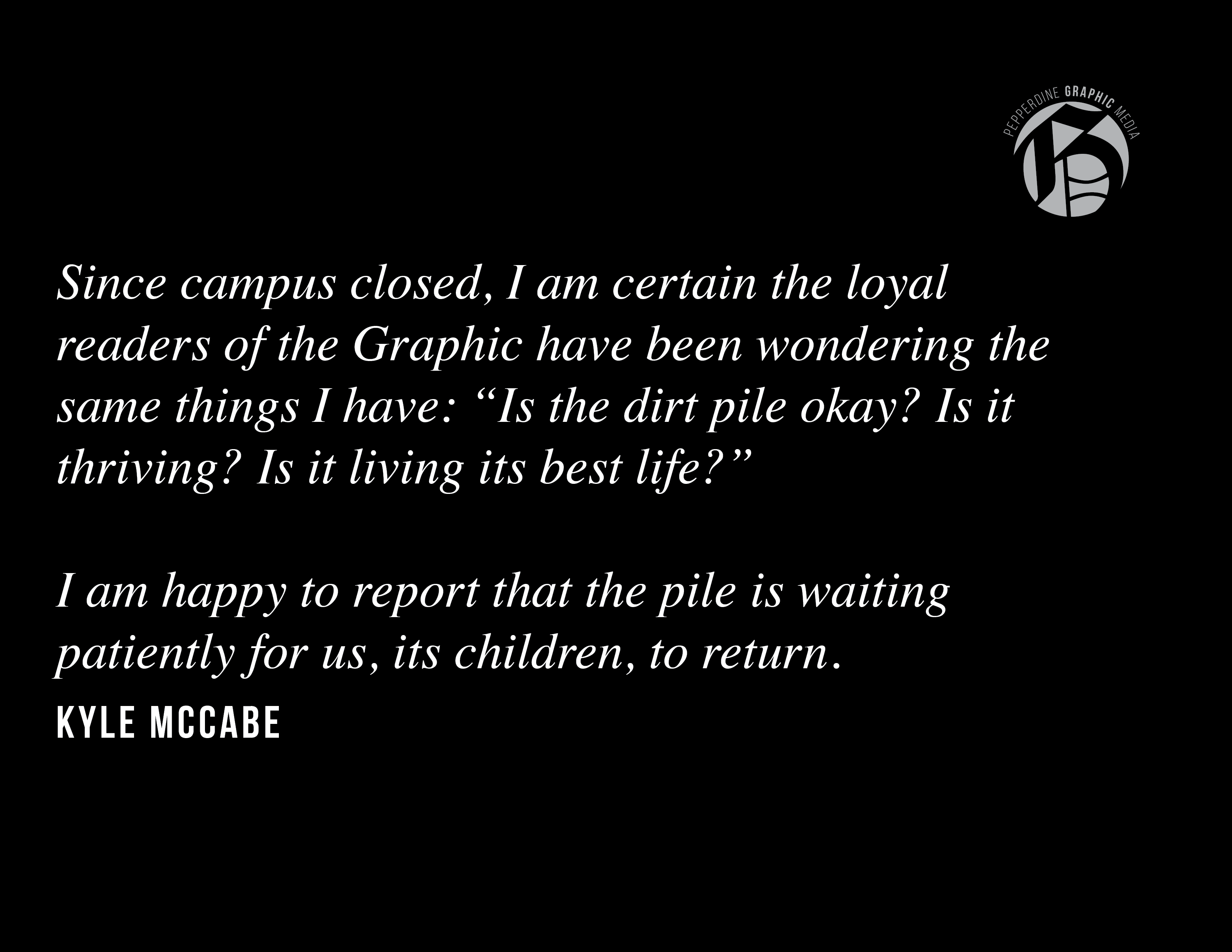 About a year ago, I wrote a story about the pile of dirt that sits atop the Drescher hill on Pepperdine’s Malibu campus. I knew I had to report on the illustrious mound when I first noticed it and thought to myself, “What on God’s green Earth is that?”

Since campus closed, I am certain the loyal readers of the Graphic have been wondering the same things I have: “Is the dirt pile OK? Is it thriving? Is it living its best life?”

I am happy to report that the pile is waiting patiently for us, its children, to return.

For those of you who do not reread my original dirt pile story every week, if those people do exist, let us review the origins and purpose of the pile.

The pile rests on a plot of land Pepperdine designated as a “balance pad” during the 2003 construction of the Drescher graduate campus. Construction projects and rain run-off displace dirt on campus, and the University adds it all to the pile because of the California Coastal Commission’s restrictions.

Most of the dirt on the pile came from on-campus mudslides after the 2018 Woolsey Fire. Pepperdine also used the balance pad as a staging area during construction projects, housing up to 200 contractor vehicles during Seaside’s construction in August 2017.

Pepperdine’s Planning, Operations and Construction department oversees the balancing pad. In a Feb. 23 email to the Graphic, the department wrote that it has not added or removed dirt from the pile since the campus closed in March.

“Although we have continued essential maintenance projects on campus, there have actually been very few ‘construction’ projects that have moved forward since last March,” the department wrote. “Most of them have been put on hold due to expense optimization measures.”

The only activity on the dirt pile since March is the Planning, Operations and Construction department spraying a biodegradable substance called soil tackifier onto the pile for erosion control.

“Tackifier is a sort of botanical ‘glue’ that keeps the surface of the dirt pile stable,” the department wrote. “Tackifier is often seeded with native plants to assist in this stabilization.”

The seeds in the tackifier have sprouted, and some students (me) think the plants make the dirt pile look like a baby just starting to grow hair.

The University created the balance pad as a potential location for a building during the Drescher campus construction. Despite this, the University has never made specific plans to build in the dirt pile’s home.

The CCC regulations prevent Pepperdine from moving dirt off campus, and according to the Planning, Operations and Construction department, no dirt from the pile has been exported.

It seems our beloved hill-on-the-hill will bewilder and excite Pepperdine students for years to come. And to me, that is great news.