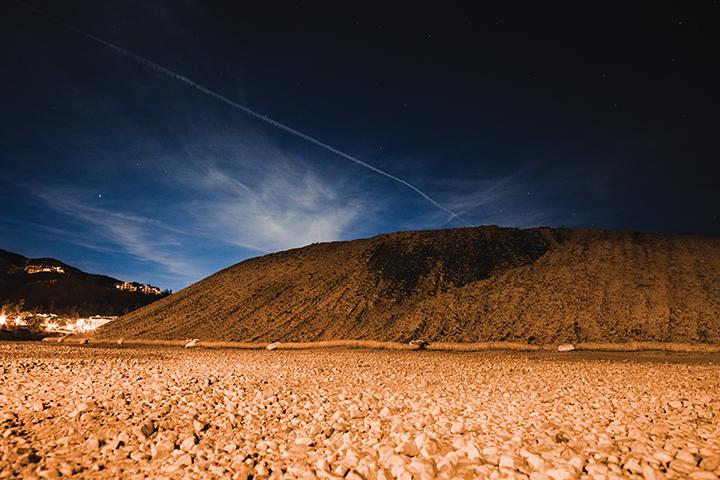 A mound of dirt sits silhouetted agains the night sky on the edge of Drescher Graduate Campus. The dirt pile is the product of post-Woolsey Fire runoff, one of several ‘debris basins’ on campus.

Perched atop the Drescher hill sits a recent addition to the graduate campus: a pile of dirt. Students can see this display of modern engineering from most anywhere on campus. It bewilders the Pepperdine community. What is the dirt pile? Why is it there? Who manifested it, and when will it leave us?

The dirt pile sits on a piece of land at the intersection of Benton Way and Catalina Drive, uphill and northwest of the Seaver campus.

Lance Bridgesmith — the associate vice president of planning, operations and construction and of the Department of Public Safety — said the dirt is on a “balance pad” that originated in the construction of the Drescher campus in 2003 as a potential location for a building, though Pepperdine never had plans to build on it. The pad holds any loose dirt produced by construction projects or landslides. The current pile mostly consists of dirt from runoff, not the Drescher campus construction 17 years ago.

“We have a number of areas that we call ‘debris basins’ on our campus,” Bridgesmith said. “Those are designed to catch the runoff and the flows that come from hills regularly.”

“Typically, what happens with half of [the plants] is that when the fire burns, it burns the whole top off, but they keep their entire root system [that] goes down 40 feet,” Grinovich said. “If those root systems are damaged, … you can see basically holes in the ground … [the fire] burned into the ground.”

Bridgesmith said Pepperdine monitored the campus’ hillsides to mitigate erosion but still prepared for an above-average amount of runoff.

“The clean out in the maintenance of our debris basins is what you’ve been seeing added,” Bridgesmith said. “They’re overdue.”

The fact that the dirt pile garners attention did not surprise Bridgesmith.

“It is really a unique situation that a lot of people don’t appreciate,” Bridgesmith said. “One, about our restriction from exporting a dirt off of our campus, and two, … what are we going to do with, where can we get and where can we put our dirt.”

The California Coastal Commission (CCC) regulates construction on Pepperdine’s Malibu campus. When the university plans to build anything on the campus, it has to get approval from the CCC before it can begin construction.

“We have a [CCC] restriction from being able to export [dirt we excavate] off our property,” Bridgesmith said. “We can’t just haul it off.”

In 2006, the CCC approved a Pepperdine proposal to remodel and expand Elkins Auditorium.

In their recommendation for regulations, the CCC wrote, “All sediment should be retained on-site unless removed to an appropriate approved dumping location either outside the coastal zone or to a site within the coastal zone permitted to receive fill.”

Similar language appeared in CCC recommendations for regulations about renovation to the intramural field in 2013 and again in a different proposal for intramural field renovations in 2016. The CCC approved the 2016 proposal, and the university excess dirt stored on the Drescher balance pad to construct the current Enhanced Recreation Area.

“[The balance pad is used for] any one of our larger construction projects that really get[s] into the ground, … any of those kinds of projects that create dirt or need dirt,” Bridgesmith said. “We’re constantly thinking of that balance pad and what the next uses are for [it].”

The university does not have any major projects planned that will use the dirt pile currently on the Drescher balance pad. Bridgesmith said there are many smaller projects that some of the dirt will be used for.