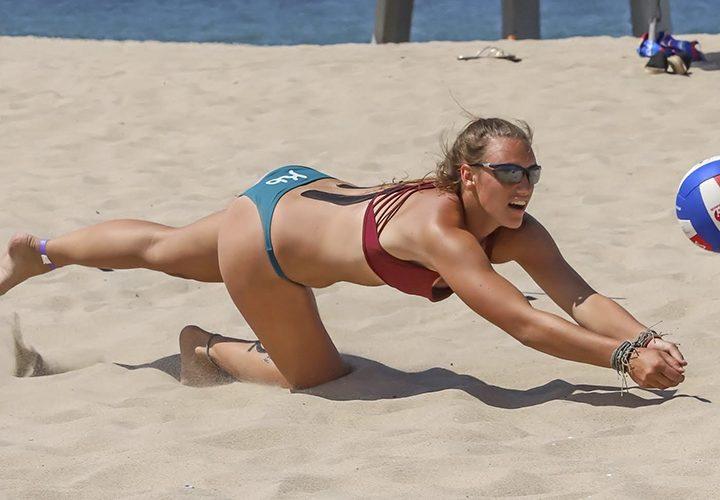 Adam Schaechterle of Men’s Tennis and Marcio Sicoli of Women’s Beach Volleyball were in the middle of promising seasons — both as sophomore head coaches at Pepperdine — before the NCAA-wide spring sports stoppage in March.

Sicoli inherited beach volley in 2019 after the retirement of Nina Matthies, a 25-year Pepperdine legend and American Volleyball Coaches Association Hall of Famer. There was no drop-off to the team’s routine success, as the Waves went 20–11 and finished No. 7 in AVCA coaches rankings.

Last season was an enigmatic year for Sicoli and the team. After starting as No. 6 on the AVCA preseason poll, the team dropped their first two matches against Cal Poly San Luis Obispo and LMU, the No. 7 and No. 8 ranked teams, respectively, in the preseason poll. After bounce-back wins versus South Carolina and Stetson, the team dropped three straight against Long Beach State, USC and No. 1 UCLA.

While the 2–5 start was a surprise for the team, Sicoli lost only four seniors and brought in six freshmen.

One of the freshmen is Gracie Pedersen, a 5-foot-11-inch prospect with serious power. From Brentwood, Tenn., she was a lifelong outside hitter in indoor volleyball before she found beach. 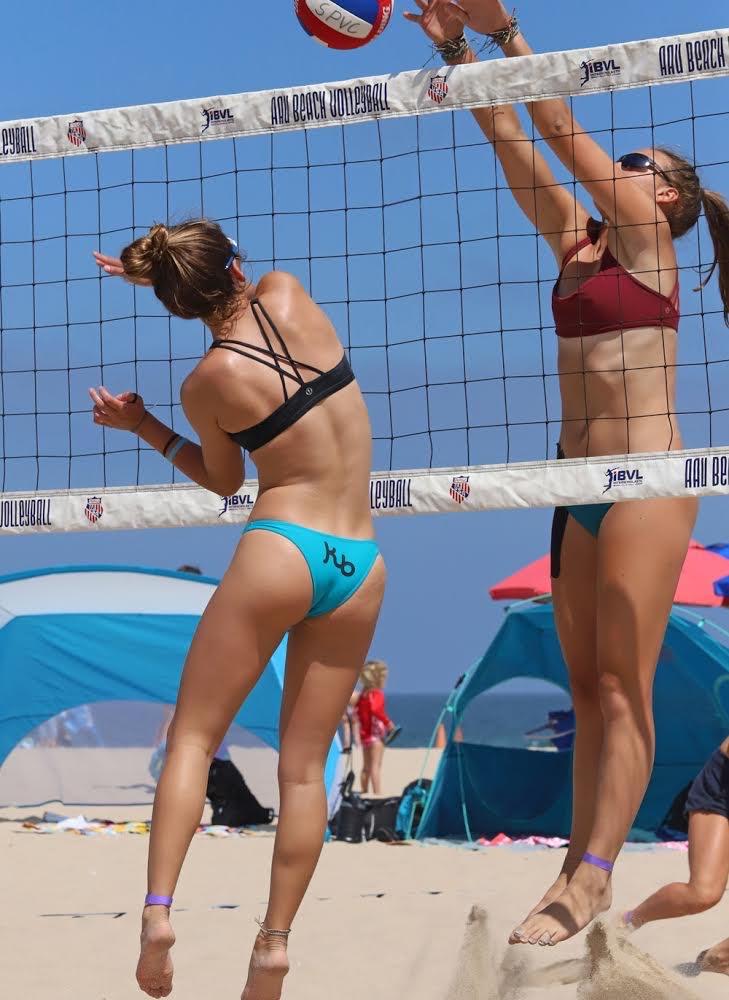 Pedersen reaches over the net for a block during a national championship game in LA. Pedersen made up for her late discovery of beach volleyball by attending a variety of tournaments during her junior and senior years. Photo courtesy of Gracie Pedersen

Pedersen said she’s loved the sport ever since.

“I fell in love with beach volleyball very late in the game,” Pedersen said. “I didn’t find out about it as a college sport until I was a sophomore in high school, and Pepperdine was a big reason why. A lot of girls start to train for it as early as eighth grade.”

Pedersen said while Tennessee isn’t known for producing beach volleyball prospects, she benefited from training with a professional this year.

“I had to travel around a lot,” Pedersen said. “Not just to play but to be recruited too. We just had John Hyden, who’s an AVP pro, move to Tennessee this year, so it was a little late, but I was happy to have him train me before college. I have not been trained at such a high level anywhere.”

Volleyball runs in the Pedersen family. Pedersen’s mother played indoor volleyball and basketball at Drake University in Iowa, and her sister, Ellie, plays indoor at University of the South. While being an indoor star in college was a dream for much of her life, Pedersen said she was drawn to beach for multiple reasons.

“First of all, the atmosphere is so much more enjoyable than indoor,” Pedersen said. “It’s not just because you’re on the beach but also because you’re playing with one other person and able to really connect, where indoor is all very rigid and methodical. Second, the two-on-two aspect gives you so much more contact and action.”

Pedersen had her sights set on attending Pepperdine before Sicoli had his sights on her. She went to the 2016 NCAA Beach Volleyball Championship in Gulf Shores, Alabama. She watched the Waves and the University of Hawaiʻi, which ended up being her No. 2 school.

Pedersen said she’s just as much a fan of the team as she is a player.

“Ever since I saw them in 2016, I’ve been watching YouTube videos about them all the time,” Pedersen said. “I’ve watched them live against Pac-12 teams like UCLA and USC. I went to national championships again in 2017, 2018 and 2019. I can tell you all the pairs, who won which matches from any year. It’s pretty funny.”

Pedersen said five out of the six freshmen are living on campus and doing everything they can to practice at local beaches. There is no projected start date or schedule for beach volleyball at this time.

For Men’s Tennis, Schaechterle did not have the luxury of inheriting a top-tier program in 2018. The team was easily one of Pepperdine’s weakest in the year before Schaechterle’s hiring, going 7–16 — the first time they had a losing record in the 2000s.

The Northwestern alum — who was hired away from Notre Dame’s staff — turned heads in his first season, nearly going .500 with an 11–13 season with eight players on the roster and no seniors. The promising debut was the precursor for a historic 11–0 run and the No. 19 national ranking in 2020.

Schaechterle brings back the entire team, including Adrian Oetzbach for a fifth year, for the 2020–2021 season. He signed Tom Grosjean as a walk-on and Guy Den Ouden in this year’s recruiting class. Den Ouden won’t join the team until the spring to compete in the 2020 French Open Junior Tournament. That leaves Grosjean, who is not on campus but at home in Boca Raton, Fla. to train.

It’s a familiar environment for the freshman, who is the son of Sébastien Grosjean, a former professional with nine combined titles in singles and doubles play who finished as the No. 4 overall player in the world in the 2002 season.

Grosjean said his dad pushed him to be the player he is today.

“It used to be easier,” Grosjean said, laughing. “As I got older, things got harder and harder with him, and at the same time, the competition got tougher, so it paid dividends for me. He’s always been so supportive of me, and with his knowledge and skill, he’s the best coach I could ever have.” 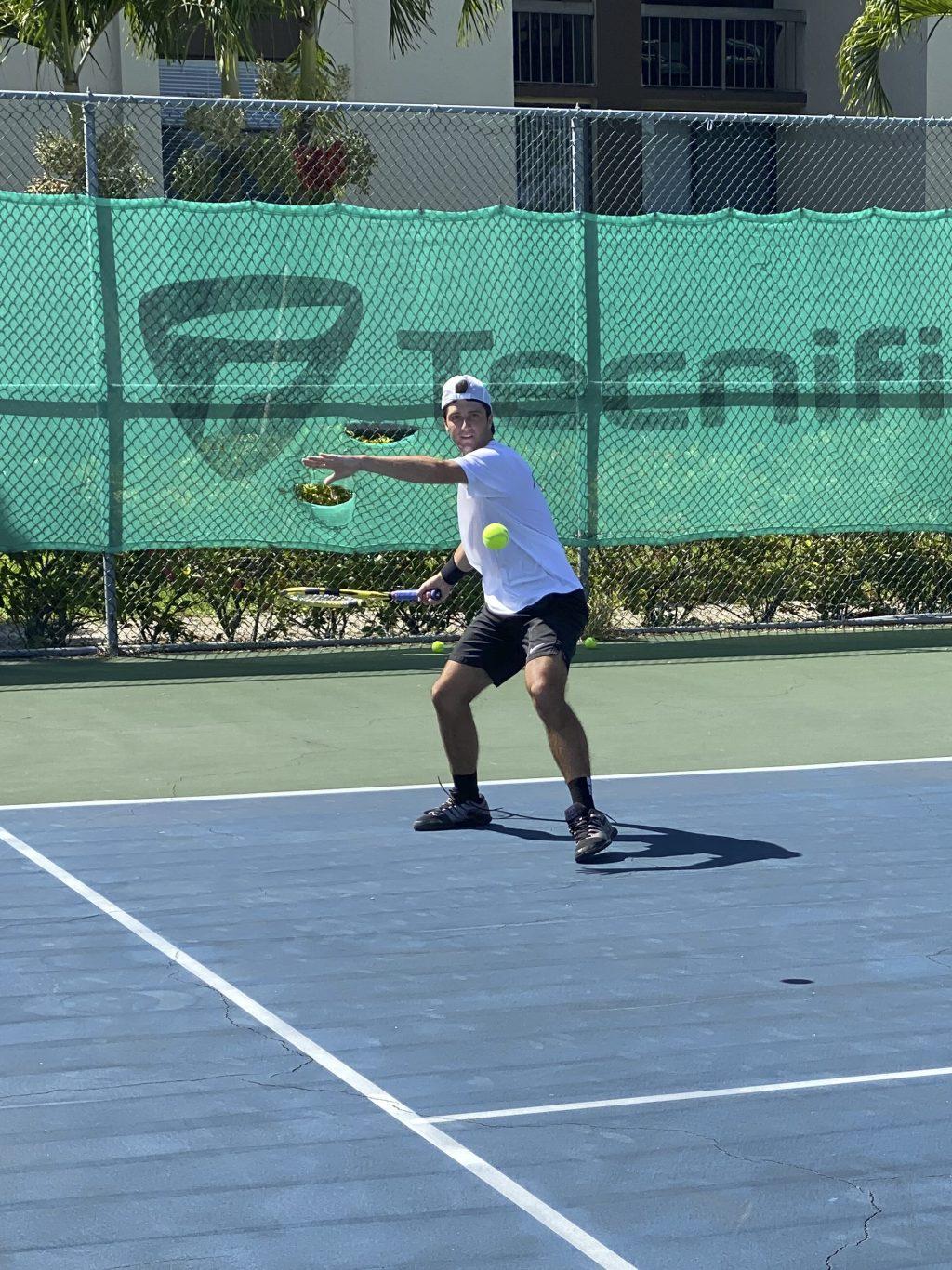 Walk-on freshman Tom Grosjean eyes the ball as he prepares to return the hit to his opponent at Tennium Academy in Delray Beach, Fla. Photo courtesy of Tom Grosjean

Grosjean said his recruiting process and getting to know Schaechterle was a memorable experience.

“I visited Pepperdine two years in a row,” Grosjean said. “I always loved the school, and Adam [Schaechterle] and Tassilo [Schmid] are such great guys to believe in me and put me on the team. I talked to a few other California schools, but it was tough finding schools with such a good program like Pepperdine.”

While Grosjean isn’t on campus, he’s training daily at his dad’s academy in Boca Raton, Fla. The only other American on the Pepperdine Men’s Tennis roster, Robert Shelton, is training there with Grosjean. Shelton is on pace to be the sixth and final player in the starting rotation this year. There are no tennis players currently living in California.

Grosjean said his strengths can be utilized on Pepperdine’s lineup in the near future.

“Being a shorter guy at 5-foot-10 I rely on my speed,” Grosjean said. “I have a high stamina, so I like when the points are long and I can work the guy. I don’t ever go for winning stuff early, but I like to draw it out.”

Schaechterle, Grosjean and the other nine Pepperdine men’s players are waiting for details on the adjusted season in the spring. 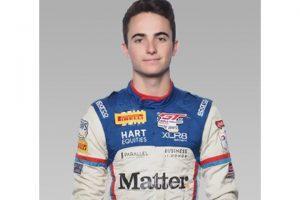 Senior Max Root poses for a headshot in his racing attire. Root, who has professionally driven for six years, drove for 10 of the 24 hours...
Copyright 2013 Jupiter Premium Magazine Theme
Back to top