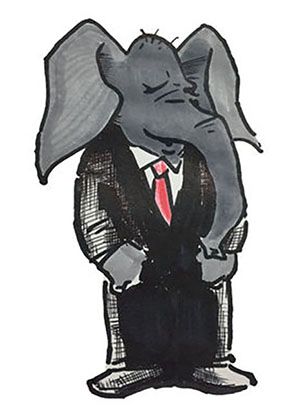 I should be a Republican. I’m fairly politically moderate, but my whole family is die-hard Republican. I even wore a McCain-Palin T-shirt in eighth grade after they had lost the election. However, this year is the first time I will vote in a presidential election, and I have found myself in some kind of political wasteland.

I, and other would-be Republicans like me, are completely unwilling to support the Republican Party Nominee for President of the United States Donald Trump and are wary of associating with the party that nominated him. Since many of those in our generation, without political allegiances to one party, are refusing to support Trump’s candidacy, one must ask: Can the GOP survive?

An early 2015 survey from Harvard University showed Americans between the ages of 18 and 29 Americans preferred a Democratic President at 55 percent, rather than a Republican President at 40 percent. However, in survey results released on August 15, the same age group overwhelmingly favored the Democratic Party Nominee for President of the United States Hillary Clinton at 56 percent over Donald Trump at 20 percent in a two-way race. That still leaves 19 percent of young voters unaccounted for.

While some of these are likely disillusioned supporters of Bernie Sanders, a U.S. Senator and former candidate for President of the United States who vied for the Democratic Party’s nomination, who are unsure where to cast their vote, many are would-be Republicans without a political home.

More than 60 percent of millennials believe Donald Trump is racist, according to the June 2016 GenForward survey. This racist perception of Trump could permanently damage the GOP in the eyes of a generation that is 43 percent non-white, as Toni Monkovic argued in his March article “Lasting Damage for G.O.P.?“

Donald Trump and his campaign have, undoubtedly, disfigured the face of the Republican party. Though it is a bold statement to say that his candidacy could destroy a 162-year-old political party, it is a devastating blow for a party that was already struggling with the upcoming generation. As a politically moderate millennial, I am inclined to avoid labeling myself in general. I do not fit well into either party. However, Trump and his controversial, hateful campaign have driven me away from the familiar GOP. If the Republican Party is to win me and many others like me back, it is up to their leadership to rebrand and rebuild their party, or it is the responsibility of the millennial generation to form a new one.