Pepperdine’s Lausanne Program participants fight it out for a win in the tug-of-war tournament Sept. 8. Lausanne returners sported matching shirts and flags as they enticed first-years to join. Photos by Mary Elisabeth

Junior Kala’i Kiaaina sported “Long Live the Queen” pin and a smile at the London booth for Pepperdine’s annual Return Sept. 8 — a celebration for students coming back from study abroad and inspiration for first-years considering International Programs.

Students swarmed Alumni Park, reconnecting with friends and considering new adventures as the sun slunk below the mountains. Returning students took part in a game of tug-of-war, while first-years entered a raffle to win an IP scholarship. Returners took the opportunity to share information in the hopes of enticing new students to “rush” abroad.

“I literally skipped class to be here because I just missed everyone so much,” Kiaaina said. “That just is a testament to how close we are. I really love everyone and I’m so excited to see everyone and excited to rep London.”

Kiaaina said she studied abroad in London for the 2021-22 academic year and wanted to go to England since she was in middle school — both because of the city’s unique nature and her obsession with One Direction.

“It is a life changing experience,” Kiaaina said. “London is such a unique city because there’s a lot of modern things and there’s also a lot of older history that’s just so iconic and such a fun city to explore and so I think you guys should definitely consider London.”

With matching shirts and students using Swiss flags as capes surrounding her, junior Maggie Hazelrigg represented Lausanne with red face paint on. Hazelrigg studied abroad over the 2021-22 academic year and said the community made her feel more involved than ever before.

“Everyone you pass in the hallway you can have a conversation with them, if you need anything they’ll be there to help you or if you need a shoulder to cry on,” Hazelrigg said. “Every time I felt like I could go to anyone and everyone, even the directors of the program, any of the employees, staff of the program, they were just so kind-hearted.”

It was exciting, Hazelrigg said, to be back in Malibu with everyone she studied abroad with.

First-year Ashley Ganey said she wanted to study abroad before coming to Pepperdine, and her top choices are Florence and Lausanne.

“Heidelberg is higher up on the list now, because I didn’t really know much about it, but I got to ask questions and learn a little bit more,” Ganey said.

“[The Return’s] been great, but honestly since we’re so small I think we’ve done a lot of events all together anyways,” Rockelman said. “We’ll have dinner at someone’s house, or do dessert, or go to the beach or all sorts of things, and so this definitely isn’t like my first time seeing all of them since we’ve been back.”

The Heidelberg program, Rockelman said, played a big part in her decision to attend Pepperdine.

“Freshmen should definitely consider Heidelberg,” Rockelman said. “I know from your first thought you might not think ‘Oh, I’m gonna go to Heidelberg, this is my top choice.’ But it’s Pepperdine’s [longest continuously held] program — it was chosen and picked there for a reason.”

Mid-way through the event, returners — who received both a food truck ticket and a free IP shirt — competed for their program in a tug-of-war tournament. With the screaming of their fellow-program participants and several falls into the dirt, Buenos Aires took home the trophy.

At the tug-of-war winner’s table, junior Dayanara Fausto said those who can should consider studying abroad because of the exposure students gain to a world outside Malibu.

“I think we need to be global citizens,” senior Priscilla Gonzalez said. “Here in Malibu, I do think we live in a bubble. So it’s very important to experience other cultures and to experience independence, like real independence for the first time, which studying abroad allows you to do.”

Both Fausto and Gonzalez studied abroad in Buenos Aires and said their favorite parts were the people and the environment of Argentina. Gonzalez said the homestay program in Argentina helped her immerse herself in the culture.

“I would 100% recommend BA,” Fausto said. “I wouldn’t change anything for the world. I think the one thing I would say for advice is just to say ‘yes’ to everything. Like be safe, be open to trying new things because I feel like the only thing I do regret is the things I said no to.”

Junior Alanna Christian said initially she was afraid to study abroad in Washington D.C.. She said coming from a small town in Texas, the adjustment to city life was intimidating. Over time, D.C. grew on her.

“I really enjoyed it,” Christian said, “And I feel like it was a huge part of how I grew to be who I am.”

Christian said she would recommend the program to others.

“I love how all the city is so condensed together,” Christian said. “You get to explore an entire city with all your friends and you also get to walk to work. You get to take the subway. It was honestly really neat.”

At the Florence table, where returners played Italian music and wore shirts decorated with the Pope, junior Cadey Comey said she always wanted to go to Italy, and the language barrier was not as challenging as she expected it to be.

First-years Makena Swenski and Lauren Anderson said one thing they discovered at the Return was regardless of the abroad program, there is something to enjoy and learn everywhere.

“I just don’t think I’m learning quite as much about the place itself, but it’s also kind of hard to learn about a whole country,” Anderson said.

Once first-year students visited each abroad program table, they arrived at the Global Fellows table and slid their stamped decorative passports into a colorful mailbox that represented their first choice country. First-years had the chance to win a scholarship to study abroad. Sadie Krotonsky won the award. 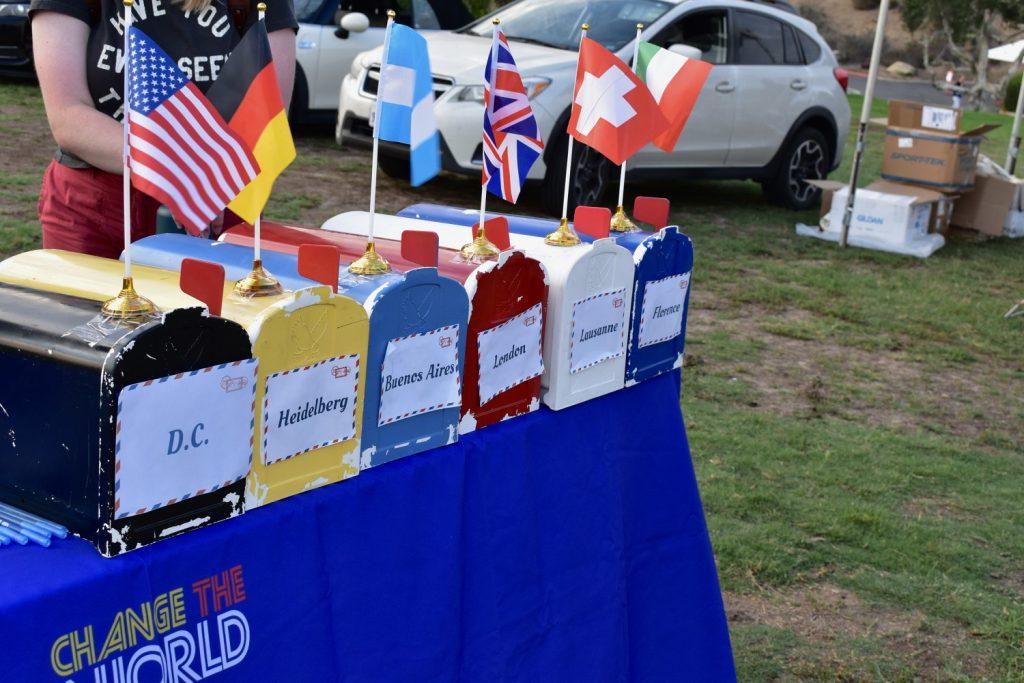 Global Fellow and senior Sophie Collins said Global Fellows is a four-year program where students chose both an international study abroad program and D.C., and learn to become global leaders.

“[The Return] has been great because a lot of us haven’t been able to see each other for years just because part of the component is going abroad,” Collins said. “So we’ve been in different places doing different things. So it’s been great to be able to reconnect to see how Global Fellows has impacted what we’re planning to do now.”