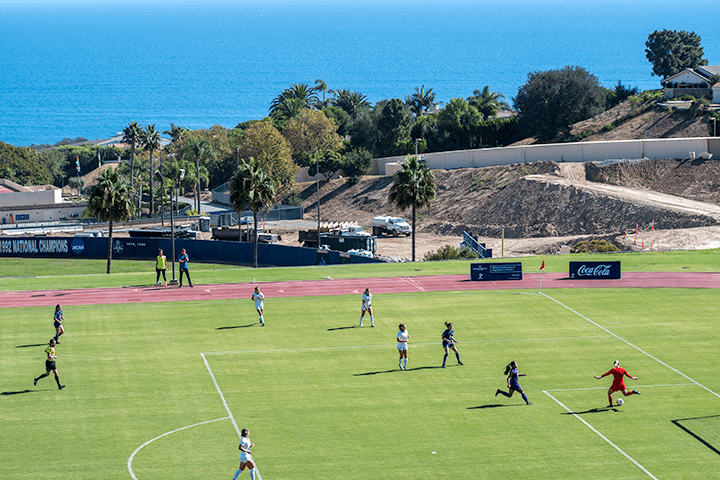 Pepperdine goalkeeper Zoe Clevely clears the ball during the Waves dominant 3-0 victory over University of Portland on Oct. 2. The Waves improved to 10-1-0 with the win, reaching their best start in program history. Photos by Brandon Rubsamen

No. 6 Pepperdine Women’s Soccer achieved its best start in program history Saturday, Oct. 2, as the team rolled to a decisive 3-0 victory over University of Portland on a sun-baked afternoon in Malibu. Junior midfielder Carlee Giammona, senior defender Trinity Watson and sophomore forward Tori Waldeck all got on the scoresheet for the Waves.

“I’m speechless, honestly,” Watson said of the team’s start to the season. “I’ve never experienced anything like this. The unity, the culture, everything about it is just perfect. We’re writing a whole new story for this program that we get to be a part of […] I think that’s a really special thing.”

The Waves, now 11-1-0 after a midweek win against University of San Diego, surpassed their previous best start of 9-1-1 from 2005.

Pepperdine — who’s past game was Sept. 19 against Texas A&M — roared to life from the opening kickoff.

Early pressure from Pepperdine culminated in a free kick about 30 yards from the Pilots’ goal, which redshirt senior midfielder Joelle Anderson curled delightfully into the box. Giammona tracked the ball to the far post and took it out of the air, passing it into the bottom right corner of the Pilots’ net.

“[Anderson] is an elegant footballer,” Ward said. “She’s got a high soccer IQ. And that delivery is really good, but, I mean, Carlee Giammona’s finish is a world-class finish. She takes it first-time out of the air, which is absolutely silly. It’s a silly finish.”

The Waves kept the pressure up after the first goal, peppering Portland with a series of crosses into the box that prompted some desperate defending. Freshman forward Tabitha LaParl tested Portland’s goalkeeper Jenny Wahlen in the 12th minute, forcing her to dive across goal to make the save.

As the game progressed, Portland worked themselves into the contest. Midfielder Nyota Katembo came on as a substitute in the 16th minute, and made an immediate impact in settling what had been, up until that point, an unnerved Portland midfield.

Along with seeing more of the ball, Portland developed numerous attacking threats later in the first half. A quickly taken free kick in the 28th minute played a Portland forward into a dangerous area near Pepperdine’s net, but redshirt senior goalkeeper Zoe Clevely was up to the task and made a smart save down to her right.

“Zoe [Clevely] is playing absolutely amazing,” Waldeck said “But we’re defending as a team. There’s not one person not back pressing, not working hard for another girl that might not be able to get back because they made a long run.”

The Waves looked a bit sluggish as the half progressed, and struggled to find sharp enough passes to cut through the Pilots defense. Through the remainder of the first half, Watson was vocal from the backline, shouting encouraging words to her teammates and attempting to galvanize the team going forward.

“Being the center-back, having the whole field in front of you is beneficial,” Watson said. “It is a role that I step into, to be able to communicate with everyone and be direct but also positive.”

As the first half bled into the second, both teams seemed to be fighting the heat as well as each other. Tempers began to flare, as the game turned into a physical contest.

Sophomore midfielder Julianna Duckett was called for a foul in the 66th minute after pushing a Portland player while vying for a header. Ward jumped off the bench and paced the sideline, hollering at the referee about the call.

“I don’t get mad,” Ward said. “But Jules just put her hands up to protect herself and the ref called a foul. And I said, ‘What is she supposed to do? Stand there and take the girl’s head to her face?’ But it’s not personal, and [the referees] understand. Right or wrong, he was consistent, and that’s all you want from a referee.”

With the game poised delicately at 1-0 and the Waves’ legs tiring, Waldeck stepped up and provided a spark of energy. After bursting forward and winning a bouncing ball that seemed to befuddle Portland’s backline, Waldeck was fouled in the box by Wahlen. The referee awarded a penalty, and Watson stepped up to bury the spot-kick down the middle.

“At that point I was only in for a few minutes, and Coach [Ward] tells us, when we come in we’re game changers,” Waldeck said. “That’s my mindset coming in: I need to change the game.”

Soccer experts have long bemoaned that 2-0 is the most dangerous lead in soccer, claiming it can prompt complacency. But the Waves, jolted by Waldeck’s energy, played the rest of the game with startling intensity.

Waldeck put the Waves up 3-0 with a moment of magic in the 72nd minute. After finding the ball on the right side, several yards outside the penalty area, Waldeck rifled a right-footed shot towards the goal. Gliding just over Wahlen’s outstretched hand, the shot nestled into the top left corner of the net.

“One of my favorite things to do is chip the keeper,” Waldeck said. “So if she’s out, I thought I might as well do it.”

The Waves almost added to their tally several times in the remaining minutes. Sophomore midfielder Skylar Enge came the closest in the 74th minute, but her shot from the top of the penalty area glanced just wide of the post.

Another close call for Portland came in the 82nd minute, when Wahlen miskicked a clearance on the right side of her penalty area. Freshman midfielder Caroline Coleman did well to intercept the ball, but couldn’t take full advantage of the keeper being off her line.

Three goals proved more than enough for the Waves, who recorded their fourth consecutive shutout when the final whistle blew. The Waves have shipped a mere five goals through 12 regular season games, giving them the best goals allowed per game in the WCC.

“It’s something special,” Watson said. “A shutout, we do as a team, it’s not just the backline. Everything we do, we do together.”

The Waves had little time to rest on their laurels, as they travelled to University of San Diego on Wednesday, Oct. 6, where they won 4-0. From there, the Waves go to Loyola Marymount University on Saturday, Oct. 9, in what will be their third conference game in seven days.

As the Waves continue their season and pile up wins, the end of Ward’s comment should not be understated.