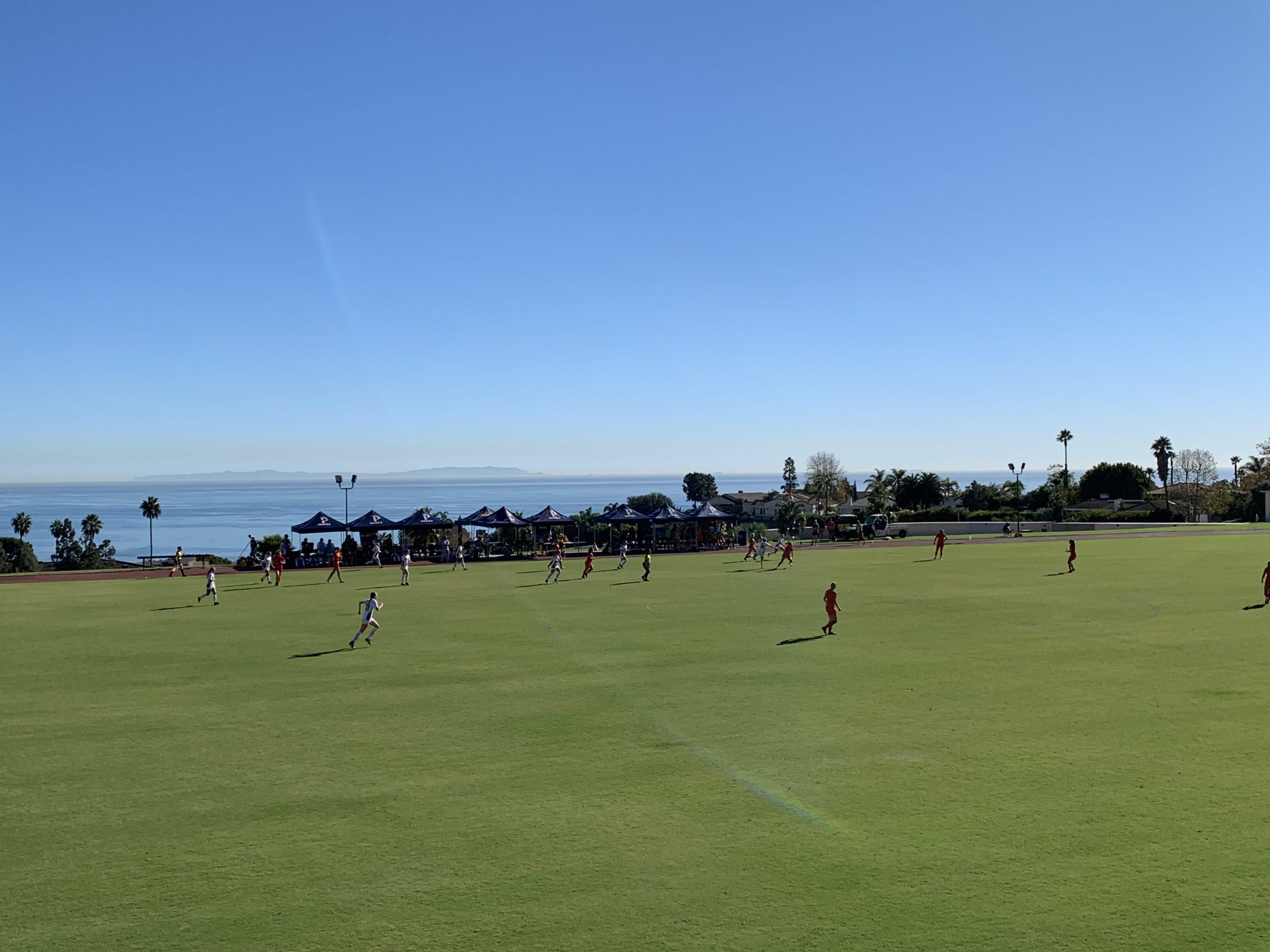 The Waves take on the South Dakota State Jackrabbits on a sunny afternoon in Malibu on Saturday, Nov. 13. With their 7-1 victory, Pepperdine advanced to the second round of the 2021 NCAA College Cup. Photo by Alec Matulka

No. 19 Pepperdine Women’s Soccer advanced to the second round of the 2021 NCAA College Cup with a dominant 7-1 display against South Dakota State on Saturday, Nov. 13 at Tari Frahm Rokus field.

“The last time we hosted [a NCAA tournament game] at home was 2017, and so I couldn’t tell you how excited I was to be back in my last season on Ms. Rokus,” Reyes said.

It was an orange onslaught from the Waves right from the kick-off, as they went up 2-0 inside the first seven minutes. In the fourth minute, Anderson fed a through-ball to Waldeck on the right side of the Jackrabbits’ penalty area. Waldeck cut the ball back across the six-yard box for Reyes, who rifled the ball into the net.

Two minutes later, Waldeck set Anderson up with a cross from the left side. Anderson completed the finish, volleying the ball into the right corner of the net.

“There were definitely some painful losses that we took,” Reyes said, regarding the end of the season. “But I think we did well on quick turnarounds from those losses. We didn’t let it shoot down our momentum at all. As tough as those were, we keep that feeling with us, and know that we don’t want to feel that way moving forward.”

Head Coach Tim Ward said the practices in the weeks leading up to the tournament were intense to ensure the team would be ready. The team has taken inspiration from a favorite poem of his, Ward said.

“I read them a Robert Frost poem last night, and somewhere in the woods two roads diverged and we took the one less traveled by,” Ward said. “That means we’ve got to stay consistent and hungry. That’s what’s made this team so incredible; their consistency all year has been remarkable.”

The Waves’ hot start continued in the 23rd minute, Waldeck pulled up from deep with a long-range effort that troubled the Jackrabbits’ goalkeeper. After the ball bounced off the goalkeeper’s hands, junior midfielder Carlee Giammona provided the finishing touch to increase the Waves’ lead to 3-0.

Sophomore midfielder Skylar Enge got on the scoresheet in the 36th minute. Enge collected a pass from redshirt senior forward Devyn Gilfoy around 30 yards from the Jackrabbits’ goal, before taking two touches and unleashing a startling, long-range effort that curled into the left side netting.

“The whole bench just exploded,” Anderson said. “That was a huge moment for our team and for Skylar. We’re so proud of her; she works so hard in practice, and to see that ball go in the back of the net was just an amazing feeling for our team.”

Pepperdine kept its foot on the gas pedal throughout the first half, as redshirt senior defender Kelsey Hill added a fifth goal in the 40th minute. Senior defender Trinity Watson launched a corner kick that bewildered the Jackrabbits defenders, and Hill latched onto the loose ball for her fourth goal of the season.

The second half began with a more even run of play, as the Jackrabbits pulled a goal back in the 53rd minute through forward Cece Limongi. But the Waves answered back with a goal from Waldeck.

Reyes capped off the afternoon’s barrage of goals in the 66th minute. Redshirt junior Olivia Packer played her into the left side of the penalty area, and Reyes bent the ball around the Jackrabbits’ goalkeeper into the top right corner of the net.

As the match reached its end, both sides made a number of substitutions to give players valuable tournament minutes.

“As we’ve learned over the years, I to think teams that make a deep run in the tournament, they’re pretty flexible,” Ward said. “They have to rely on their bench and they have to rely on different tactical setups. The idea is that a lot of women got minutes today. To get some NCAA tournament minutes under your belt is always a good thing.”

The Waves outshot the Jackrabbits 21-6, scored 7 of their 12 shots on goal and conceded no corner kicks.

Pepperdine will play North Carolina State in the second round of the 2021 NCAA College Cup on Friday, Nov. 19 in Tallahassee, Florida. The winner of their match will go on to play either No. 1 Florida State or No. 25 Southern Methodist University in the third round.

“I think we’re ready to go all the way, honestly,” Anderson said. “It’s some of the best soccer we’ve been playing since I’ve been here, and I know we’re prepared for this moment. I know we can take on anyone in the country.”