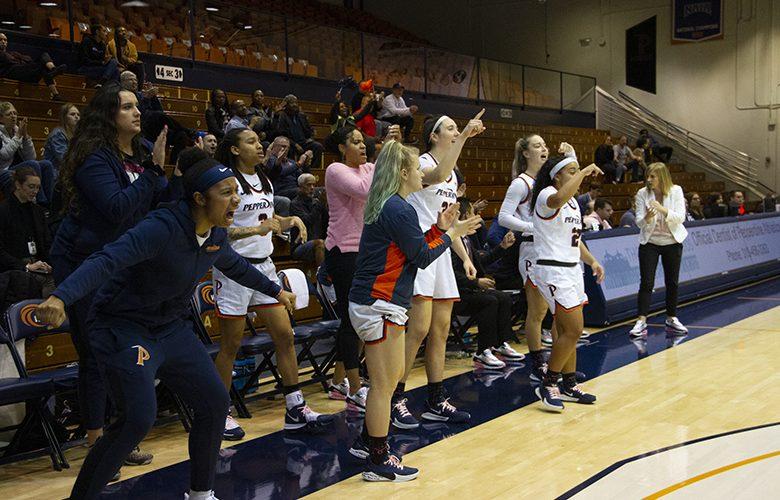 The Waves’ bench celebrates a block during Thursday’s game in Firestone Fieldhouse.

Despite leading for the majority of the game, Pepperdine Women’s Basketball fell in the closing seconds against the Portland Pilots 64–62 on Thursday.

The Waves held a 10-point lead going into the final quarter, but the Pilots surpassed Pepperdine at 58–57 with 2:48 left in the game. Sophomore guard Malia Bambrick hit a three-point shot with 14 seconds left on the clock to tie the score 62–62.

“I just wanted to keep my composure,” Bambrick said. “The play was drawn up for me, so it’s just doing what I do well and making sure that I executed our game plan.” 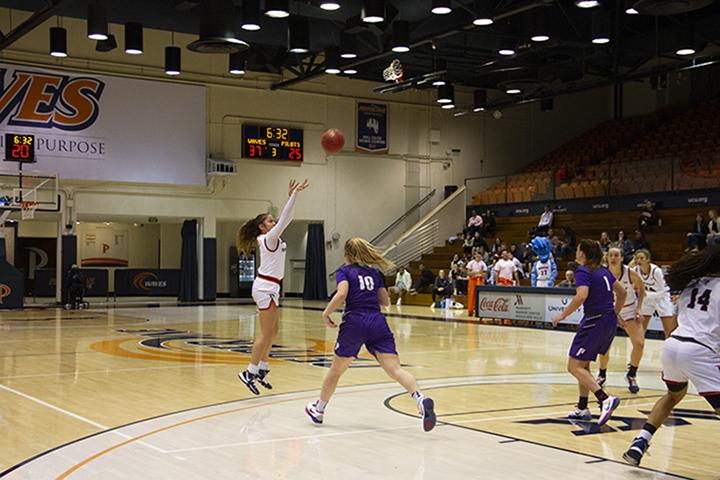 Sophomore guard Malia Bambrick skies for a three-pointer on the right wing.

Tied at 62 with four seconds left on the clock, the Pilots drew a shooting foul. Portland sophomore guard Haylee Andrews made both foul shots, giving Portland the 64–62 lead.

The Waves sent a half-court heave in the closing seconds, but the Pilots ultimately took home the win at a final score of 64–62.

“I think we played pretty well offensively with their full-court pressure,” senior guard Deezha Battle said. “We played solid defense for most of the game up until maybe the last quarter. I think we overall played hard and played our hearts out.”

The Waves started off the game strong, scoring two of the first three baskets in the first quarter. Redshirt senior guard Hannah Friend had nine of the Waves’ 14 points going into the second quarter, giving the Waves a five-point lead over the Pilots.

“Going in, we were just trying to focus on ourselves,” Bambrick said. “We lost a close one last time when we played them there [Portland], so we knew we had to tighten up little things, stick to their main scorers and just play our games.”

The Waves carried on their momentum going into the second quarter, increasing their lead to nine points 30–21 going into half. Six Pepperdine players scored in the quarter thanks to phenomenal ball movement. 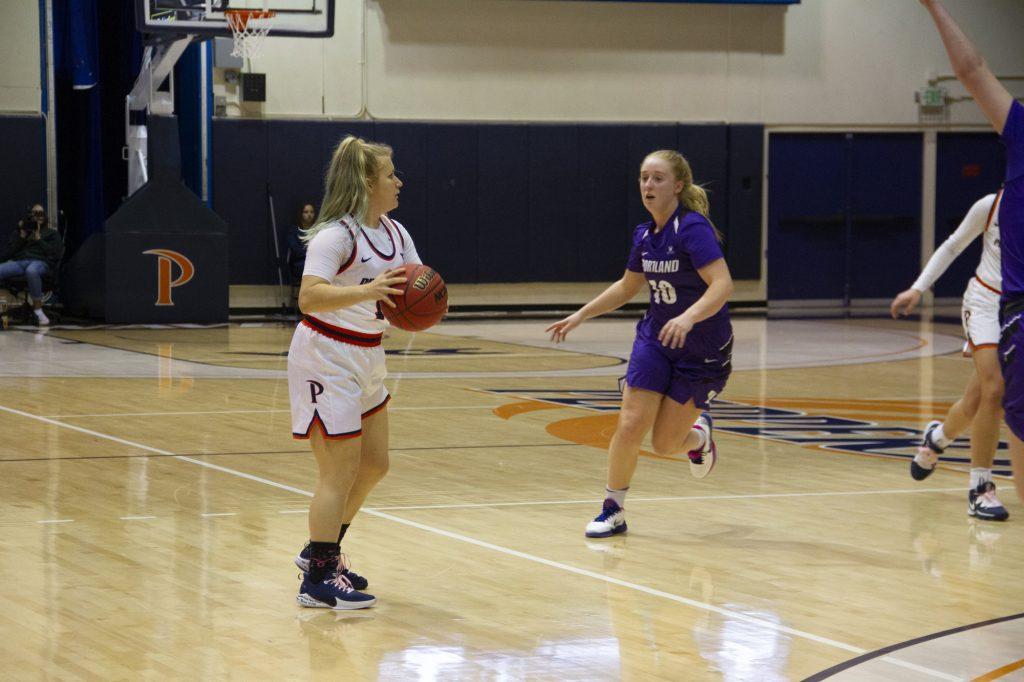 Senior guard Paige Fecske looks for a teammate after picking up her dribble.

“We took our shots whether they were falling or not, which is always important,” senior guard Paige Fecske said. “I think we played with confidence for the most part.”

Pepperdine had their largest lead of the night at 15 points at 6:33 remaining in the third quarter after going on a 10–4 run in the first three-and-a-half minutes.

The Waves went cold in the fourth, scoring just nine points on four baskets, whereas the Pilots scored 21 points including a 7–0 run.

“In some moments, we had slip-ups where we could have done a little bit better, which ultimately cost us in the end,” Bambrick said. “I think we just let this small thing slip away.” 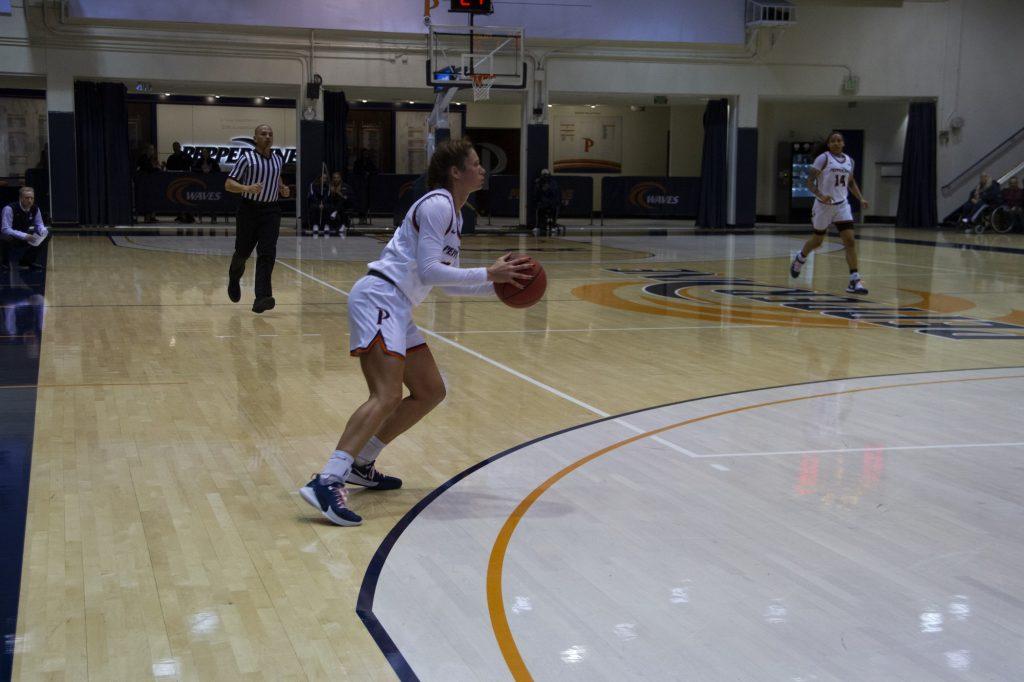 Redshirt senior guard Hannah Friend gets ready to tee up a three-point shot in the right corner.

Both Waves and Pilots dedicated the game to the Play4Kay fundraising campaign, which fundraises money for the Kay Yow Cancer fund.

“Coach Kay Yow coached for the USA team and had a big impact on women’s basketball,” Fecske said. “It’s a great way to honor her and everyone who’s survived or experiencing breast cancer.”

The Waves sported Play4Kay black and pink t-shirts to support Yow. After a 22-year-long battle, Yow passed away in 2009 to breast cancer. Yow was named national Coach of the Year eight times and received numerous accolades including Women’s Basketball Hall of Fame, Athletes in Action Hall of Fame and Women’s Sports Hall of Fame.

“I think it’s always good to just honor those who have gone through breast cancer and cancer in general — acknowledging that we support [awareness] and support them,” Bambrick said.

After falling to Portland, the Waves fell at home to Gonzaga University 64–50 on Saturday. For Pepperdine’s Senior Day, the Waves played Gonzaga closer than earlier in the season in Spokane, Washington, where the Waves lost 70–36.

After falling to both Portland and Gonzaga, the Waves are more determined than ever to win against Brigham Young University (BYU) on Feb. 27 in Provo, Utah.

“We just have to be able to handle their pressure,” Battle said. “They’re a bigger team, so we have to focus on boxing out and rebounding.” 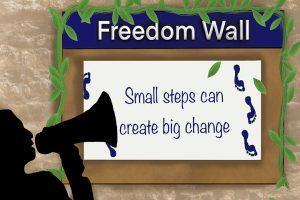 Art by Caitlin Roark People are concerned about the state of the environment much more now than they were 20 years ago. However,...
Copyright 2013 Jupiter Premium Magazine Theme
Back to top