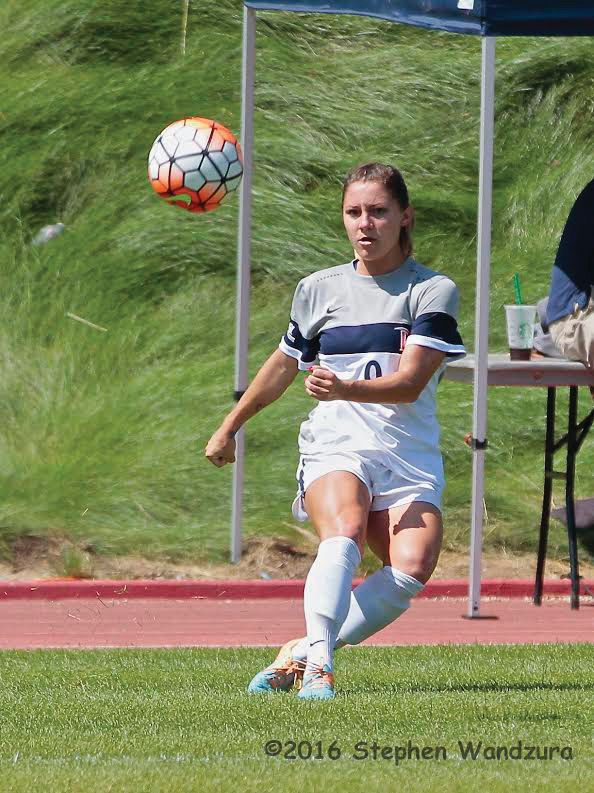 The No. 25 Pepperdine women’s soccer team hit the road for a short 2-game East Coast trip last week, playing at Maryland on Friday and at No. 3 Virginia on Sunday.

In the first match against Maryland, both teams began the match in a competitive battle throughout the first half. Although the Waves and Terrapins traded dangerous shot attempts, the score was tied 0-0 despite Pepperdine holding a 9-6 shot advantage after the first 45 minutes of play.

Entering the second half, Pepperdine’s offense came out firing away, as junior Bri Visalli got a pair of shots on goal in the opening minutes of the half. Later in the half, the Waves continued to put pressure on the Terrapins goalie, challenging the defense with three shot attempts with two on goal, but were unable to capitalize and break the tie. Maryland had an opportunity at the end of regulation to take the lead with a corner kick, but time expired and the match would move to overtime with the score even at 0-0.

In the overtime period, the Waves had an early opportunity to strike led by senior Rylee Baisden in the 92nd minute, but the shot was deflected and led to a counterattack by the Terrapins. In the 99th minute, the senior midfielder drew a yellow card, giving Pepperdine a chance to win it with a free kick from 23 yards out. Baisden, who had an opportunity to end it earlier in regulation, finally came away with the game-winning goal off of a free kick just outside the box to give the Waves a 1-0 victory over Maryland.

“It was a really well-fought victory for both teams, but hats off to Maryland for a great game,” Head Coach Tim Ward said. “It was a big disappointment for us last Sunday [in a 3-0 loss to USC], but it was a great performance today and I’m really proud of the effort these ladies put in for the victory.”

Following the win against Maryland, the Waves traveled two hours south to take on one of the top teams in the nation, No. 3 Virginia to close out their two-game road trip.

The Cavaliers’ offense dominated the first half of the game, as the home team gave senior goalie Hannah Seabert a heavy workload in goal firing away 11 shots. Despite holding the potent Cavalier offense scoreless for the first 36 minutes of the game, Virginia scored the first goal of the match with a header in the 37th minute. Virginia got another shot in the closing minutes of the first half, but the Waves defense stopped the attack, keeping the game at 1-0.

The second half would be all Virginia, as they dominated the half early and struck again for another goal in the 54th minute. However, Pepperdine had a chance late to go on the scoreboard, as Rylee Baisden got a shot off in the 81st minute, but her attempt was blocked by the Cavaliers defense. Pepperdine would end up losing the game 2-0 to split the two-game East Coast road trip.

Pepperdine will be back in action on Sunday, Sept. 11 when they travel to Cal State Northridge to take on the Matadors.