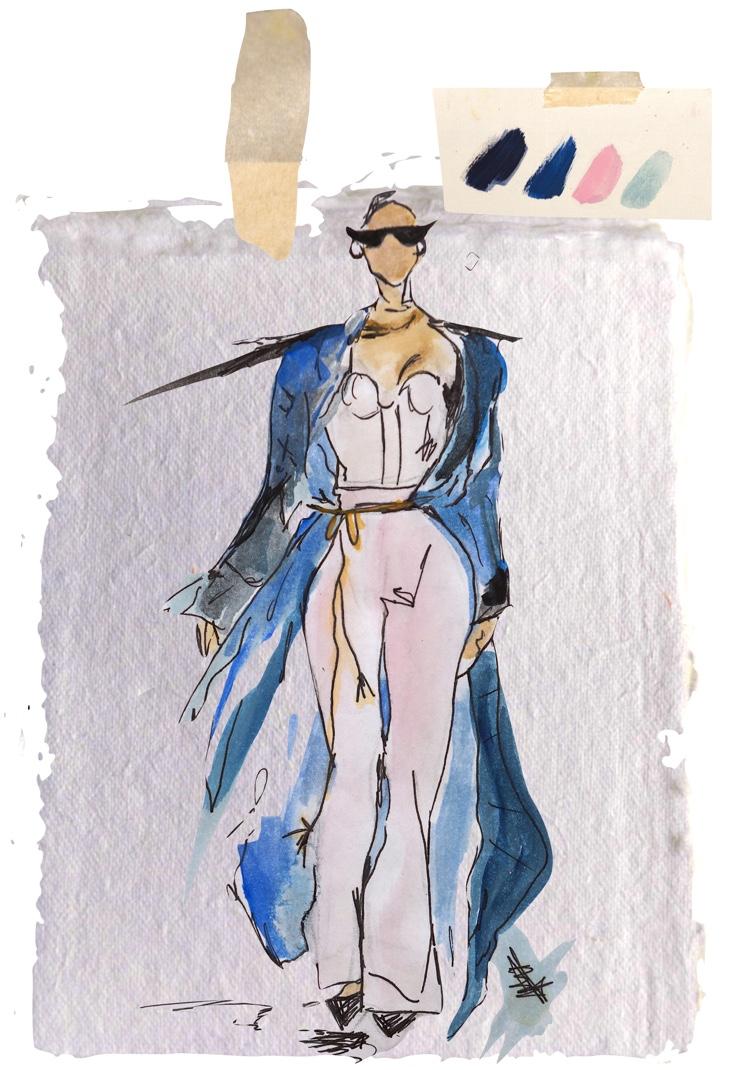 With clothes scattered across her bedroom floor and splatters of paint still drying on her now one-of-a-kind pair of jeans, senior Lawson Rudd prepared to debut her newest display of art.

Rudd works at Res Ipsa, a one-of-a-kind boutique in the Malibu Country Mart. She said the merchandise at the store inspired her to make some of her clothes more unique — often through adding her own designs to clothes to give them a story.

“I think it’s a really effective way to stand out when you wear something that really feels like yourself, or wearing something that you made, or added some flair to,” Rudd said.

Whether it is through sewing together an old pair of jeans and a quilt to make a good-as-new denim jacket or sketching on canvas sneakers, creativity has no bounds when it comes to fashion design, Rudd said.

Fashion is much more than clothes draping people’s bodies — it tells a story, brings people together and expresses creativity in a way everyone interprets differently. Fashion has less to do with what people see and more to do with its creation, Rudd said. Designers Yoni Atias and Omer Barnea said they agree.

“Fashion is rooted in craftsmanship,” Barnea said. “It’s rooted from that person who was interested in garment-making and in those techniques that allow for the construction and the foundation of garment-building, which grew into this large industry that we now call the fashion industry.”

The art of design

As owners of Attachments, a clothing brand aimed at innovation and raising awareness of social issues, Atias and Barnea said they merged their strengths to create pieces that push limits.

“A big thing that we like to focus on through every collection is learning new and innovative ways to sew with techniques that we didn’t know before,” Atias said.

Growing up in a musical household, Atias said he always wanted a creative career. Barnea, on the other hand, was interested in engineering, which he said made them a perfect design team with an eye for both style and technique.

One of their recent collections diverged from the norm, they said, with a mix of materials they usually would not sew together.

“It was based off climbing gear, and the materials we were using were like nylons, and then spandex and ribbings, and a lot of very, you know, unique combinations of fabrics that you don’t really see people working with hand in hand,” Atias said.

Atias and Barnea said their newest collection, The Worst Generation, focused on reimagining a man’s suit. In the process of creating the suits, they learned the complexity of making what many view as a basic garment.

Senior Justin Selva naturally gravitates toward original styles. When people create something that fits uniquely for themselves, he said it feels as though he is watching the evolution of an art piece.

“I even see people on TikTok who make their own stuff out of something random they buy,” Selva said. “People like creativity, people like to be inspired by visuals, and that’s something that I think is a very visual, base form of art — the human body.”

A mission of Attachments, Atias said, is to make people feel like each garment is made for them specifically.

“People can really fall in love with the techniques that make a simple garment, or the way that can make somebody feel when it fits them properly,” Atias said.

A garment’s story begins at its conception, Barnea said. The art of sketching a design onto a blank paper or using a needle and thread on a sample is where a designer begins discovering the meaning behind an item of clothing, he said, and how they want others to feel when they wear it.

“We want people to have a relationship with our clothes,” Barnea said.

It is easy, in those beginning stages of design, to think about mass production and consumption more than intent behind a design, Barnea said.

“We’re not out here chasing trends and trying to sell as many garments as possible,” Barnea said. “We want to inspire people to take a second look at things and to really get them to think deeper about the world around them.”

The art of a fashion show

Runway shows, red carpets and events like the Met Gala exhibit the art of fashion and design, Selva said.

Attachments’ fashion shows follow a narrative style. Those in attendance go for an experience, not just a viewing, Barnea said.

“For us, that’s what a fashion show is all about — telling a story,” Barnea said.

Attachments’ most recent show highlighted the homelessness crisis in Los Angeles, Barnea said. The room, runway and models embodied what it is like to be unhoused, and Barnea and Atias said they wanted to shock the audience.

The contrast between what attendees thought they would see at a fashion show — luxury and exclusivity — and what they got — reality and unrest — was meant to display the impact the homelessness crisis continues to have on the city where many people live in a bubble and ignore it.

“It kind of encompasses the whole idea of, even in LA, people think about it as, California and LA is Beverly Hills, Hollywood, the land of celebrities and rich people,” Barnea said. “Then [they] come here, and this is what you see — more homeless people than you see rich people or celebrities or whatever you want to call it. So we really wanted to raise awareness of that.”

Atias said a runway show, or any presentation of fashion, should give insight and nuance into the fashion.

“We want people to feel like there’s development in our brand and they’re seeing it unfold,” Atias said.

They put great thought into each element of a show, Barnea said — through the stitching on the garments, the lighting of the room or persona of the models.

“We love creating,” Barnea said. “We love telling a story. We love the choreography [of a fashion show], you know. We spend months and months hand-making each garment and selecting which model we think would look best in it and color-coordinating that, and then going with makeup looks to really emphasize the story.”

Selva said fashion-focused events inspire those who watch for styling ideas and also celebrate the designers behind the work.

“There’s not just one sense of meaning to the word fashion,” Selva said. “The Met Gala was a good example of like, there’s a theme, but everyone still looks different.”

With an eye for technique, Atias said he wishes the Met Gala or red carpet fashion placed more of an emphasis on the making of the clothes.

“The craftsmanship is definitely there,” Atias said. “It does take somebody who understands the construction of garments to form those shapes, you know, and for it to be wearable.”

The art of styling

Selva said his favorite part of each day is getting ready. It is a time when he feels he can give people a look into who he is through the styling of the clothing on his body.

Art is about thinking outside the box and transforming one’s imagination into something tangible, Selva said, and fashion has allowed him to do that.

“I think it’s definitely cool to mix it up a little bit and see what really works for you and realize that not everything has to be gender-based or anything like that,” Selva said. “Clothing doesn’t have to have a gender — color or pattern doesn’t have a gender.” 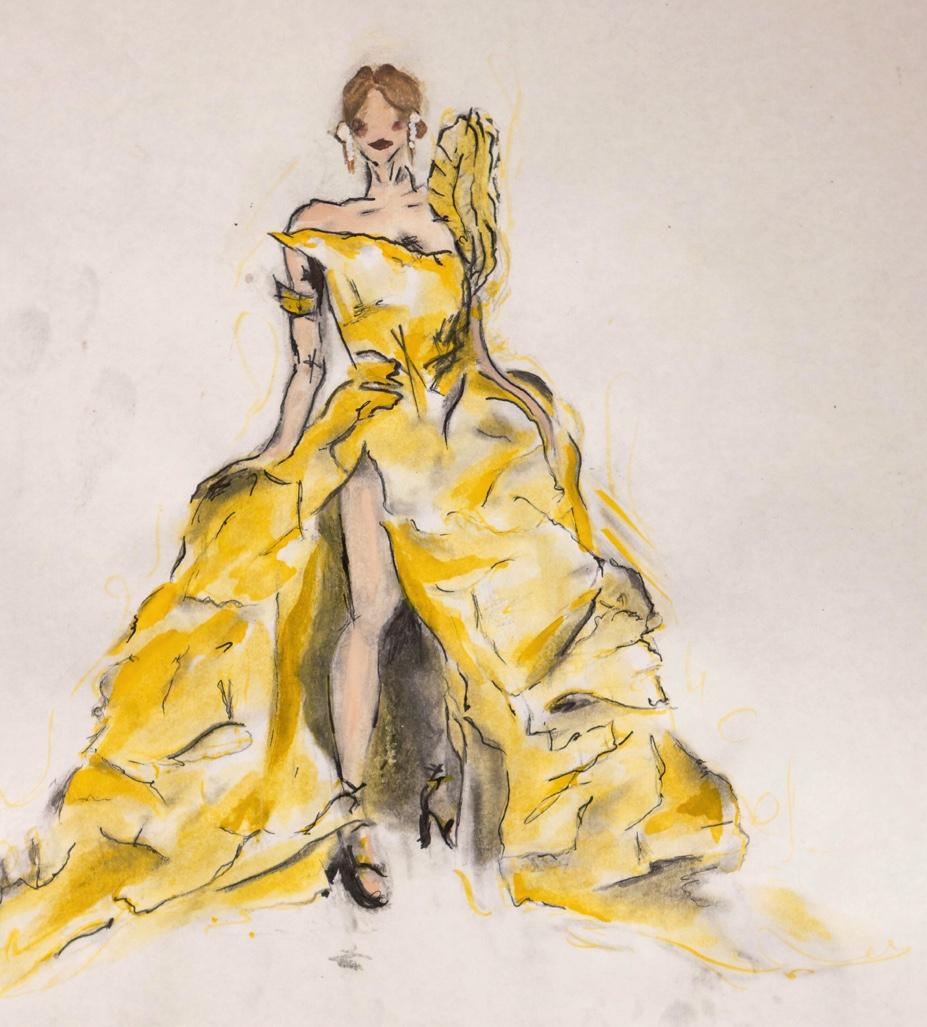 Atias and Barnea said Attachments focuses on the idea of creating cohesive yet clever looks out of materials or styles that traditionally would not go together.

“Attachments is about looking for those individual beauties in people, in garments and materials,” Barnea said.

Rudd said she does not have one approach to getting dressed — rather, the process is a creative outlet for her. She said styling her outfits is not necessarily an easy process, but it is a fun one.

Both Rudd and Selva express themselves artistically by repurposing items to wear. Selva said he often buys an oversized shirt and cuts it to fit him right.

Rudd and Selva both said they enjoy purchasing unconventional clothing — such as statement pieces made up of material that otherwise would have been thrown out — because it brings life to their outfits.

“No one else is going to understand that outfit the same way I do, and I love that,” Rudd said.