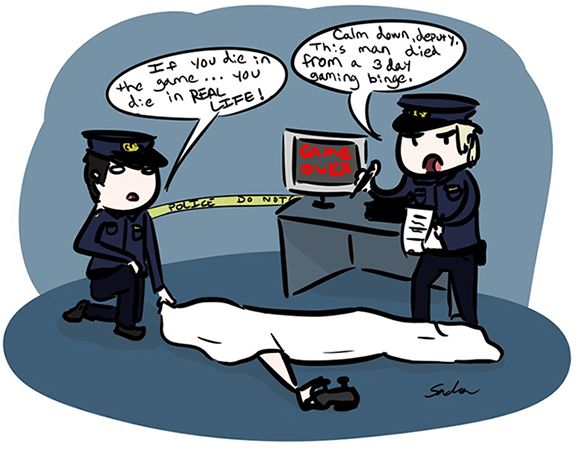 Do you ever look up from your phone and see the sun a little lower and the people around you are different from when you last looked? If so, you’ve caught yourself in phone limbo. Our obsession with technology, with either video games or social networking, is dangerous.

The effects can already be seen in younger generations, our siblings, our family members or any kid we can find. Children have tablets, phones and unlimited access to the Internet, and that is not without consequences. Here’s a story of what addiction to technology can cause.

On Jan. 8, a 32-year-old man with only his surname released, Hsieh, was found dead in an Internet cafe in Taiwan, according to a report by Katie Hunt and Naomi Ng titled “Man dies in Taiwan after 3-day online gaming binge” for CNN. Employees had discovered his body with rigor mortis setting in, and upon being rushed to the hospital, he was declared dead from cardiac failure by binge-gaming.

According to the article, what shocked police most was that other patrons in the cafe ignored the body, and only broke from their screens when police had to cordon off the scene.

Hsieh wasn’t the first to die this year from gaming. In the same article, Hunt and Ng reported a 38-year-old man was found dead in an Internet cafe on Jan. 1 after a five-day gaming marathon.

It isn’t drastic to consider these deaths in tandem with children excessively using their tablets or us college students being on our phones. The issue is seminal and can be seen beyond Taiwan and beyond the United States The issue is: We’re addicted.

“Oh no, not me,” you might say, but think about it. Remember when you last looked at your phone? Ten seconds ago? Thirty? How many times a day do you think you check it? A hundred? Two hundred? It’s too many to remember, but here are some hard facts.

Check the statistics website Analysys Mason studied how much people used their cell phones in 2011, and then in 2013, and they found we more than doubled our smartphone usage time in two years, from 98.1 minutes to 194.7 minutes, and this extended time includes the decreased “use of communication platforms and apps,” which, “fell from 49 percent to 25 percent of all time spent using the device,” according to Stephen Sale and Martin Scott in their article “Consumers Use Smartphones for 195 Minutes Per Day, but Spend only 25 percent of that Time on Communications” for Analysys Mason.

What are the apps that have replaced communication? Gaming and social networking.

As technology improves, we use it more and more, and our phones distract us as the hours slip away. We’ve been giving our minds to these machines, to games and to social apps while ignoring the life around us.

But what else is there? There’s never anything to do, right? Wrong.

If you look up from your screen, you might see the sun shining off the ocean in waves of shimmering blue or catch a smile from someone walking by. When your attention isn’t focused on four inches of Internet, you can be involved in more tangible moments — ones you will remember.

Here are two free apps that can track your phone usage: Moment for ios or My Data Manager for Android. They operate in the background and give you total time of phone usage and a breakdown of the time spent when you unlock or pick up your phone. These are worthy investments.

Seeing how much time is spent on a smartphone might encourage you to partake in some new activities — to listen to the people around you and enjoy the scenery.

Who knows? You might find yourself enjoying your day or laughing at an overheard conversation. You might be able to sit without distractions and let your mind wander.

Sure, your phone might miss you, and it might buzz. But it can’t make the day brighter or darker, and it can’t make tomorrow more certain. It will just seem to make more noise.