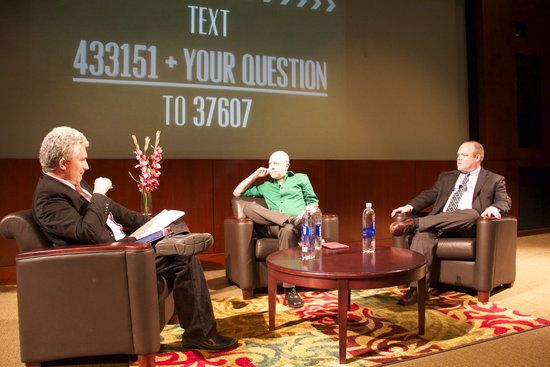 Justin Lee and Ron Belgau have been friends for years. They’re both self-professed computer nerds. They’re both committed Christians who grew up in Christian households. And, they’re both openly gay.

Although they have much in common, the pair of friends have very different views about sex, relationships and the Bible. Lee and Belgau presented their respective arguments at a two-night Convocation event called “Transforming the Conversation” on March 24 and 25 in Pepperdine University’s Elkins Auditorium.

The event, hosted by the Office of the Chaplain and the Dean of Student Affairs, focused on practical tips for ending the culture war and then shifted to a conversation about how to interpret the Bible on the issue of homosexuality. Transform, hosted by the Director of the Center for Entertainment, Media and Culture, Craig Detweiler, was designed to instruct students how to bring a Christ-like attitude to an often-hostile discussion. Both events included presentations, dialogue and the opportunity for questions from the audience.

On Side A of the Great Debate is Lee, the founder and executive director of the Gay Christian Network. Lee believes that God blesses same-sex marriages and argues that marriage is a good thing, regardless of the gender of the two parties. Lee interprets the Bible on homosexuality in the context that it is not in a committed relationship. He says the Bible has a theme of grace trumping law.

On Side B is Belgau, who is a philosophy graduate student at St. Louis University where he also teaches Medical Ethics and Philosophy of the Human Person. Belgau believes that sex should be between a man and a woman and that God calls gay Christians to lifelong celibacy. He interprets celibacy as a way of strengthening service to the Lord in Scripture. Belgau said celibacy does not mean isolation, and that one can have a deep-meaning relationship without sex.

Although the two are in the midst of strong theological disagreement, they both agree that they can be used as vessels to move the conversation forward. The two provided eight practical tips for gracious conversation including defining your terms, seeking first to understand and emphasizing friendship in the midst of disagreement (see infographic).

Can a Christian campus like Pepperdine do anything to help or make it safer for those who identify as gay or are contemplating coming out? Belgau said that the campus shouldn’t use Transform as a conversation about the LGBT community, but that it should be a conversation with the LGBT community. Likewise, Lee expressed that the campus needs to be a safe haven where people, gay or straight, are able to express their opinions or questions without being labeled a bigot, homophobe or even a counterfeit Christian.

“There needs to be safety for people to talk about their experiences and openness on the part of the campus to listen,” Belgau said.

“I’m impressed by this [Convocation]. It was cool to see that the community wants to be engaged in this,” said junior Jonathan Buckley.

The first Transform event featuring Lee and Belgau was in 2012. Buckley says that the difference in campus culture and engagement has changed for the better.

“I think it’s a long overdue start to the conversation,” Osborne said.

Lee and Belgau said it was not their intent to try to persuade the audience to join Side A or Side B. They simply want to encourage the campus to view the Bible on homosexuality as an issue to wrestle with.

Mark Davis, Dean of Student Affairs and one of the sponsors of the event, hopes that the two-part series is the beginning of an ongoing dialogue.

Exploring faith and scholarship in an atmosphere like Transform, he said, is a demonstration of the university’s affirmation statement.

Transform provided a platform to explore faith and scholarship. Davis said that the Convocation and conversation was a demonstration of the university’s affirmation statement which reads: “Truth has nothing to fear from investigation.” 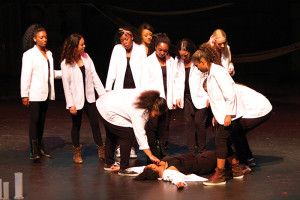 Photo by Marisa Padilla The Pepperdine Step Team has left audiences in awe of its unique dance style many times before....
Copyright 2013 Jupiter Premium Magazine Theme
Back to top