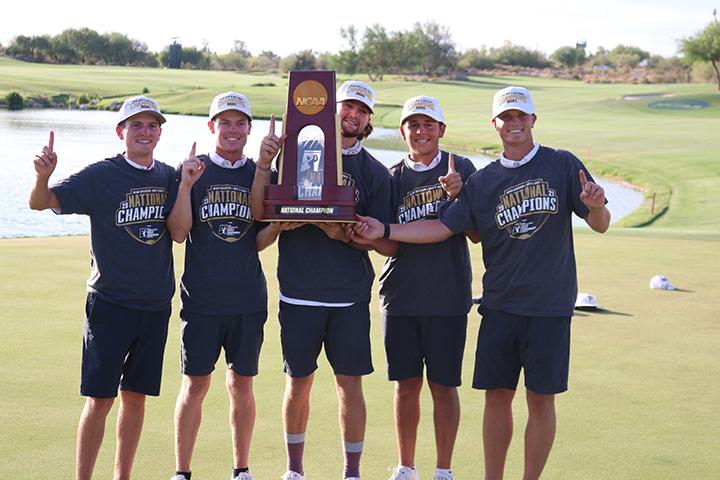 Pepperdine Men’s Golf‘s 2020 season ended with the team ranked No. 1 in the nation but unable to chase a national title as the COVID-19 pandemic cut the season short.

In 2021, the Waves finished the job, defeating Oklahoma on June 2, to secure the second national championship in program history.

“It’s something we talk about all the time — we look at anything that we do like, ‘Is this going to help us win a national championship?'” Head Coach Michael Beard said. “It’s a whole other thing to actually do it. It was a little surreal just to have the opportunity and then to actually pull through — I don’t even quite know yet, actually.”

The team won 3-2 to complete six consecutive days of championship golf at the Raptor course at Grayhawk Golf Club in Scottsdale, Ariz. Redshirt senior Clay Feagler, who passed Beard for the most rounds played in Pepperdine history during the tournament, won the clinching match on the 18th green.

The Waves defeated Oklahoma 4-1 to win the East Lake Cup in October 2020 in what Golf Channel called an NCAA Championships preview.

The sequel lived up to the billing, as the Waves and Sooners battled on every hole for more than four hours in the Arizona heat.

Match play at the NCAA Championships pits five individual players from each team against each other, with one team needing to win three individual matches to win the team match. Scoring by hole determines matches, rather than total number of strokes.

With temperatures well into the triple digits and wind speeds above 10 miles per hour, sophomore Dylan Menante and junior Joe Highsmith were the first to tee off for the Waves. Both got the Waves off to a hot start, each leading their matches by two holes after the first three holes.

Highsmith, utilizing a meticulous short game, took a three-hole lead over Oklahoma’s Garett Reband after the fourth in Match 2. Highsmith was the only player in the tournament never to trail in any of his matches.

“In match play, I never really got ahead of myself, never thought too much about outcome or winning the tournament,” Highsmith said. “I just stayed focused on the shot in front of me, and that was really my secret to playing well.”

Menante conceded his lead as he made the turn in Match 1, but Highsmith continued to lead his match.

Oklahoma junior Logan McAllister took a two-hole lead over Pepperdine senior Joey Vrzich in Match 4, hitting an ace on the eighth hole. The hole-in-one gave the Sooners momentum, and after two-and-a-half hours of play, only Highsmith led his match for Pepperdine.

Menante battled back against redshirt senior Jonathan Brightwell, taking a one-hole lead through 13, and Mouw did the same in Match 5.

Each match remained close as the players advanced through the back nine at Grayhawk, with the exception of Highsmith in Match 2, who held a commanding lead.

Brightwell held off Menante to give the Sooners a 1-0 lead, but Vrzich won four consecutive holes to take a one-hole lead in Match 4, and Mouw took control against Cummins. Highsmith finished his match 4-and-3 to even the competition 1-1.

Mouw closed out the anchor match 4-and-3, leaving the match in the hands of Feagler and Vrzich in matches 3 and 4.

“I told Coach I wanted to be the anchor match and I wanted the best player,” Mouw said. “I just knew if I executed my game plan and my strategy for today, I knew I could get the job done.”

Vrzich went one down at the 17th, but Feagler held a one-hole lead into the 18th. After Lorenz hit his tee shot into the fairway bunker, Feagler needed to two-putt to tie the hole and win the title. Feagler rolled his putt close enough to the hole that Lorenz conceded, giving the Waves the trophy.

The Road to the Final

Pepperdine’s run in Scottsdale was far from smooth, as the Waves sat in ninth place after three rounds of stroke play. Pepperdine shot nine over par as a team, and Beard told Pepperdine Athletics, “We struggled.”

In the fourth round May 31, the Waves needed to move into the top eight to qualify for match play for the first time in program history. The team did that and more, shooting nine under par, the best round of any team in the tournament and best in school history at nationals, moving up into third place.

“That’s all part of it — the highs and the lows that you go through — and it’s just how you deal with them,” Mouw said. “We dealt with them really well this week. You got to accept the pressure and enjoy it.”

The following morning, Pepperdine defeated Florida State in the quarterfinal, with Feagler and Vrzich winning their matches handily and Highsmith pulling away late. Menante played into the second playoff hole before the Waves clinched the match, while Mouw was locked in a battle with Haskins Award winner John Pak when the match ended.

Highsmith clinched the match with a dramatic chip-in at the eighth.

Are you kidding us with this one, @PeppGolf? They're on to the #NCAAGolf semifinals tonight! pic.twitter.com/7GdyTesTMy

In the afternoon, the Waves teed off against Oklahoma State in the semifinal, beginning their sixth round at Grayhawk in five days.

Feagler was the first Wave to clinch, hitting a hole-in-one at the eighth to turn his match around and win 2-and-1.

Menante jumped to an early lead throughout and won his match 3-and-2, giving Pepperdine a 2-0 lead.

Highsmith maintained a narrow lead throughout his round and eventually became the clincher again, this time on 18 after a bunker shot to give him the putt he needed to halve the hole and win.

The Waves were ranked No. 1 in the country when their 2020 season ended in March.

For 2020-21, Feagler and fellow senior Joshua McCarthy returned for a fifth year to pursue a national title, and the Waves won three of their first four events of the season, with McCarthy earning medalist honors at two of them.

“We proved to many people that we were good last year, but I think we were sneaky and we felt that we were better than last year,” Mouw said. “I don’t think many people realize that. It was really cool to come through and show what Pepperdine is all about.”

When the calendar flipped to 2021, Pepperdine remained the No. 1-ranked team in the country in the Bushnell Golfweek coaches poll.

The team struggled in the first three months of 2021, dropping to No. 6 in the national rankings and finishing as low as seventh in a tournament.

Nevertheless, the Waves peaked when it mattered most: winning the Western Intercollegiate on April 14, then dominating the field at the West Coast Conference championships. The Waves won the WCC title by 24 strokes and Feagler defeated Menante in a playoff to secure his second individual conference title.

“That’s just kind of how golf is — there’s ups and downs,” Highsmith said. “It’s crazy that we were able to all play so well at the right time.”

The NCAA Regional in Cle Elum, Wash., was also a rollercoaster, as the Waves were tied for fifth place with one round to play, needing to finish in the top five to qualify for nationals. Pepperdine turned in the best score of the day in the third round, securing a bid to NCAA finals for the third time in four seasons.

Vrzich will return to use his final season of NCAA eligibility at Pepperdine, while fellow seniors RJ Manke and Austin Murphy will move on, Beard said.

Feagler and fellow senior McCarthy used their eligibility and will depart, but the Waves will return a strong cast with Vrzich, Highsmith, Menante, Mouw and junior Derek Hitchner.

Beard, the 2020 National Coach of the Year, will enter his 10th season in the fall.

“We don’t have a guy, a number one guy — we got five of them,” Beard said. “Actually we have more, but this week we had five of them. That helped us win — we didn’t have to count on one guy.”