The Intruiging Saga of Title IX 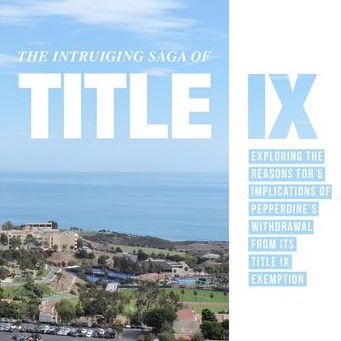 In the past year, college campuses across the nation faced a period of unrest and transformation. Students protested and fought for equal rights in racially diverse and LGBTQ+ communities. Sit-ins, protests and rallies led to a presidential resignation at the University of Missouri, a newly established LGBTQ+ club at Pepperdine University and heated discussions about ongoing sexual assault on college campuses.

Conversations about race on traditionally White campuses, such as Yale, Princeton and UVA, led to heightened awareness about continued discrimination, according to an article by Nick Anderson and Susan Svrluga titled, “2015: A year of tumult on college campuses,” published by the Washington Post on Dec. 25, 2015, describing the tumultuous college events of 2015. Discussions about gun control surfaced alongside major lockdowns at six different universities, according to the article.

Protests about racial inequality at Pepperdine led to the removal of a culturally insensitive wooden mural in the cafeteria as well as continued protests this semester about the Christopher Columbus statue on campus. This year, these discussions continue on many campuses, including Pepperdine’s, with the recent removal of its Title IX exemption. Although Title IX has become a frequently referenced piece of legislation, it continues to be misunderstood.

The Title IX amendment essentially serves to protect citizens from sex discrimination of any kind. The original purpose of the Title IX amendment, which was signed into law by former President Richard Nixon more than 40 years ago, was “to avoid the use of federal money to support sex discrimination in education programs and to provide individual citizens effective protection against those practices,” according to the Department of Justice’s website.

“Title IX also requires schools to take steps to prevent and remedy sex-based harassment, including harassment based on a student’s gender identity or gender nonconformity,” Sally Dunaway, a staff attorney for the Department of Education’s Office of Civil Rights, wrote in an email. “When a school knows or reasonably should know of possible harassment, it must take immediate and appropriate steps to investigate or otherwise determine what occurred.”

Exemptions are submitted by the highest ranking official at the educational institution and specify which elements of Title IX are found inconsistent with the religious organization. These exemptions have caused an uproar from LGBTQ+ advocacy groups as they essentially allow for discrimination against these students.

An entire list of all schools nationwide that have applied for and received responses for Title IX exemptions can be found in the Religious Exemption Index from the U.S. Department of Education.

Pepperdine University applied for a Title IX exemption in 1976, which was subsequently granted in 1985. The original request for exemption was submitted by former President of Pepperdine William Banowsky and stated the elements of Title IX that were inconsistent with tenets of the Church of Christ.

The request included other specific sections that the University was seeking exemption from. Some of these exemptions included disciplinary action toward persons involved in heterosexual sexual relationships outside of marriage and also toward homosexual relationships. It also requested the right to exclude women from all programs designated for students preparing for the preaching ministry, including loans, scholarships, awards, employment assistance and also “the leading of devotionals in mixed audiences in daily chapel, the annual lectureship, or similar programs.”

Pepperdine University held its exemption until Jan. 27, although it was never utilized in any situations, according to President Andrew K. Benton’s letter. With the intention of revoking Pepperdine’s exemption to Title IX discrimination regulations, specifically regarding female and homosexual students, President Benton sent a withdrawal letter to the Department of Education’s Office of Civil Rights, which read:

“Please accept this letter as Pepperdine University’s withdrawal of its 1976 request for an exemption from certain provisions of Title IX of the Education Amendments of 1972. The 1976 exemption request was granted by the Office for Civil Rights (OCR). Since that time, the University has not asserted its exemption. While the University continues to be controlled through its affiliation with the Churches of Christ, within the meaning contemplated by Title IX, the University is committed to complying with Title IX.”

Benton asserted his decision was less reflective of a shift in culture at Pepperdine and more a sign of the times.

Benton said he was not aware of the exemption until recently, but added that he understood Banoswky’s acquisition of it more than 30 years ago.

Edna Powell, chief business officer and former Title IX Coordinator, said she supported Benton’s decision but also anticipated at least some resistance from outside the university.

“I think there are always going to be some who oppose [the withdrawal] and feel that you are going the way of the culture, or something like that,” Powell said. “But I feel, that for the majority, and when it comes to the Christian faith, it comes down to love and acceptance … It’s not some rule that we just write down; we’re talking about people.”

Pepperdine hired a new Title IX coordinator for students, La Shonda Coleman, as of Sept. 18. Coleman’s responsibilities include responding to any issues regarding sexual violence, intimate partner violence, as well as sexual discrimination based on gender identity, in addition to her role overseeing Pepperdine’s compliance with Title IX. Coleman has extensive experience with sexual assault, as she worked at the Santa Monica-UCLA Rape Treatment center and said she takes her responsibility at Pepperdine very seriously.

“It’s a shared responsibility to ensure that the campus is safe, and it’s all of our responsibility to know that if any member of the community is harmed through gender-based violence, or sex-based discrimination, that we know that they have the right to receive services, to receive support and to prevent that from occurring,” Coleman said.

Cameron Hart, senior and president of Crossroads, Pepperdine’s first LGBTQ+ club, reacted to the exemption by asserting that Benton’s withdrawal of the exemption was nothing more significant than removing an outdated label.

“There’s a certain point where the wellbeing of students outweighs antiquated institutional provisions, and this was exactly the case with President Benton’s decision,” Hart wrote in an email. “The Pepperdine community may say that this marks a significant shift in the University’s commitment to its religious tenets, but I can see no noticeable difference in the treatment of students prior to and after the exemption removal.”

Pepperdine has had a rocky past with LGBTQ+ relations for initially denying an LGBTQ+ club, as well an ongoing lawsuit from two lesbian basketball players against their coach. Although LGBTQ+ relations still have a long way to go, there has been some improvement, Hart wrote.

“In the three years I’ve spent as an undergrad, things have improved; however, current LGBTQ+ relations are not ideal and they never will be,” he wrote. “But I think the ultimate goal is to establish a livable community where LGBTQ+ students are not just tolerated, but they are welcomed, respected, and given opportunities to engage in thoughtful conversation with their peers.”

The Future of Title IX

Across the nation, discussion concerning Title IX exemptions has raised a number of questions regarding necessary disclosure of such exemptions to potential and current members of the school community. As a result of this idea, a new bill made its way through the California State Senate and was approved by Gov. Jerry Brown on Sept. 30.

An additional change to the regulation surrounding Title IX was a “Dear Colleague” letter, sent from the Obama Administration. The letter summarizes and explains how to appropriately deal with Title IX regulations concerning transgender students. The letter offered “significant guidance,” as opposed to additional legal requirements, and asserted that the Title IX amendment should be read in such a way that it includes prohibition of discrimination “based on a student’s gender identity, including discrimination based on a student’s transgender status.”

As the culture of the United States continues to change, so will its legislation. Title IX is a dynamic regulation that continues to affect college campuses across the nation as it grows and changes alongside the students that it serves. Pepperdine and other communities are continuing to further the conversation surrounding equality and LGTBQ+ relations, as well as making relevant changes on campus. With a new Title IX coordinator, the on-going Title IX lawsuit and continued protests on campus, Pepperdine’ s relationship with its legislation continues to grow and change.

Alec McPike and Cassandra Stephenson contributed to the reporting of this article. 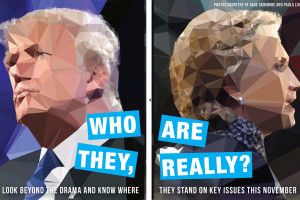