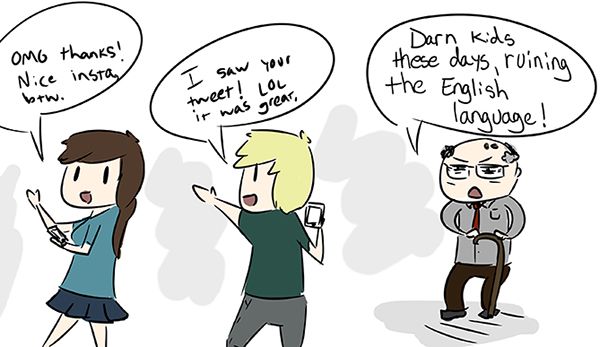 I think we can all agree that technology is amazing and affects all of our lives. We have easy access to the entire world and all the knowledge in it (we mainly use it to watch cat videos, but that’s beside the point). The thing is, we’ve all heard that before. What I want to focus on is how technology, specifically the Internet, has affected our language, an aspect I feel is often ignored.

It’s something we’ve all experienced. With every “TMI,” to every time you’ve ever talked about the latest “app,” technological advances have shaped our language. I believe we can agree that new words are necessary to give names to innovations — and when we don’t make new words, we inevitably need to change the meanings of old ones. We changed the meaning of the word “tweet” from the sound a bird makes into what one does on Twitter, and we have brought Internet slang and placed them IRL.

Notice how above I kept saying “we”?

That’s because an aspect of language that truly makes it amazing is that the people who use it control it. These semantic changes are a natural part of any language. Without these changes, we might have been stuck with Shakespearean English, and if Shakespeare hadn’t made changes to the English language of his own, we might still be stuck with a medley of Old English quirks.

It turns out, grammar rules often bend to common usage, not the other way around. As Betty Birner writes in her article “Is English Changing?” published in the Linguist Society of Americain 1999, “the King James Bible translates Matthew 6:28 as ‘Consider the lilies of the field, how they grow; they toil not.’ In a more recent translation, the last phrase is translated as ‘they do not toil.’ English no longer places ‘not’ after the verb in a sentence.”

If these language changes have been occurring for millennia, what makes technology so important? My argument is that technology is so crucial in shaping our language because it has increasingly expedited the process. I’m not the only one with this opinion. Robert Lane Greene writes in his Nov. 20, 2013 article “Johnson: Don’t fear the Tweeter” for The Economist that “Technology may speed up this process (in ways that can be unsettling to some), but it also allows people (and not just the young) to be inventive and experimental, perhaps more than ever before.”

More than just expedite, I would say the Internet adds to language in terms of jargon. Sites such as 4chan, Reddit, Tumblr and Hacker News are essentially niche communities, each with its own unique set of words and phrases. Inevitably, these terms leak into the “real world.” Text speak acronyms, the lol’s, brb’s, tfti’s, and gtg’s — all of which have invaded the English language, and have, as some would argue, debased it.

More often than not, every five years or so, pseudo-intellectuals will begin to deplore the state of the English language. There’s an inevitable cry of how the new generation is “dumbing” down the language, and how the new generation has debased it to the point of no return. There’s a history of this. As Gerard Van Herk writes in his Feb. 24 article titled “Technology and Language: What Changes, What Doesn’t” published by the University of Newfoundland reads, “The idea that language is getting worse, or that standards are slipping, has been around for a long time. Sociolinguists James and Lesley Milroy (1985) associate this with a widespread ‘complaint tradition’ in which believers assume that language (and manners and other social traits) used to be perfect at some defined earlier time, and that everything’s gone downhill thanks to music, or rowdy youth, or slack teachers or, frequently, new technology.”

It’s a viewing of the past through rose-colored lenses and the belief that new is worse. But if history has shown us anything, it’s that languages change whether people want them to or not. Language, like any other human accomplishment, is a process. It does not have some set end point — not if it wishes to advance. In order to have the grammar rules we have now, the former ones had to be consistently broken by masses of people, and a lot of the phrases we have today were once considered “slang” or “unwelcome changes.”

Without the younger generation messing with it, English would not be anywhere close to what it is now. It’s through rule breakers that we’ve reached the point we’re at now. So keep mixing in Internet language with your vernacular, and adapt new phrases. After all, the only languages that never change are the dead ones, and English is far from that. 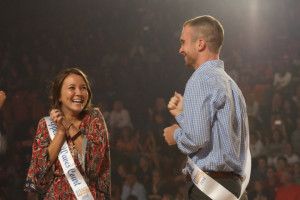 Photos by Marisa Padilla On Oct. 17, my life was forever changed. For those of you who live under a rock or simply...
Copyright 2018 Pepperdine Graphic
Back to top