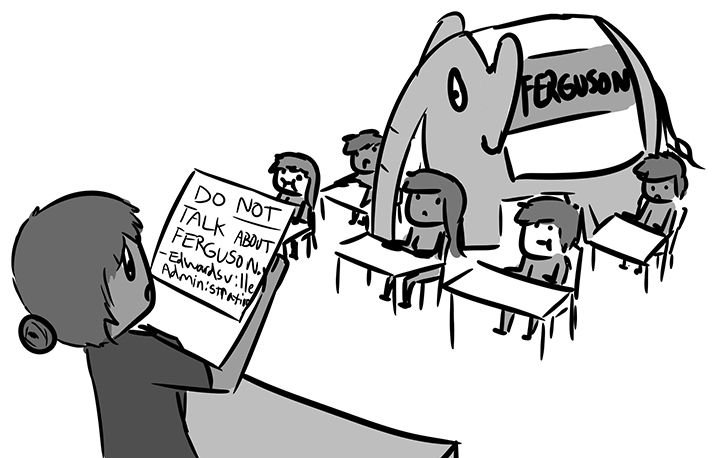 Open dialogue must be inserted in education systems around the country to facilitate healthy understanding of the situations in Ferguson.

Recently, a school district in a St. Louis suburban town received backlash after the principal of Edwardsville High School sent a memo to teachers urging diversion of conversation with any sign of Ferguson talk.

Edwardsville High School is my alma mater. It is where I earned my diploma, and it is where I grew up. According to a statement the Edwardsville Intelligencer provided on Aug. 22, the memo was sent in order to alleviate parents’ worried phone calls and threats of their children turning the issues violent. But that does not settle my nerves. While the initial intention of Principal Dennis Cramsey was understandable, silencing the community about racism and socioeconomic disparity is never a good idea. School should be an open forum to discuss current situations like these.

Edwardsville is a small suburban town marked with Volvos and chain stores. It is aggressively composed of middle-class whites who may have not yet explored the world beyond the Midwest. Meanwhile, the surrounding suburbs are factory towns crippled by the economic crisis. By just looking at average household incomes, one can see the economic disconnect between Edwardsville and one surrounding town, Granite City. According to city-data.com, Edwardsville families have an annual average income of $72,266 while its neighbors earn $40,953 on average.

This sadly reflects most of St. Louis in general: a city drastically divided from one street to the next. The Washington Post has showcased this divide after recent events in a feature article on Aug. 22 regarding the one boulevard that most marks the divide of the city: Delmar.

Delmar lies in the middle of St. Louis and separates privilege from poverty. The reality is that one part of the street can lead to a life of prosperity while the next block is usually riddled with poverty and violence.

This is not a new concern for the city or the country: BBC shared a video in March of 2012 displaying the same problem. The video showed the drastic difference of median household values along this infamous street. Looking at one side, one can see old Victorian homes with average values around $335,000, while across the street, the average values are around $73,000. We can no longer accept the brainwashed notion that allows us to believe everything will be OK when this divide is present but not discussed.

St. Louis may be miles away, but Pepperdine exhibits similar divides among our communities. It is easy to wrap ourselves into our predominately privileged bubble. A Graphic article from Dec. 24, 2013 noted our school identifies itself as 50 percent diverse, but the student population still tends to segregate along ethnic lines.

Driving down Pacific Coast Highway, it is easy to be in awe of luxurious mansions. The median household value of Malibu is $901,196 while L.A. homes are marked at $421,700, according to city-data.com. Unless a major conflict erupts like Ferguson, it is easy to act as if racial and social divisions do not exist, and if you do, labels are attached that mark you as radical or drastic. This is not OK.

Communities cannot continue in their bubble of avoidance — these problems are persistent and discussion is necessary.

These communities should use Ferguson as an opportunity to engage in conversation and hopefully create dynamic understanding regarding relevant social issues. There have been examples of such open discussion, as seen in other issues of the Graphic, and I encourage such dialogue to continue. Also, classrooms should participate in such discussions in order to develop a more open minded and realistic idea of the issues we live with daily. Education should not just be what is formed on paper — the heart of education should be engagement and rhetoric on societal issues.

To avoid the shutdown of discussion due to lack of preparedness among teachers, as was the case in Edwardsville, teachers should have resources that allow healthy engagement of discussion. This could begin as a faculty meeting to provide useful tactics that help create an open-minded classroom environment.

Edwardsville, St. Louis and the rest of America need to stop acting as if nothing is wrong when our backyards are being torn up. If communication cannot be facilitated in an educational environment, then we are not going to make progress.

This matter is not something that is going away with more news — it is gaining momentum around the world. Local educators must be willing to put the textbook aside for one moment to discuss reality.

This is not some distant country you learn about accidentally in an atlas — this is our home. This is our country. From high school to university, dialogue is required in order to aid understanding and create a better community.