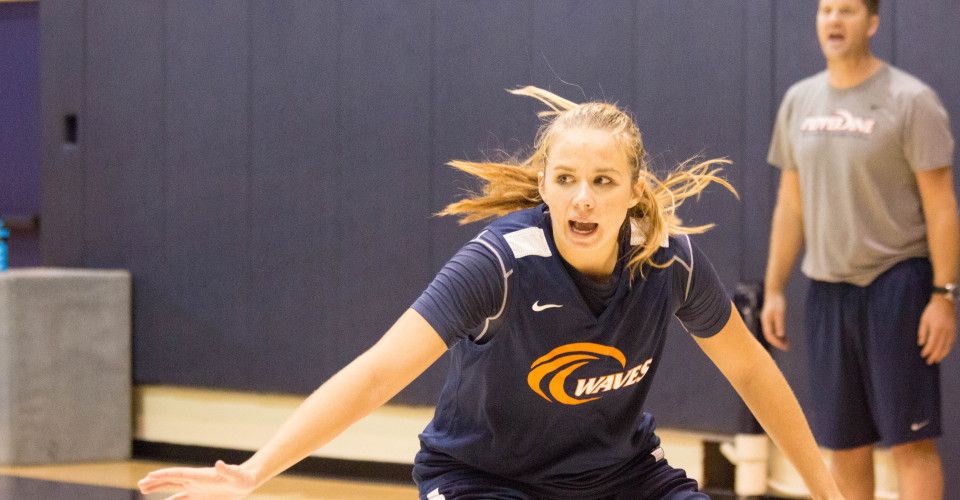 For this Pepperdine Women’s Basketball season, the ball is in the freshmen’s court. Of the 15 members on the team, 13 are underclassmen. Four of those underclassmen are freshmen: Lauren Craig, Hayley Duren, Barbara Sitanggan, and Becca Lazuka.

While these first-years are not well versed in college ball yet, they’re no strangers to the game. Lazuka began playing basketball at age 8, Sitanggan at age 6 and Duren at age 5, the players said. Craig was unavailable to comment. Although they picked up the game at different ages, basketball has been a significant part of their lives ever since.

While playing high school basketball, they grabbed Pepperdine’s attention. Sitanggan and Lazuka, were even scouted together from the same team at Troy High School in Orange County.

Lazuka admired how the university put “a lot of emphasis on getting to know us as people during the recruiting process and putting the initiative to call us and check in [on our seasons]. I think it was a lot more personal compared to how it is at other schools, I think it was a really great fit for us,” she said.

Craig also felt a call to play for Pepperdine, according to a press release on Craig from the Pepperdine Athletics site.

“Pepperdine is an ideal school for me because it has a strong sense of community, has an outstanding academic reputation, and is a great environment,” Craig said in the press release when she was first added to the team. “I felt very comfortable from the minute I stepped on campus. All of the people I met were kind and supportive.”

These four newcomers were chosen both for their court presence and their personalities, Sitanggan said.

“Besides on the court from a coaching standpoint, I know the school really looks at our character, and how we carry ourselves, who we are as an individual, as women, things like that,” Duren said. “We really do represent Pepperdine.”

Coach Weisenberg has already singled Duren out as a leader who has a knack for blocking shots, finishing at the rim and shooting from three-point land. Weisenberg also said she is very vocal on the court.

“We’ve had a lot of sheep, but no shepherd and so all of a sudden here comes the shepherd that I think isn’t there yet, but she’s definitely a work in progress on that part of it,” Weisenberg said. Duren even shepherds over players her senior, Weisenberg said.

When asked how she feels about being viewed as a leader, Duren said she does not think of herself as one, and that the success of the team is a collaborative effort.

“I think anyone has the same capabilities as I do with talking, opening our mouths, showing from actions. Just because I’m a freshman doesn’t mean any of us can’t be a leader and I think that that’s what we’re trying to find now as a team,” Duren said. “We need someone that can step up. I think we all have the ability to become that leader whether it’s a freshman, sophomore, junior or our one senior we’re starting to realize that anybody needs to take this upon themselves and lead our team because we are so young and we are an inexperienced team.”

Weisenberg also lauded Sitanggan for her natural knack for the game.

“Barb, she is something really special,” Weisenberg said. “She’s got great court vision, she’s got a knowledge of the game and she’s very smooth on the court.” The coach recognizes Sitanggan as a talented shooter who is well respected by her teammates because she “sets them up so well to be successful.”

Weisenberg said he could see Duren and Sitanggan either making the WNBA or an international team post-college ball.

“I know a lot of teams already have their eyes on them and see how good these two are,” Weisenberg said. “It’s gonna be fun to see where they’re at after their senior year.”

In the meantime, the freshmen athletes are balancing court time with socializing and academics. Their kinship continues off court whether they’re having nightly group dinners in the Waves Cafe, as Duren said, going to church together as Sitanggan said, or “holding each other accountable” in their studies, as Lazuka said.

“We all genuinely love each other, on the court and off the court,” Lazuka said. “I think it makes it a lot easier when playing because there is a mutual respect we all have for each other.”

Hayley affirmed Lazuka’s statement expressing how inseparable the team is. If she does not see a teammate off the court within a couple days, she begins to miss them, she said.

Weisenberg also recognizes his new team members’ period of adjustment to the culture of college.

“In college, you got all the other aspects that you’re dealing with. I mean, mom and dad are no longer making dinner, and kids gotta do laundry and the stress and all that. So as a coach, you gotta balance it. In the pros, we practice, we do all our good stuff and then we go home,” Weisenberg said regarding the difference between his time coaching in professionally — he has coached in the NBA, WNBA and New Zealand’s National Basketball League — and currently for Pepperdine Women’s Basketball Team.

“They’re adults. You don’t have to worry about ‘em too much. I’ve got three children of my own and then I’ve got 15 (the Pepperdine team) that I worry about as much as I worry about them (his children). They’re handfuls, but they’re good handfuls,” Weisenberg said.

Despite the transitional period that comes with their first year at Pepperdine, these freshman will contribute a youthful force when going up against other teams, Weisenberg said.

“Ultimately it’s going to be a good thing because they’re going to get experience,” Weisenberg said. “This is a great opportunity to really build from freshman on up.” 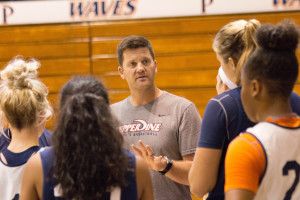 Photo by Milan Loiacono One look at the Women's Basketball roster tells a lot about the season to come. The 13-player...
Copyright 2013 Jupiter Premium Magazine Theme
Back to top