Photos courtesy of Kara TylerWhile college students try to avoid reading books outside of class, sophomore Kara Tyler spends her free time writing one.Tyler said she has been in the process of writing her debut poetry book over the past year. What started as journaling slowly became a passion for writing poetry.“Poetry was just kind of the way I reworked my thoughts into … END_OF_DOCUMENT_TOKEN_TO_BE_REPLACED

Photos by Sherry YangAmerican politics are riddled with anxiety and Christianity can do something about it according to the new book, “This American Moment: A Feminist Christian Realist Intervention.” The author, Dr. Caron Gentry, discussed her new book with the Pepperdine community on Monday, Sept. 24, packing the Surfboard room with students and faculty.Gentry's … END_OF_DOCUMENT_TOKEN_TO_BE_REPLACED

According to Eric Schlosser, nuclear war is still a global threat and everyone should be worried. On Wednesday, Sept. 5. the fiery red glow of the atomic bomb filled a small theater in Malibu City Hall.It was the work of Schlosser, an investigative journalist and filmmaker, who screened his experimental film “The Bomb” at City Hall as a part of the Malibu Library … END_OF_DOCUMENT_TOKEN_TO_BE_REPLACED

Photo Courtesy of Manny Sanoja Manny Sanoja is an author and MBA student at Pepperdine University. He lives nearby in Oak Park and recently published his book “Enlightened Awakening: A Practical Guide to Self-Awareness, Hope and Healing.” In this book, he writes about self-discovery and reflects on life and death through a Christian perspective. “I grew up in a … END_OF_DOCUMENT_TOKEN_TO_BE_REPLACED 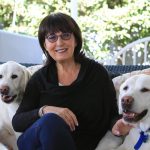 Madeleine Sherak teaches children the importance of empathy in her book, "Superheroes Club."Sherak is a Pepperdine University student-teacher education field supervisor who oversees and offers guidance to students teaching kindergarten through 12th grade as part of their majors. She tackles themes of empathy and acceptance in her children's book, "Superheroes Club." The book … END_OF_DOCUMENT_TOKEN_TO_BE_REPLACED