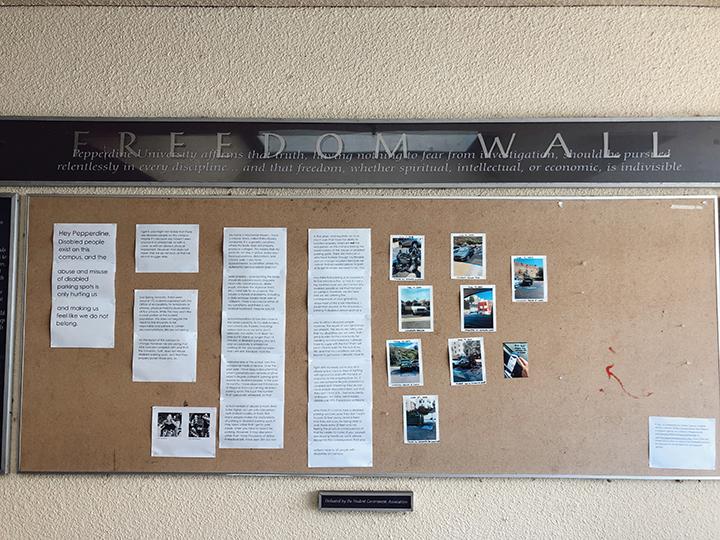 Senior Mackenzie Mazen shared her experience as a student with diasabilities on the Freedom Wall in October 2019. Mazen and other students continue to fight for a more accessible campus. Photo courtesy of Mackenzie Mazen

What began as a simple post on the Freedom Wall became an intense conversation between the university and one student’s open frustration with inaccessibility on campus.

Senior Mackenzie Mazen first raised awareness with a post on the Freedom Wall in October about the issue of maintenance vehicles repeatedly parking in handicap spots.

“I’ve somehow become the patron saint for disabled people on campus,” Mazen said. “Which is a very big responsibility and somewhat terrifying, but also, I’ll do it if no one else can.”

Mazen has Ehlers-Danlos syndrome, which can make walking long distances difficult because her joints can dislocate easily due to a lack of collagen production, making accessible parking essential.

Parking is only one issue among many that Mazen and other students with disabilities face on a daily basis, including broken handicap door buttons, elevated door frames that make it difficult for those who use wheelchairs to get through and inaccessible elevators.

DPS responded to Mazen’s freedom wall post in October by conducting a meeting with her to discuss her comments. Since then, Mazen said the issue of Pepperdine vehicles parking in handicap spots has ceased.

Mazen said she received an invitation to attend Diversity Dinners with President Jim Gash and members of Black Student Association to discuss ways to improve inclusivity and accessibility on campus.

“I think my biggest gripe with it, and I voiced this at the last dinner, is that everyone in the room is a leader on campus or a change maker on campus and it’s kind of just an echo chamber,” Mazen said. “Administration just kind of sits there and listens but I don’t know if they’re necessarily realizing the implications of what we’re saying.”

Mazen said the administration’s inaction has left her and others with disabilities feeling as if they have to constantly advocate for themselves.

“I don’t think the university is trying to intentionally harm people with disabilities,” Mazen said. “But it’s not necessarily about your intentions — it’s about how they are received — and as a person with a disability, I have not felt very well-received by the university.”

Students with disabilities also face more challenges than just accessibility to campus facilities. Amanda Cooper, a junior who has sensory neural hearing loss in both ears, said sometimes there is a gap between her official accommodations and her professors remembering to implement them.

“Even though I have an accommodation for captions in every video, professors don’t often remember that,” Cooper said. “Being someone who’s hard of hearing, the question is often, ‘Am I willing to disrupt the class to advocate for my own needs or should I sit back in silence and accommodate myself later?'”

While faculty can forget her accommodations, Cooper said students sometimes forget that having a disability is not her only personality trait.

“Once I tell people that I am hard of hearing, a lot of times, they’re surprised,” Cooper said. “Which can go either way for me, because on one hand, it means that I’ve been doing my job well of trying to just not let it bother my day to day life; but on the other hand, people being surprised kind of shows me how few people are aware of the intersection between disability and normal life.”

Cooper said at times when she is not wearing her hearing aids, people might snap or clap at her to get her attention.

“That can feel kind of derogatory, because you can always just address me like a normal person,” Cooper said.

Despite these interactions with some, Cooper said many people she interacts with are more curious about her condition than judgmental.

“Just genuine curiosity is one of the best things for people [with disabilities], where they don’t feel judged, but they feel like people want to be welcomed into their experience and help them with that as well,” Cooper said.

Mazen said many students have rallied around her to support the changes she and others hope to see. She said she hopes she receives the same support from administration.

“I don’t want this to be a fight where it’s just us screaming into a void and no one is listening,” Mazen said. “I want administration to understand it and to see that so many of the things that I bring up are very tangible and very easily fixable.”

Sandra Harrison, executive director for the Office of Student Accessibility, said the OSA strongly supports construction for automatic doors at the entrances to the Thornton Administration Center and Student Assistance Center, shade coverings and benches for all shuttle stops, wheelchair access for shuttles, kitchenettes in first-year halls and enlarging the WavesCafe to provide more options for dietary restrictions.

“More broadly, we’d love to see that all programs and classrooms ensure a sense of belonging for people with disabilities,” Harrison wrote in an email. “Each student with a disability faces unique barriers. We as a university are good, I think, at reducing and removing those barriers for an individual.”

Freshman Eden Mair, who, like Mazen, also has Ehlers-Danlos syndrome, said she has received some unsupportive comments from other students and administration questioning the validity of her condition.

“I think there’re [almost] 200 students here who are registered with OSA who have disabilities, and they exist,” Mair said. “I think a lot of people in their daily life forget it, and when they do, their outward reaction can be negative.”

Mair said her biggest hope is to see increased visibility for the disabled community.

With the help of the Volunteer Center and the Office of Student Accessibility, Mazen will spearhead Disabilities Awareness Week beginning March 9. Programming will include activities such as a wheelchair simulation to raise awareness for the importance of accessibility on campus.