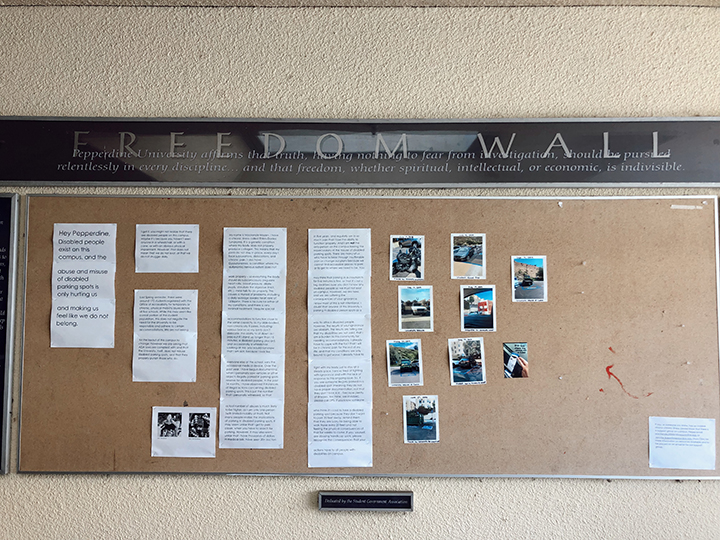 It’s minutes before job training starts and senior Mackenzie Mazen is frantically driving her Ford Escape around Smothers parking lot trying to find an empty spot. Convinced there has to be something left, she engages in the all-too-familiar race to the last available spot. After circling the lot a few times, she settles for a less-than-ideal spot and accepts that she will have to walk. Where many would sigh with relief, Mazen is fraught with anxiety.

She has a broken meniscus because of her Ehlers Danlos syndrome, which makes walking long distances particularly difficult.

“I remember that day, specifically, because I was in a lot of pain,” Mazen said.

Her regular selection of spots, the handful of accessible-parking spaces, were currently full.

“All the other spots were taken,” Mazen said. “There was a maintenance vehicle parked in one of the spots.”

This was the first of many times Mazen noticed vehicles unlawfully parked in accessible parking spots.

“After that, it happened again,” Mazen said. “It’s happened several times since then.” 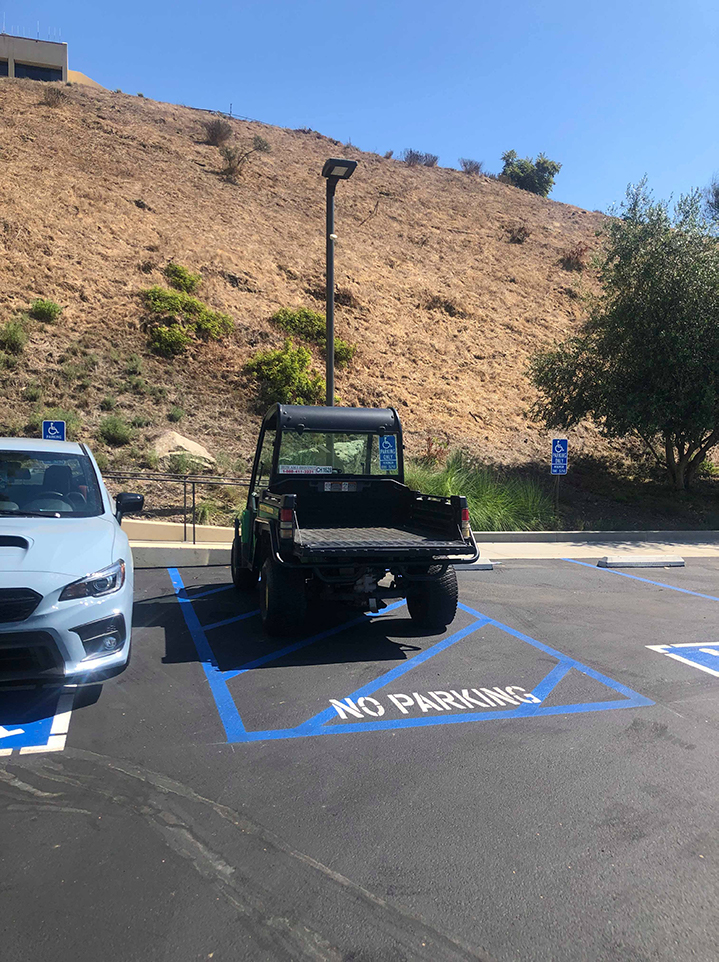 A maintenance vehicle parked in a cross-hatch section that reads “No Parking.”

She said she reached out to DPS on multiple occasions, but the problem continued.

Mazen, who said she was tired of dismissive responses and persistent abuses, took it upon herself to document infractions whenever she saw them. She recently displayed her findings on the Freedom Wall in efforts to raise awareness on the issue after what she felt was a long period of non-action on behalf of the administration. 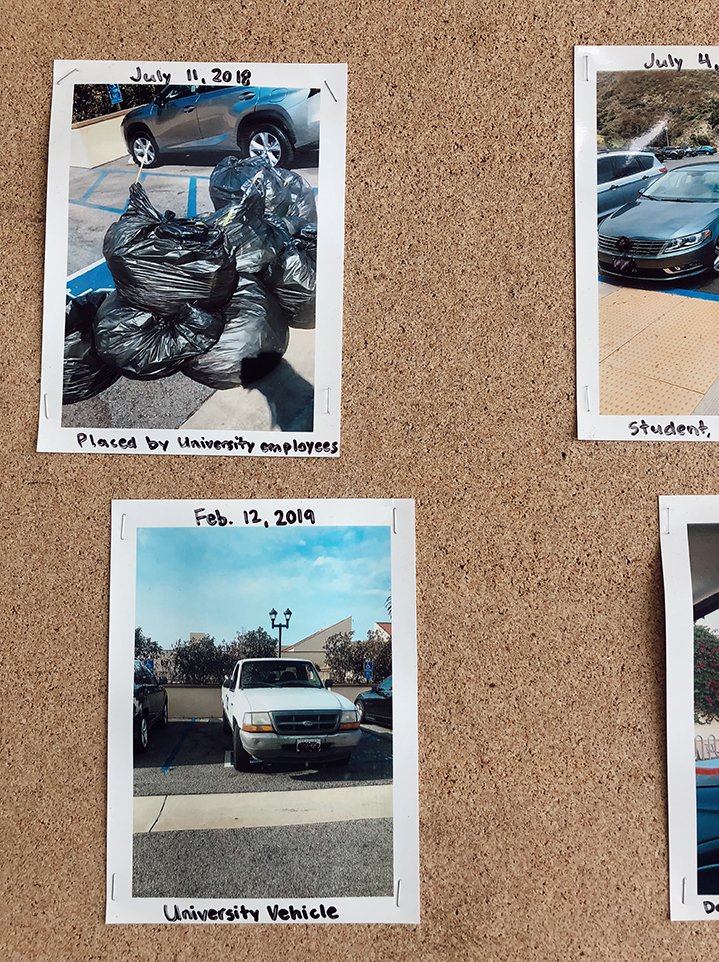 Mazen’s Freedom Wall display includes images of accessible spots being visibly blocked or misused as well as a series of statements voicing her concerns.

“After I put the Freedom Wall up, the head of DPS emailed me that night and asked if I wanted to have a meeting,” Mazen said.

Mazen reported to have witnessed nine offenses over the course of 14 months, six of which did not come from students.

“The university has been the biggest repeat offender,” Mazen said.

Written in large font across three panels of paper on the Freedom Wall read, “Hey Pepperdine, disabled people exist on campus, and the abuse and misuse of disabled parking spots is only hurting us and making us feel like we do not belong.”

In this sentiment, she is not alone.

Tomas Martinez, professor of psychology, said the campus is currently filled with barriers and limitations that effectively keep people from coming here.

“If we want disabled people on this campus, we have to be open to accommodating them,” Martinez said. “We seem to be discriminating against people with disabilities.”

Martinez, who contracted polio nine months after birth, has always had to pay close attention to accommodations wherever he goes. He said he has witnessed many things change since the start of his career at Pepperdine in 1979, but he finds improvements in accommodations have been very slight.

Sitting in his office, wheelchair by his desk, he said accessible parking remains the biggest issue.

“Three years ago, I actually fell and broke my neck,” Martinez said. “I got spinal cord surgery, and I had difficulty walking, so I started using a wheelchair around here. Handicap parking has become a battle for access. There are more handicapped people than there are handicap spaces.”

The problem only seems to be getting worse.

“I don’t know if it’s happening more frequently or if I just notice it more frequently because my health is deteriorating,” Mazen said. “I’m depending on these spots more and more.”

Like Mazen, students with disabilities have come to genuinely depend on what few blue parking spots exist on site. The seemingly innocent action of parking in a blue spot – as someone without a disability – has threatened other’s abilities to go about their daily lives. 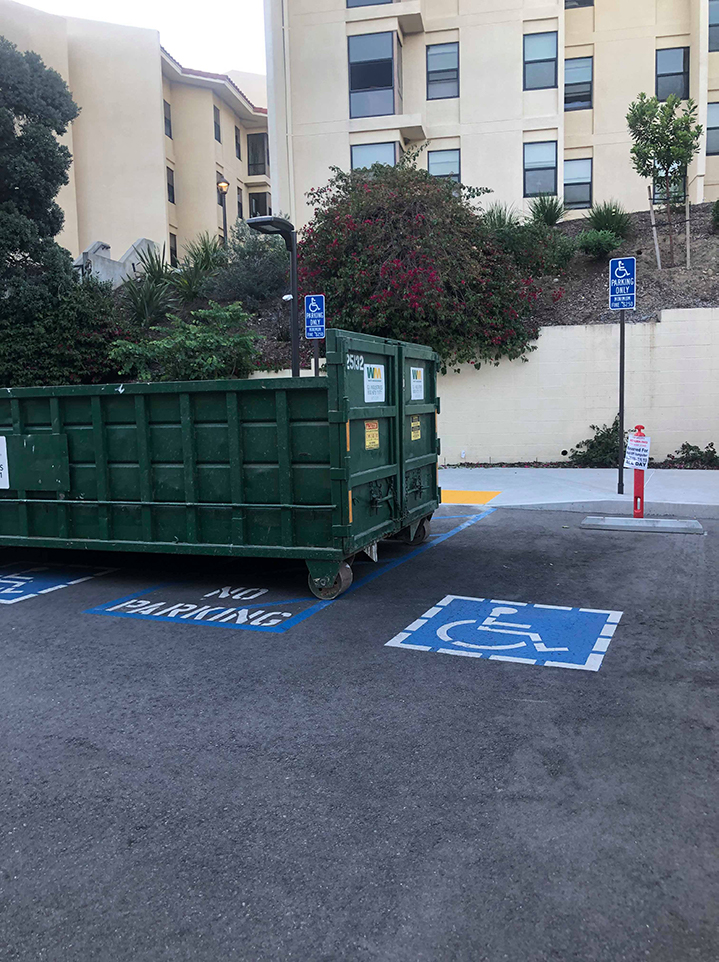 The problem persists, Mazen argued, because of the lack of real consequences to said behaviors. Offenses that should result in a $250 fine — the minimum penalty as per California state law — instead result in a $40 ticket.

It also continues, she said, because many ignore the sheer size of the community of people with disabilities on campus.

“There’s 170 students [with disabilities],” Mazen said. “Each one of those students is a human being with a family, with friends and with medical issues and needs.”

Mazen said her main goal is to raise awareness among the student body and administrative bodies, in hopes that some sort of institutional change will follow.

“There are disabled people on campus and a lot of [their] illnesses can be fluid,” Mazen said. “If you don’t see it, it doesn’t mean it’s not there. Everyone knows how hard college is, but no one thinks about how hard college is when you’re sick.”

By speaking up, Mazen said she seeks to help people understand that not all disabilities look the same. She strives to change the fact that the word “disabled” inherently conjures up images of wheelchairs. Not all physical disabilities require the daily use of a wheelchair.

Until a recent meeting with DPS representatives, Mazen said she considered administrative bodies to have been “quite dismissive.” Both Mazen and Martinez repeatedly mentioned that there is a latent need for putting words into action. 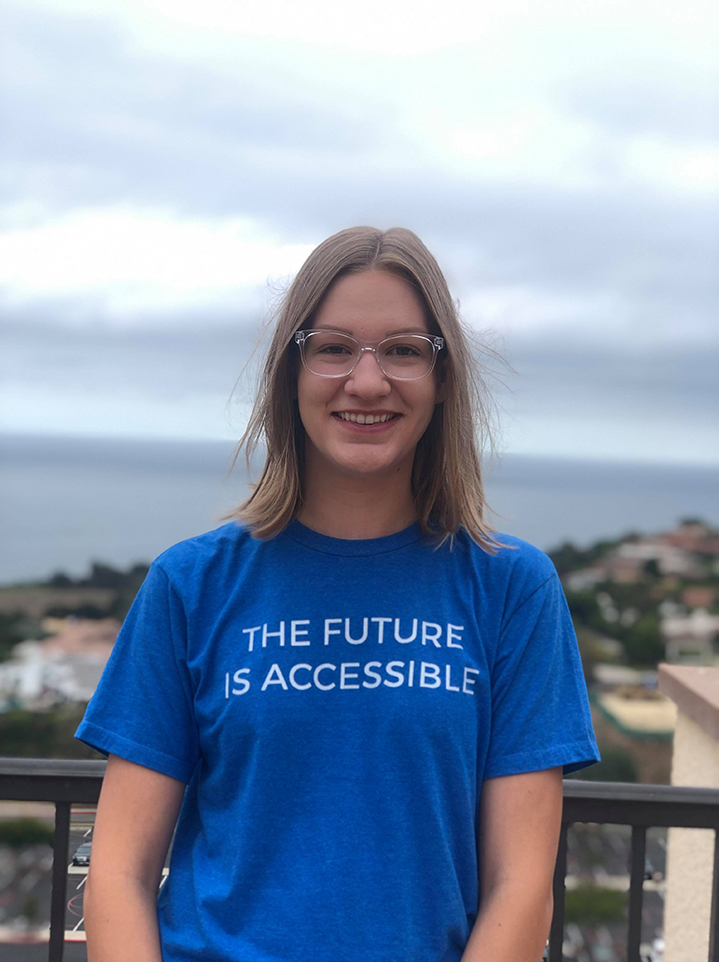 Mackenzie Mazen poses at Pepperdine with a shirt that reads, “The future is accessible.”

Mazen’s efforts to voice her concerns to the administration began before she went abroad as a sophomore. She said she reached out to Michael Feltner, dean of Seaver College, in the spring of 2017 by sending him a video filmed on a GoPro. The video documented her movements around campus when she had to use a knee scooter to aid her mobility.

“He responded, and I replied [to his email] and sent him ideas that I had and he said he was going to share my message with his peers in construction and facilities,” Mazen said. “There was no follow-up from that until spring 2018.”

Feltner declined to be interviewed for the piece but provided the following statement:

“Seaver College is fully and broadly supportive of the Office of Student Accessibility and does everything possible to support the success of all students. For students with a disability, this means that we comply fully with all applicable legal and regulatory requirements. Further, we do our very best to be both proactive and responsive to student needs.”

Mazen and Martinez both mentioned that they feel that the university is doing the bare minimum. Mazen said push buttons for doors are constantly malfunctioning, that accessibility services are in need of maintenance and that some ADA-compliant infrastructure is not fit for use in practice.

Both Mazen and Martinez also mentioned how some ramps are too steep to go down on wheeled devices – such as chairs or knee scooters – and how going up most of them is impractical and abnormally strenuous.

Mazen said her Freedom Wall post managed to grab the attention of bodies that she had previously deemed relatively unresponsive.

“It’s my last year of undergrad here,” Mazen said. “If I don’t speak up now, who’s to say anyone after me will speak up. I don’t want someone to have to go through this all over again.”

Mazen has since met with Dawn Emrich, head of the Department of Public Safety (DPS), Eric Barnes, captain of Public Safety, and Sandra Harrison, executive director of the Office of Student Accessibility (OSA) to discuss the issue.

Harrison, who described herself as a longtime “ally and advocate for people who are marginalized,” said she has found “Pepperdine staff to be responsive to student need.” She does, however, see room for improvement pertaining to staff training.

“Like most of the world, people assume that others are abled,” Harrison said. “We need to find more ways to educate the community to the disabilities represented among us, including staff, faculty and students.”

Both Mazen and Harrison said they have found DPS to be “engaged, concerned, and responsive” as they proposed sustainable solutions for what may have at one point seemed like an ineradicable problem.

Mazen said potential solutions proposed by officials included taking offenses to the disciplinary board where students could lose parking privileges on campus for violations and holding a disabilities awareness week.

“Ms. Mazen’s post on the Freedom Wall raised awareness throughout our community to the importance of accessible spaces being available at all times,” Emrich wrote in an email. “Public safety officers routinely conduct parking and traffic enforcement throughout campus for campus violations, such as an expired campus permit, and those included in the California Vehicle Code, such as parking next to a red curb or in an accessible space without a placard.”

Although Emrich did not comment on specific solutions to current problems, Mazen’s remarks suggest the issue is on the road to recovery.

“I believe the Freedom Wall really pushed people into caring,” Mazen said. “Hopefully these changes will be implemented university-wide.”

For now, her request is simple.

“I just want people to care,” Mazen said. “If not for me, then for other disabled people.”