The sun sets Feb. 11 on Pepperdine’s Caruso School of Law, home to the Straus Institute for Dispute Resolution. The Institute has created a variety of training sessions that teach lessons such as women’s negotiation, LAPD conflict resolution and advocacy in a special education setting. Photo by Samantha Torre

Among Pepperdine University’s many institutional changes in 2022, is the Straus Institute’s — a branch of the Caruso School of Law — association with Special Education Local Plan Area Training. This is one of the specialized curricula the Straus Institute offers — in addition to Women’s Negotiation and LAPD Conflict Resolution Trainings.

Over the past seven years, the programs within Straus have received grants for their work. The Institute’s most recent addition, SELPA, began in Dec. 2021, joining diverse programming focused on mitigating conflict in day-to-day life.

“I think what our students can learn from a partnership like this is that change is possible. That change is not only possible it is appreciated by all sides,” said Sukhsimranjit Singh, Judge Danny Weinstein managing director for the Straus Institute, LLM program director and associate professor of law and practice at Caruso.

The program began when Stephanie Blondell, associate professor of law and practice and associate director of the Straus Institute for Dispute Resolution, joined Straus in 2012. Blondell said she worked for public sector mediation programs in Seattle for 15 years before working at Pepperdine.

“These are their own officers saying that this organization is not treating them very well, and that ‘I should have been promoted,’ ‘I shouldn’t have been harassed,'” Robinson said. “And so they got frustrated with the organization and were bringing losses left and right.”

When the program began in 2015, Blondell said the LAPD spent $50 million over five years settling cop-on-cop disputes — more than it spent on settling disputes with county residents.

Blondell said with the LAPD’s identity as a majority-minority workforce, it is important to tailor the training to the culture of each unique police force.

To start, Robinson said Straus looked at officers in mid-level management who performed role-call. A majority of the times officers sued one another, it was not the first incident that occurred. Rather, there would be repeated incidents of officers utilizing name-calling and discrimination during role-call — as a way for the commander to maintain authority — that that higher-ups would not address.

“Let’s try and attend to that first incident better, and let’s make sure that our leaders feel equipped, because in a true hierarchical fashion, when someone did something wrong, historically, you write them up or in a disciplinary way,” Robinson said.

From there, Robison said, training worked its way up to the commanders, including them in conflict resolution training.

Singh said since the program’s inception, the Institute has trained more than 800 officers — from patrol officers to commanders — in conflict resolution.

“We have really tried our best to work with the police culture but also motivate them to understand what is a dispute resolution culture and an understanding culture,” Singh said.

Singh said he brought a cross-cultural element to the training when he joined in 2016.

“Understanding how culture impacts peace, race and bias,” Singh said. “How racism and bias can infiltrate into any of our minds, not just a particular person or organizations mind and then, lately what I’m trying to build for them is a piece of mediation. How does mediation as a skill set help people build across cultures and connections?”

To measure the effectiveness of the cultural trainings, Singh said the institute distributes surveys and interviews attendees. The community has thus far provided a positive response, he said.

“For a university to improve the quality of life of its community is an important aspect as compared to just the ivory tower we are accused of, but here we are in the street working on real-world problems,” Robinson said.

In 2017, Blondell said she received a grant from Open Society for the conflict resolution training alongside Robinson and the Los Angeles Women’s Police Officer Association. The implementation of the grant faced delays temporarily due to COVID-19 issues, and Blondell said her and her team are finding ways to rework it to fit today’s context after the Black Lives Matter movements in June 2020.

The Jams Institute awarded Straus a $450,000 grant in July. This most recent grant is different because it focuses more on the relationship between law enforcement and community members, Singh said.

“The grant does magic on both ends, not on one end,” Singh said. “We are focusing on how to build partnerships within communities and bring community leaders to all the trainings where law enforcement and community members will join hands to work collaboratively on learning from each other.”

The Straus Institute finds community members through connections with law enforcement who work with members of the local community, Singh said.

Singh said the community can learn valuable lessons about connection with each other and across others through these training sessions.

“At Pepperdine, I can learn something from these exercises with law enforcement that we can apply to our community internally to build trust between the different constituents that we serve, both in terms of students from different backgrounds to faculty from different ideological backgrounds to staff that has been suffering deeply because of COVID,” Singh said. 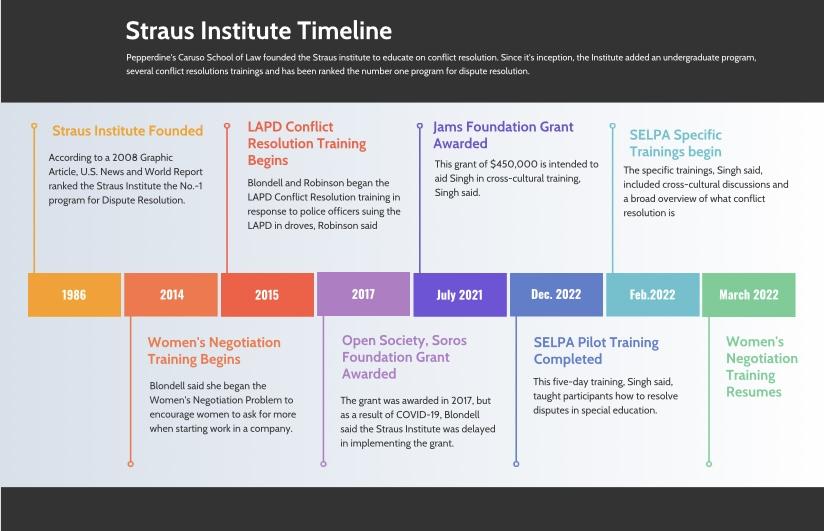 A timeline of the formation of the Straus Institute and its dispute resolution workshops. The Institute began in 1986, and in 2022 has created three workshops for the community outside Pepperdine. Graphic by Samantha Torre

The Women’s Negotiation Program began seven years ago when Blondell said she became aware of discrepancies in the hiring process between men and women. In the trainings, Blondell said she worked alongside her colleague, Professor Denise Madigan, to create a curriculum that looked at negotiation through the lens of gender.

“It hurt my heart to see women not applying for jobs because they didn’t think they had the minimum qualifications,” Blondell said. “When they did [apply] or when they received offers, they would often accept the offer without the benefit of negotiation and that was not typically something that most of my male students did.”

Research shows men will usually negotiate for themselves, whereas women will more often negotiate for others as advocates, Blondell said.

“There’s some legitimate criticism of that research, however, the result is the same, women make less on the dollar when they negotiate for a deal,” Blondell said. “Even when they do ask, they receive less than men do.”

The curriculum, Blondell said, helps women see negotiations as a rapport builder, and teaches them that if the company is unwilling to negotiate, they can always leave the discussion.

“It is just a joy to work with folks who work in special education, they’re very empathetic, very kind people,” Singh said. “It was just a joy to be with them for five days.”

In the cross-cultural training, Singh said participants looked into what culture is, what special education culture is, how culture and identity interconnect and what organizational culture is.

“People grew closer because it’s a training that can only be successful if people share stories, if people are open about their lives, if they’re vulnerable,” Singh said. “And I think we were successful in creating that environment where people did open up.”

“There’s so much conflict within us and outside of us, that this field is a blessing to be able to teach us how to not just eradicate or resolve the conflict, but at times just how to understand what is conflict,” Singh said.

As training sessions progress, Singh said he sees them as both a challenge for people and a representation of a hope for change.

“For both trainings I have met men and women who are just amazing in law enforcement and special education,” Singh said. “We can be proud to work with them. We are just doing our service. And I feel blessed to be part of this program, to be part of these trainings. We can actually bring change on the ground in a beautiful, meaningful way.”