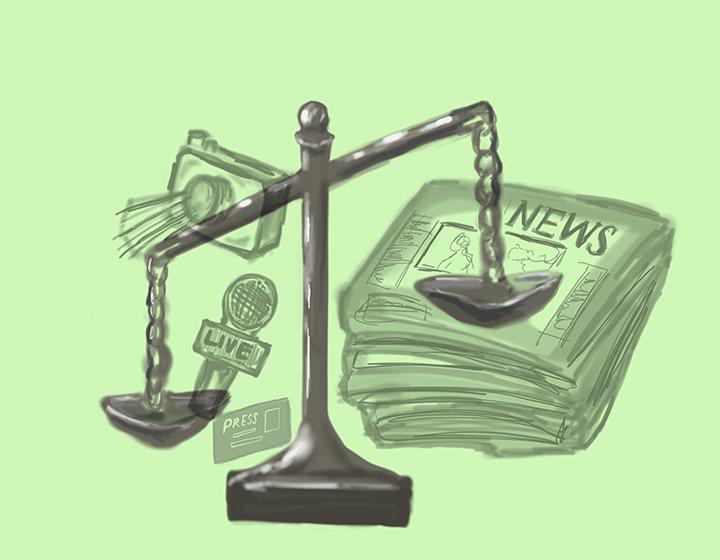 The media coverage in the aftermath of last week’s helicopter crash in Calabasas serves as yet another reminder of the importance of knowing whom to trust and how to sift through misinformation during a major breaking news event.

Shortly after news of the crash broke, gossip and celebrity news site TMZ was first to report that Kobe Bryant was among those who died in the crash. TMZ posted their story about Bryant’s death at 11:24 PST a.m. Jan. 26, a little more than an hour after police received reports of a downed aircraft, according to CNN.

The report was so early that TMZ published its story before the victims’ immediate families had even been informed, according to Los Angeles law enforcement officials. Los Angeles County Sheriff Alex Villanueva criticized TMZ at a press conference held the afternoon of the crash, stating “it would be extremely disrespectful to understand that your loved one … perished and you learn about it from TMZ.” Los Angeles County Undersheriff Tim Murakami tweeted that he was just gathering facts about the crash “as a media outlet reported the Kobe had passed.”

As tragic breaking news events develop, journalists face the dilemma of how to prioritize reporting quickly while also being respectful toward victims and their loved ones. Despite the pressure newsrooms may face fulfilling the public’s demand for real-time information, being sensitive during times of tragedy always outweighs being first.

Although TMZ did not report Bryant’s death in the crash inaccurately, they prioritized breaking the news first and did not consider what it could be like for family members to learn through social media that their loved one passed away.

Bryant’s prominence as a beloved public figure may have spurred TMZ to break the story for the interest of the general public, but nonetheless, this incident brings up a necessary conversation surrounding journalistic ethics.

One of the pillars of the Society of Professional Journalists’ Code of Ethics is that journalists should strive to minimize harm. Under this principle, the code states journalists need to “balance the public’s need for information against potential harm or discomfort.”

This is a guideline that news outlets should and need to remember when big stories break and fast-paced reporting becomes a competition fueled by digital media.

Pepperdine Graphic Media always strives to pursue accurate and ethical journalism. We hold the belief that it is not always important to be the first to break the news, but more important to be accurate and transparent with our audience about how we confirm the information we are reporting.

We did not report that Bryant was killed until we saw a tweet from the city of Calabasas stating city officials had learned he was a passenger on the helicopter that went down.

Outlets that exercised caution surrounding breaking the news of Bryant’s death include the Los Angeles Times, who tweeted “we are aware of reports about Kobe Bryant and are currently investigating” when the information first hit social media. NBC News tweeted something similar, writing: “We are working to determine and confirm who was on board the helicopter.”

This level of transparency is crucial during breaking news situations. When news outlets are clear with their audiences regarding what information they are working to confirm, it helps news consumers know details are still developing.

As social media lit up over the news of the crash, misinformation spread with the false report that Rick Fox, a former Laker with Bryant, was also aboard the helicopter. According to the New York Times, this rumor did not circulate from any news report but rather spread on its own on social media.

It is important for news consumers to look for credible sources and be aware of where news is coming from. While social media is a great tool when it comes to breaking news and gathering details quickly, it can also spread inaccurate information.

During times of breaking news, posts from law enforcement accounts provide the most official and confirmed pieces of information. Some important accounts to follow for updates near campus include:

Sign up for alerts online from the cities of Malibu and Calabasas for safety advisories and emergency information. Various law enforcement, fire and government agencies also provide emergency notices and alerts through Nixle.

Local Malibu and Calabasas news sources can also be a good resource to know what is taking place in our local communities. Some organizations to look out for include:

When looking at information from news outlets on social media, look for posts that cite law enforcement officials as sources.

News outlets that post that information is “alleged” or “reported” have not officially confirmed the details they are publicizing.

While it is understandable that reporting on breaking news can be chaotic, journalists have a responsibility to prioritize reporting ethically rather than quickly. On the other hand, having news literacy and knowledge regarding what information to trust and what to dismiss is necessary for the general public to avoid spreading misinformation and rumors.