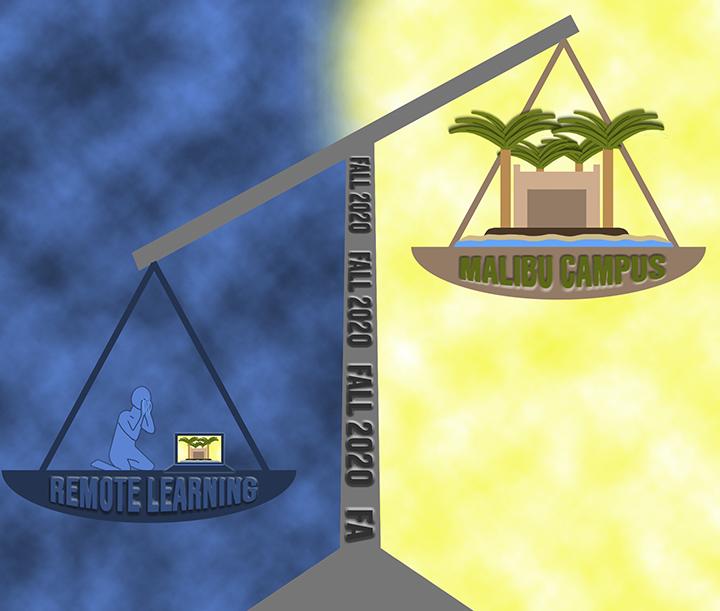 Seaver students are scrambling to figure out their futures, following President Jim Gash’s July 22 announcement regarding remote instruction for the fall 2020 semester. The move to remote learning comes after California Gov. Gavin Newsom announced restrictions preventing K–12 schools from having in-person classes in counties most affected by the COVID-19 pandemic.

The countdown to sort out class schedules, housing, travel plans and extracurriculars began a mere 27 days before classes are set to start Aug. 17. In Gash’s statement, he wrote the University has been “preparing aggressively to provide a robust and excellent online educational experience.”

Seaver students received an email from Seaver College Dean Michael Feltner an hour and a half after Gash’s announcement, detailing the upcoming semester’s functions and the priorities of the college.

With the thought of hybrid classes already looming over students, the value of a fully remote semester is a concern among many.

Despite the campus being closed, the University will offer the same resources for academic support — such as Payson Library, the Student Success Center and OneStop — through a virtual format.

According to Feltner’s email, the price of tuition remains the same — regardless of the move to online and the financial hardships among students and their families — totaling $28,875 plus a $63 Campus Life fee.

“The value of a Pepperdine University education, regardless of its mode of delivery, far exceeds the price of tuition,” Feltner wrote.

Without in-person classes, Abraham Kakish, junior Business and Spanish double major, plans to defer to avoid spending a quarter of his college experience behind a screen.

“When teachers do an extra initiative to kind of make the classroom more interesting and make the classroom more direct and face-to-face, rather than just them presenting […] is really important to me,” Kakish said. “I’m having a hard time wrapping my mind around $20,000. [Feltner’s statement] was the funniest thing I read all day, and I think it was bold.”

Others said it was emotionally detrimental to students when the University changed its plans within a two-week period and did not decrease the tuition price.

About 50% of 66 students surveyed by the Graphic on July 9 said they believe the University is prioritizing finances over students.

“They just come off as money hungry and money ambitious,” sophomore Justus Johnson, English and Philosophy double major, said. “They’re trying to keep our school afloat, I assume, but it’s just really been neglecting of the emotions and circumstances of the students they claim to have been putting into consideration.”

Keoseyan, who plays saxophone on a music scholarship, originally planned to drop the semester to avoid the high tuition but rethought his decision after finding out he would not automatically get his scholarships back. These issues led him to remain a full-time student to graduate in four years. Some of his classes, he said, may be a struggle to effectively shift to online learning.

“I’m expecting the lab to be a problem for [my animal biology class] and then also organic chemistry,” Keoseyan said. “I have no idea what they have planned for that.”

Summer online instruction did not meet senior Business Administration major Lilly Rumford’s expectations, as the class was not “up to par” with Pepperdine’s standards and did not provide the “small class sizes and close interpersonal relationships” she sought.

“That’s something I really wanted to avoid this semester — feeling like I’m not only isolated from my friends, from the social life that I built at Pepperdine, but I’m also having to teach myself everything and figure everything out on my own without the help of any professors,” Rumford said.

Since the University plans to begin the spring semester in February, it is arranging to offer an intensive January session at $250 per credit hour, up to four hours, for those students enrolling in flat-rate tuition for the fall.

Feltner’s email also announced the suspension of the final International Program, Washington, D.C., for the fall semester but wrote the University is “committed to ensuring the continued progress toward degree completion for all students whose international program has been suspended.”

“I’m disappointed,” Johnson said, as he had planned to study in Washington, D.C., in the fall. “I will say that is the biggest disappointment to come from all of this because just look outside, look on social media, at the current climate of our country — and this is a special season, as it’s election season. Pepperdine can do all that they can to, quote unquote, try to make it up to us, but when you think about everything else in the world that would come from that experience, you can’t do it.”

The lineup of emailed information put some students in a bind, as the University announced a few weeks prior that juniors and seniors should start looking for off-campus housing to accommodate the incoming sophomores whose international programs were canceled. The students who opted to stay on campus soon had their housing contracts annulled since the college cannot house a full campus of students with current COVID-19 restrictions.

Junior International Business major Heather Chaffin said she and her friends put a deposit down for a Malibu apartment, as per Pepperdine’s email instructions, but found out less than a day after that their classes would be fully online.

As of July 9, 36.4% of 66 students surveyed by the Graphic would stay in the Malibu area if the University were to go fully online.

The rushed announcements from the University had many students scratching their heads for how to process the new information presented each week.

“Canceling, telling students one thing last week and then telling us another three weeks before classes start gives us no time to react,” Johnson said. “We’re having to be reactive instead of proactive.”

A quarter of Seaver students will have to wait an extra six months before beginning their traditional college experiences: the incoming first years.

“I was really upset because I’ve been waiting so long to go to California,” Christina Buravtsova, first-year IMC major and Journalism minor from Virginia, said. “For the longest time, I thought that there was the possibility that we were going to be on campus because they had the Restoration Plan and everything, and I was really hopeful that maybe there was a possibility that we could be in Malibu.”

This year, New Student Orientation (NSO) moved to an online format via videos on the Pepperdine app, and new students are still finding ways to connect and educate themselves in what the University has to offer.

“I’ve met so many amazing people,” Buravtsova, who talks to classmates over Instagram, said. “I found my roommate, and I absolutely love her and my suitemates. I think we all really connected.”

On the other hand, athletes are mostly in the dark, as the NCAA, West Coast Conference and Pepperdine Athletics administration do not have answers for the many questions presented.

Mahala Bayless, junior IMC major and 400-meter hurdle runner, planned to reside off campus but opted out of her lease due to the uncertainty from the athletic department. Instead, she may stay with her parents in rural Texas and work if she does not need to be on campus.

“I know [Athletics is] fighting for us to be there,” Bayless said. “We want to be there; we don’t get the same type of training, nutritional guidance, rehabilitation off campus.”

Bayless stated that Athletic Director Steve Potts emailed the athletes an explanation for housing exemptions to live on campus.

“If they’re still not promising us that we’re going to be able to train or even interact with our coaches or any of the staff, the weight room and things like that, then it doesn’t make sense to me why they are pushing [on-campus housing] on us,” Bayless said. “[Having] the Athletic department still be so uncertain about what we’re doing — it’s very, very frustrating and stressful.”

Along with the fall athletes, the cheer team’s season is also up in the air since they only cheer during the basketball season, which starts in the fall and concludes in March.

Rumford, who is a cheerleader, is unsure if there will be a cheer team this year since it is unknown if the NCAA will be having basketball games.

The Student Programming Board, which held activities online throughout the summer, is coming back for fall and would appreciate feedback from students, Chaffin stated.

Despite the variability and flexibility of the upcoming semester, students have managed to keep an optimistic outlook on what is to come for fall.

“I think that’s the hardest part — understanding that this year is a lot different,” Buravtsova said. “It’s just a completely new experience for everyone, and we really don’t know how to deal with this because it’s the first time something like this has ever happened.”