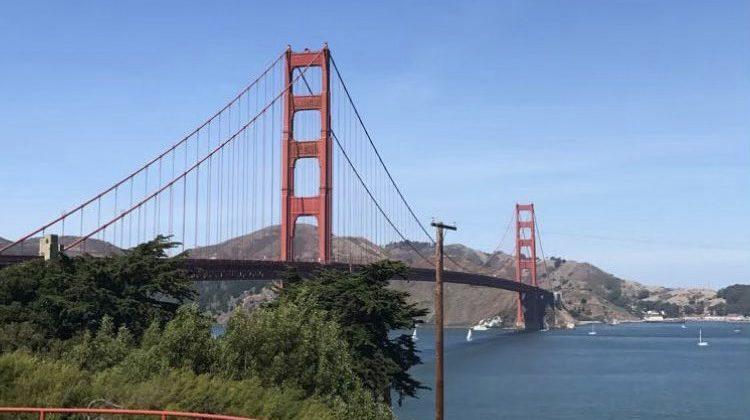 The Golden Gate Bridge is on the list of attracts students visit on the annual trip to San Francisco. The trip was postponed and then rescheduled for late March. Photo by Liza Esquibias.

Intercultural Affairs postponed the annual San Francisco trip in response to a surge of COVID-19 cases. The trip was rescheduled for March 18, wrote Rebecca Campos, director of Intercultural Affairs, in an email sent to all academic sophomores and juniors.

Originally, ICA planned the annual Year 2 trip to San Francisco for Jan. 14-16, and invited students to learn about social justice movements in the city, wrote Campos.

The trip typically provides an experience for sophomores who aren’t in an International Program to explore a new place, Psychology Professor Steve Rouse said. Rouse will attend the trip as an advisor for the group of students in the LGBTQ+ movement.

“This also gives students an opportunity to be involved in a formative life-changing educational experience to go to an amazing city and have that kind of travel experience that has an educational component to it,” Rouse said.

“The way the weekend is set up is that students all are together for some experiences, but for certain experiences, they go just to a little sub-trip that is focused just on the social justice movement that they specifically applied for,” Rouse said.

Sophomore Sabrina Musharbash joined the Asian American and Integration Movement, and signed up to go on the trip as she said it held cultural significance.

Along with the educational aspect of the trip, Musharbash said she looks forward to the recreational activities. Her faculty advisor, Great Books Professor Tuan Hoang, said the group will go to a fortune cookie factory, Musharbash said.

“Like I was not planning for that, but then it sounded so fun once he brought it up,” Musharbash said.

Junior Samantha Ortega said she looks forward to meeting new people on the trip in addition to educational opportunities.

“It’s hard for me to bond when suddenly moving to a new school and especially since I am older, so I thought it was a great bonding experience,” Ortega said. “Education wise, obviously I’m not Asian, but I would love to learn more about the Asian American movement and the struggles that that community has faced in the past and see what they’re doing now.”

Students said the trip’s postponement garnered disappointment and further frustration amidst the pandemic.

“It’s understandable since the COVID cases are increasing, but obviously it was saddening since I was really excited about the trip,” Ortega said.

The trip’s rescheduling brought relief to students like Devin Cooke, who signed up for the trip’s Green Power movement.

Cooke said he was excited to see that the trip was rescheduled for March.

“We’re actually progressing even though we had a hectic time period that made us postpone the trip,” Cooke said. “We can see some progress moving forward, that will be alright. And we’ll be able to do some things like Coronavirus or not.”

Cooke also felt relieved and appreciative of staff for rescheduling the trip, he said.

“I think the staff and the faculty were able to put it on and persevere through the uncertainty of whether we have the trip or not, and just power through and help us be able to really explore the trip and explore what it has to offer,” Cooke said.