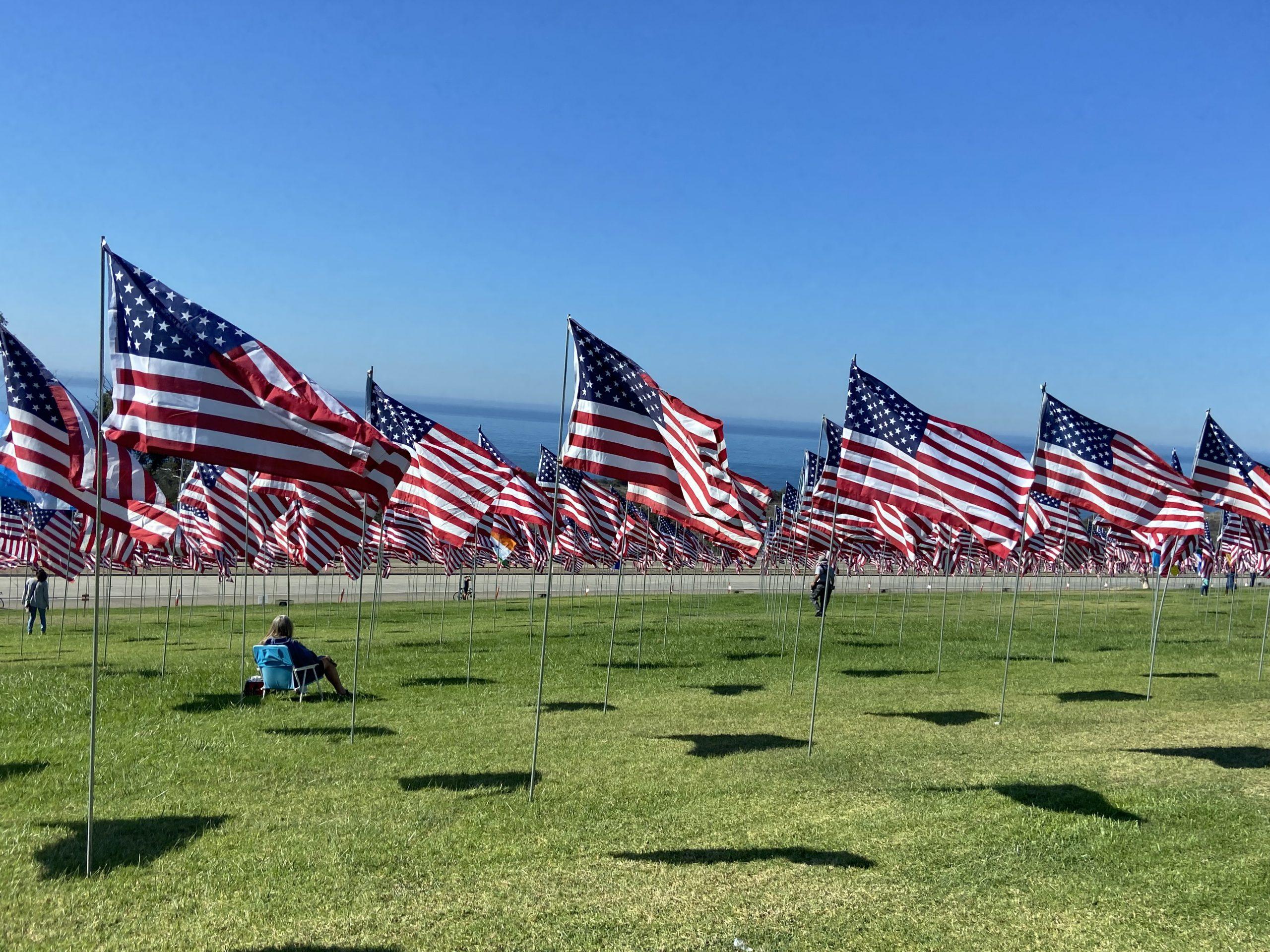 A woman sits and reflects on the tragedies of 9/11 at the annual Waves of Flags display at Pepperdine University. The memorial lasts from Sept. 9 to 25 and honors the victims of the terrorist attacks 20 years ago. Photos by Abby Wilt

The annual Waves of Flags display flew over Alumni Park Sept. 11, and 180 Pepperdine volunteers set up 2,977 flags to honor the lives lost 20 years ago in the terrorist attacks of 9/11.

The display attracts individuals from the Pepperdine community and beyond, as people of all ages come to reflect on and remember the tragedies.

Pepperdine alumni Ryan Sawtelle and Chris Garcia started the Waves of Flags display in 2008, and it has been an annual tradition since.

Sawtelle said he was inspired to start Waves of Flags because his high school did a similar display, but he thought there wouldn’t be a better place to do it than in Malibu on Alumni Park, overlooking the Pacific Ocean. He proposed the idea to Pepperdine President Emeritus Andrew K. Benton, who told him to start raising money and go for it.

“It took us about two months because this is before Pepperdine was promoting it,” Sawtelle said. “We were just sitting there, slamming all this rebar in by ourselves by hand.”

After graduating in 2009, Sawtelle said he continued to watch how the display grew and how it has impacted individuals from Malibu and beyond.

“It’s a larger-than-life memorial,” Sawtelle said. “You can feel the loss of that day, and a lot of people that weren’t alive then can experience it by walking through the flags. It’s powerful.”

Pepperdine volunteers set up the display from Sept. 9 and plan to take them down Sept. 25.

Pepperdine hosted several events on Sept. 11 to reflect on 9/11, starting with a wreath-laying ceremony at Heroes Garden, where Pepperdine veterans and alumni placed four wreaths to honor the four airplanes downed in the attacks.

“You want to never forget what has happened in the past,” Barton said at the service. “We want to give honor and remember what took place that still affects so many people today.”

There was also a “United 93“ film screening held in Elkins Auditorium. The film highlights the events on United Airlines Flight 93, which was hijacked during the 9/11 attacks.

The day of reflection ended with a keynote speech by Gary Sinise, actor, humanitarian and founder of the Gary Sinise Foundation.

Waves of Flags attracts hundreds of visitors every year who stop and walk up to Alumni Park to pay their respects to the victims of 9/11 and reflect on what the observers were doing 20 years ago.

Lauder was in New York City the day of the attacks and decided to come to the Waves of Flags display after she saw the event featured on the news the morning of Sept. 10.

“It’s wonderful to have this place of refuge,” Lauder said. “And to have a place to reflect that isn’t directly looking at the images from 9/11.”

Lauder said the events of 9/11 have stuck with her for years. She still has nightmares about the tragedies and thinks about them anytime she sees an airplane flying a little bit low. She said everyone has been touched by the attacks, even if they weren’t directly affected.

“Just to have a moment to reflect and listen to the flags blowing in the breeze — it’s just a reminder of over 2,000 lives that were lost,” Lauder said. “It just feels like a very fitting memorial that is divorced from any political overtones.”

Lauder’s husband, Bernard Malhame, was working in France the day of the attacks and said he reflected on the shock of the events as he walked through the memorial.

“It’s quite incredible 20 years later to be here, just at this beautiful display,” Malhame said.

Tony and Lynn Terry drove from Simi Valley, Calif., to see the Waves of Flags display and observed the rows of flags to ponder where they were in 2001 and how they told their kids what happened in the attacks.