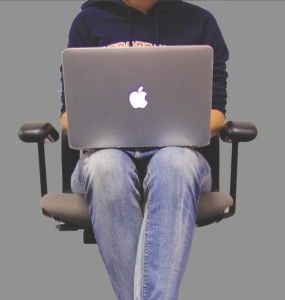 Pepperdine has introduced a new online TV viewing service called Philo that allows students to live stream major broadcast and cable channels on multiple devices, as well as set their DVR to record up to 10 hours of programming. It is also rolling out a redesigned Google Apps platform that will allow the community to streamline their email, documents, sites and calendar.

An effort headed by Associate Dean of Students Brian Dawson and Chief Information Officer Jonathan See, has brought the television-viewing platform Philo to the Malibu campus.

It is now available for students to access online, with an initial lineup of 36 channels. Students can watch live TV on their computers, iPads, Roku and AppleTV.

“Charter Cable Services couldn’t upgrade the systems we have here, asking for more channel lineup and a DVR service. We were looking to improve,” Dawson said.

After student response indicated that watching television “on-the-go” was the most popular option, Dawson said he knew a change had to be done.

“I think it’s a good program,” See said. “Students have the option to select Netflix, Hulu or Philo, depending on their preferences.”

One of the major changes is the ability to record up to 10 hours of television programming online. Content is kept online in the cloud.

The name of the company is based on Philo Farnsworth, the inventor of modern television, because “they feel like they are re-inventing the way people watch television,” Resident Director Andrea Zahler said.

One of the things that makes Philo different, according to their website, is that instead of students having to “plug in a TV set to a coaxial cable in the wall” they can have TV “available wherever and whenever they decide to watch it.”

“I got into it because sometimes the TV room in the lobby is full, there are lots of people trying to watch TV at once. Being able to record is definitely an advantage,” freshman Whitney Williams said.

Dawson agreed. “Almost all students coming here have had a DVR service sometime in their life. You need that when you’re on the go all the time,” he said.

To access Philo, students must visit pepperdine.philo.com and login with school credentials. The full channel lineup is then available for instant streaming. Channels include CBS, NBC, FOX, HGTV and KCAL. Users can then search for live programming, set a DVR recording and access their profile. It also counts with a “Make a wish” feature that enables users to submit programming they would like to see from Philo.

“It’s great of Pepperdine to provide this resource for residents,” senior Kristen Bechtold said. “It makes it easier for me because I don’t necessarily plan on watching TV.”

An extra feature is that students have two available levels of parental control: “17 years or older” and “Under 17 years old.” Students might appreciate this, as it tackles the recent controversy on campus regarding the blockage of “R” rated programs.

Dawson pointed out that HRL was trying to set the parental control to “X” rated content, something applied only to movies, but that DirecTV had set the ratings too low, which is why students were forbidden from watching programs such as “The Walking Dead” and the “Comedy Central Roast of James Franco.”

“That wasn’t our intent at all,” Dawson said. HRL had to go to every single dorm to reprogram all the boxes. If any student still is still having parental control issues, they must contact HRL at 310-506-7586 to have the block removed. All common areas and lobbies have already been updated to restricting only “X” rated material.

“You get a response about how something is broken, and what we tried to say is: ‘It’s broken, we’ll try to fix it, and here’s a solution for you,” Dawson said.

The Philo deal was made over the summertime. Philo came in after DirecTV was installed in May, June and July because the television service provider is the one that supplies the channels into Philo.

Available channels were decided based on price, according to Dawson. “We can tap into many different packages that DirecTV has. They just start going up in price,” he said. As for the cost of the service to the students, Dawson said that setting up Philo came directly out of the HRL fee students regularly pay.

HRL is currently paying to support 500 active users at one time. There is a user fee of $3.02 for each of the 500 users, plus $932 for the service being paid in ten monthly installments. During the summertime, service will be turned off or limited in accordance to usage.

Zahler said there are “just under 550 students who are registered users of Philo,” and they only average “between 15 and 20 active students a day.”

The housing office recently sent out a feedback survey out to freshmen and sophomores. Student reaction has been mixed.

Another technical innovation, Google Apps for Pepperdine has been revamped. “The reintroduction of the Google Apps platform means that Pepperdine faculty, staff and students will be able to collaborate with one another in a more effective way,” See said.

See emphasized that it wasn’t a switch because Google Apps at Pepperdine had been introduced 4 years ago. “We are redesigning the rollout to make sure it is effectively used so anyone with a Pepperdine ID could use it. It’s not a new thing we’re introducing, we redisgned it and eliminated the need to create a Gmail profile to access your email,” See said.

The main reason why Google Apps was reintroduced was to provide “a lot of ease of use,” See said. “It’s very easy to use many of the things Google introduces. They can really help facilitate not only the way that we work together but potentially teaching and learning as well.”

Junior Melissa Ueckert said she agreed. “It’s nice to have that option. I have other Gmail accounts so it’s nice to reconcile them,” she said.

One of the new features that students can now access through their Pepperdine account is Google Drive, a very popular cloud storage service; students will enjoy 30 GB of storage.

While Bechtold believes “it’ll make it streamlined for faculty and students,” not every student has the same level of adaptability to new or revamped services. But sophomore Carlos Larios said the service is “too much technology for” him.

Students and faculty will still keep their pepperdine.edu email account but now have the ability of accessing it directly through Gmail. If the user already has a personal Gmail account, the switch can be made by selecting which profile to access in the top right corner of the browser.

While Pepperdine Gmail accounts are brand new, old emails are still accessible. Those wishing to view them must log onto webmail.pepperdine.edu using school credentials.

See encouraged Pepperdine to discover the new Google Apps. “When we introduced it four years ago we didn’t have any Google Drive storage, it hadn’t been introduced yet, but the need for people to save and backup files is huge,” he said.

With new technology comes burning question about how it will affect students, which in this case relates to Internet speed. Will Philo and Google Apps slow down the Wi-Fi connection?

“When you use bandwidth it could affect our overall network connectivity, which is why we’re testing Philo right now to see the impact of that,” See said. “I hope that we will be within our network capacity today that we can accommodate all these entertainment streaming services together with our day-to-day teaching and operation of Pepperdine.”

Pepperdine counts with one gigabit per second Internet bandwidth. Daily usage normally ranges between 400 and 500 megabits per second. Not to be confused with bytes, bits are smaller units of measurement for digital storage; one gigabyte equals eight gigabits.

See is encouraging users to stream Philo in high-definition so the traffic pattern can be re-analyzed and adjusted to student needs. “If they reach the limit or are capped out we would have to upgrade to 10 gigs, otherwise, people would start seeing slowness in their Internet,” he said.

Art by Amy Fan A few weeks ago, it came to SGA’s attention that the landscaping services’ supply storage room is — for lack...
Copyright 2013 Jupiter Premium Magazine Theme
Back to top