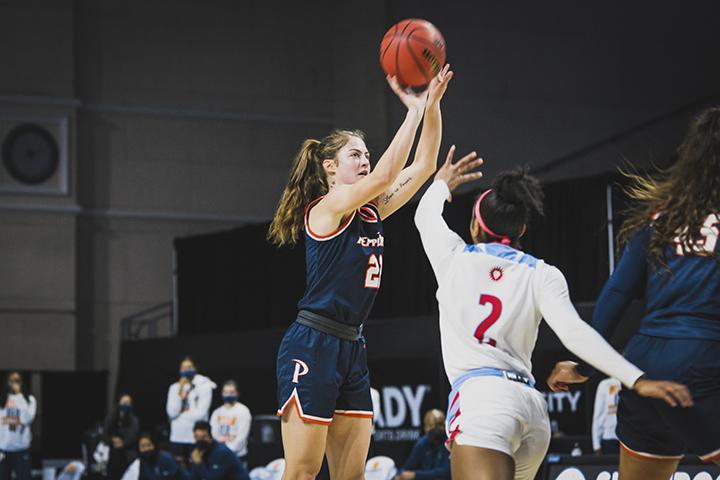 Freshman forward Kendyl Carson takes a shot against Loyola Marymount in the first round of the WCC Championship in Las Vegas, Nev. on March 4. Carson contributed 14 points to Pepperdine’s final score.

The Pepperdine Women’s Basketball team lost to LMU on March 4, in the first round of the West Coast Conference Tournament in Las Vegas by a score of 85-73.

The loss marks the end of the Waves’ season. They finished the season 5-18 with a 2-16 conference record.

“It was a different experience than I have had all year as we entered a bigger stage than we normally play,” freshman forward Kendyl Carson said. “We have not had that big of a stage this year due to COVID-19, so it was a nice experience to have the big cameras and bright lights on us.”

The Waves came into the game with a zone defense. Head Coach Kristen Dowling said she was hoping to limit the Lions ability to drive to the basket and get second chance points.

“We had two goals going into the game defensively, which were to protect the paint, and the other was to not give up offensive rebounds,” Dowling said. “Unfortunately, we got outrebounded and let them score a lot of points in the paint.”

LMU ended up scoring 26 points in the paint and had 11 second chance points.

The Waves leading scorer was junior guard Cheyenne Givens, who scored 17 points, and Carson also had a big game with 14 points. Both players were strong forces in the paint for the Waves throughout the game.

The game started out well for the Waves, as they were in the lead after the first quarter 20-18 and only down by six points after the first half. They also shot 54% from the field before the break.

Nonetheless, the Waves’ mistakes on offense hindered their ability to build momentum and confidence. They committed 14 turnovers in the game, including 8 in the first half, and LMU scored 19 points off of those turnovers.

Unexpectedly, the strength of the Lions offense came from their 3-point shooting.

Both the Waves and Lions struggled from 3-point range throughout the season, as the Waves shot 33% and the Lions shot 32%, but the Lions caught fire from beyond the arc Thursday.

Senior guard Chelsey Gibbons set LMU’s all-time record for 3-pointers in a game, as she made eight in the game. LMU also was electric as a team from beyond the arc, as they shot 50% from the 3-point range, compared to Pepperdine only shooting 28% for the game.

“We tried to adjust from our zone defense after Gibbons hit a few 3-pointers,” Carson said. “There was not much we could do when she got hot, especially when we were trying to pack the paint when everyone else on LMU was driving to the basket.”

The Waves struggled to hit 3-pointers, only making one in the first half, compared to LMU’s five.

Senior forward Monique Andriuolo, who in her press conference said she has played her last game for Pepperdine, said the game changed in the third quarter once LMU gained momentum.

“LMU went on a really big run and I also think that we went away from what coach expects us to do,” Andriuolo said. “But I think as a whole, we tried to fight through the whole thing even though we were down.”

While the Waves’ season came to an end sooner than the team would have liked, there were positive takeaways throughout the game and season that show the Waves will be stronger next year.

Dowling said she was happy with Carson’s performance, as this is her first time playing in the conference tournament.

“I was encouraged by the play of Kendyl Carson, and you see that the future is bright,” Dowling said. “They continued to get better throughout the season and the better they played the better our team played.”

Carson echoed what her coach said about the potential improvement for a young Waves team.

“I think this year was a big growing season for us and we had a lot of freshmen and transfers who became more experienced throughout the season,” Carson said. “I think next season we will have a better understanding of how each of us plays. We can all play basketball well individually, but I think we can begin to create that connection which will be fun.”