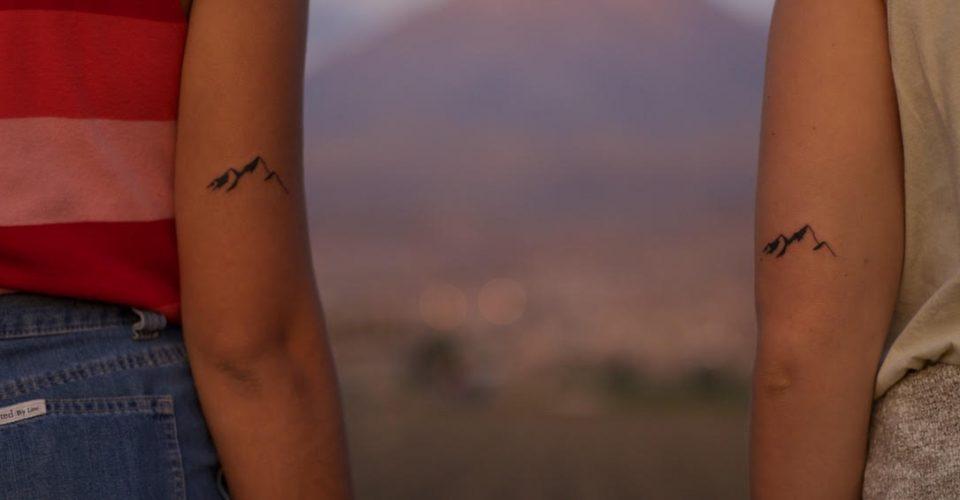 Juniors Hannah Kate Albach and Callie Mechelke look at the view in Peru while showing off their matching mountain tattoos in December 2019. They got them spontaneously while traveling to have a constant reminder of the beautiful sights they saw. Photo courtesy of Hannah Albach

Having a tattoo at Pepperdine doesn’t just mean wearing your heart on your skin. It means sharing your artists, drawings, friendships, travel, faith, family and personal anecdotes. Students who have collected tattoos during their lives said they are beneficial to their personhood. If you know what you feel positive and comfortable about, tattoos have no rule book.

While many hold the attitude that tattoos poorly reflect Christianity, inked Pepperdine students reveal the meaning behind their art and how spiritual relations can be strengthened by permanently accepting who they are and the experiences that defined them.

“Tattoos are a way of defining your look and style to speak to other people about who you are without ever saying a word,” said Pepperdine 2016 alumnus and tattoo artist Suede Silver . “It’s a way to immortalize different seasons of your life and remind you of the things most important.” 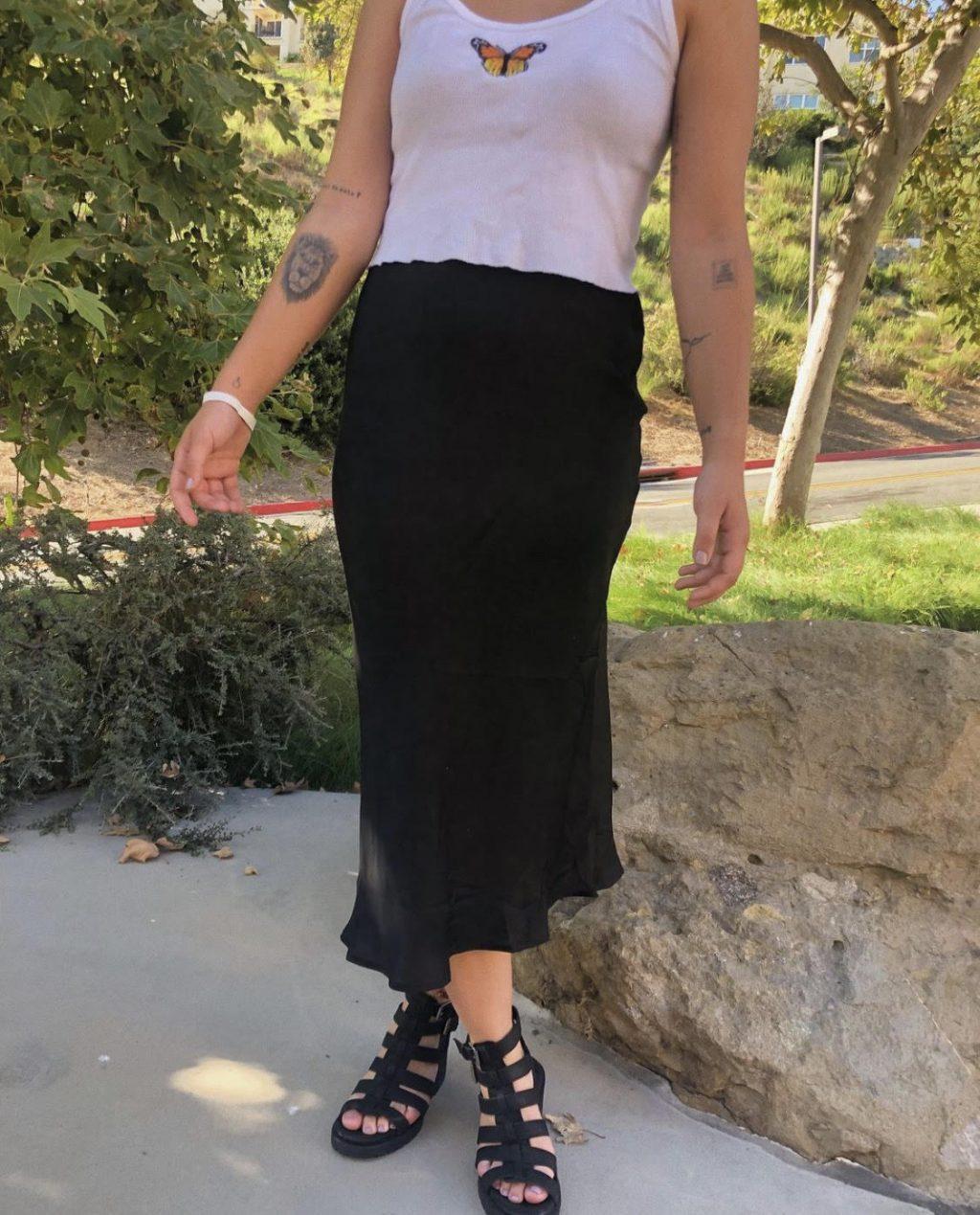 Senior Marissa Moore models her new tattoos in September 2019. She said her favorite tattoo is her lion because it is the most detailed and it represents strength and power. Photo courtesy of Marissa Moore

Junior Hannah Kate Albach has six tattoos and designed most of them herself. She said the first tattoo she drew was a dove on her back, representing the Holy Spirit, and many of her tattoos have spiritual significance. Her dad taught her to draw at a young age and many older sister figures she looked up to as a child had tattoos, resulting in her interest in tattoos.

Other tattoos on Albach’s body include a saying in her mom’s handwriting, a branch that wraps around her ankle and a line above her elbow, which she said she all sketched herself.

Albach said during her freshman year, she was one of the students at Borderline Bar & Grill, in Thousand Oaks, CA, when the mass shooting took place Nov. 7, 2018.

“Obviously, that had some pretty substantial ramifications in my life, and I went through, I would say, a positive transition following,” Albach said. “Overcoming the trauma made me say ‘Oh wow, this is that for me.’ That’s when I got my first tattoo.” 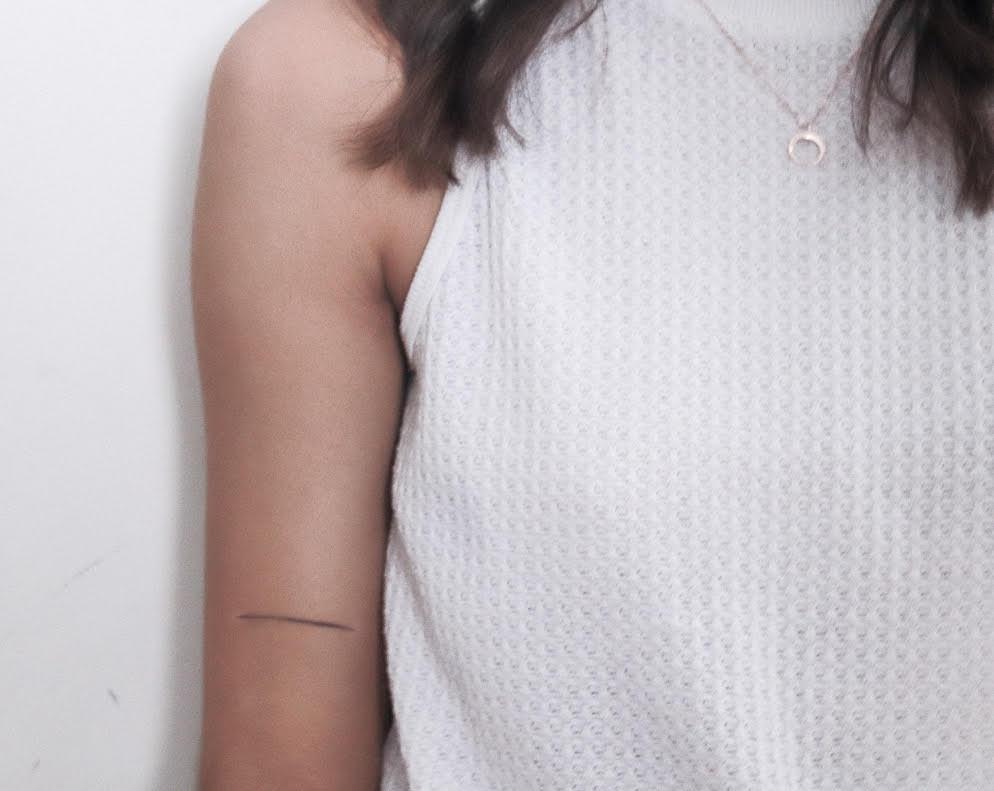 Albach shows off her line tattoo above her elbow. She said it was a play on words for Borderline while also representing the transition she went through after the event. Photo courtesy of Hannah Albach

Junior Callie Mechelke is a singer-songwriter and graphic designer who has six tattoos. She said her favorite is the birds on her ribcage that she got in one of the oldest tattoo shops in the world, in Old City Jerusalem.

“The man who did it was the son of a son of a son — this tattoo shop has been in this family since they opened,” Mechelke said. “There’s so much history on my body right now. It makes it so much more significant.”

For inked Pepperdine students, a popular theme is getting tattoos while abroad. Albach got tattoos while she was abroad in Buenos Aires, Argentina and when she visited Honduras. Mechelke said abroad tattoos are not only cheaper, but they have their own sense of style, and that tattoos are very prominent through cultures.

Senior Marissa Moore has 30 tattoos and said one of her most memorable tattoo moments was when she was eating pizza in Florence, Italy; She picked a photo during dinner and got it tattooed right after. She got the words “Mai Da Sola,” which means “never alone” in Italian.

Moore said most of her tattoos are meaningful in someway to her life, but she has a few that she was drawn to aesthetically, which other inked students also agreed on. She said the saying is true, once you get one tattoo, you have an incessant need for more.

“A lot of people are nervous about the permanence of tattoos, which is very understandable, but the permanence excites me a lot,” Moore said. “I think it’s cool that you get to have control over whether or not a piece of art gets to stay on your body forever — it makes me feel really powerful and in touch with myself.”

Sean Graves, who goes by Suede Silver, is a Pepperdine 2016 graduate who now works as a music producer and tattoo artist. He tattoos Pepperdine students often and said he has doodled his whole life, even for Pepperdine’s campus through posters and art. He got a tattoo machine for Christmas one year and discovered his love.

“My teachers used to get so mad because I couldn’t resist drawing on the SAT bubbles as a teenager,” Silver said. “I would always use sharpies and eyeliner pens to draw on myself and my friends. I always fantasized about how cool it’d be to take little fun drawings and be able to tattoo them.” 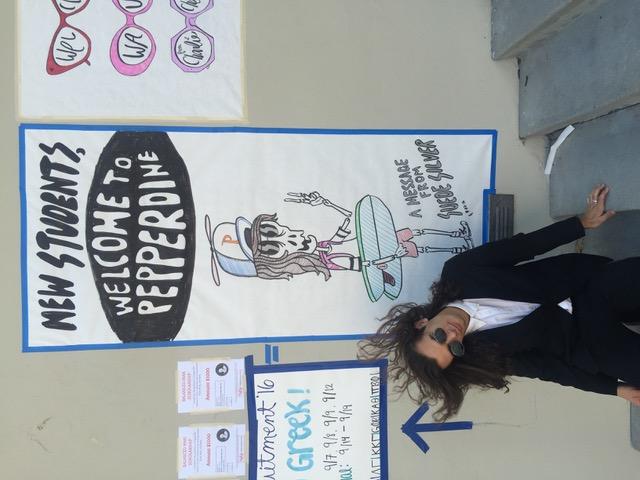 Tattoo artist Suede Silver poses by his artwork welcoming new students to Pepperdine in August 2016. He said the art he did in college heavily influenced his tattoo story. Photo courtesy of Suede Silver

Silver doesn’t have any tattoos himself, but has given his brothers many. He said he doesn’t actively seek tattoo clients, but when they come, he’s ready. This has made him evolve into the artist he is.

“The most memorable work I’ve done are the ones from the beginning — it was such a fun time doing tattoos for all my friends who trusted me,” Silver said. “I hardly knew what I was doing and we would set up anywhere possible. I’d have someone laying on a kitchen table with surf documentaries on in the background.”

Silver said his advice to any student wanting to get a tattoo is to start small and ease into it, maybe get something you can hide. This in return will help relatives ease into it.

“With relatives, the most important thing you can do is communicate lovingly and respectfully,” Silver said. “If it comes down to it, you can tell them that you appreciate their perspective and value it, even if it doesn’t line up exactly with yours.” 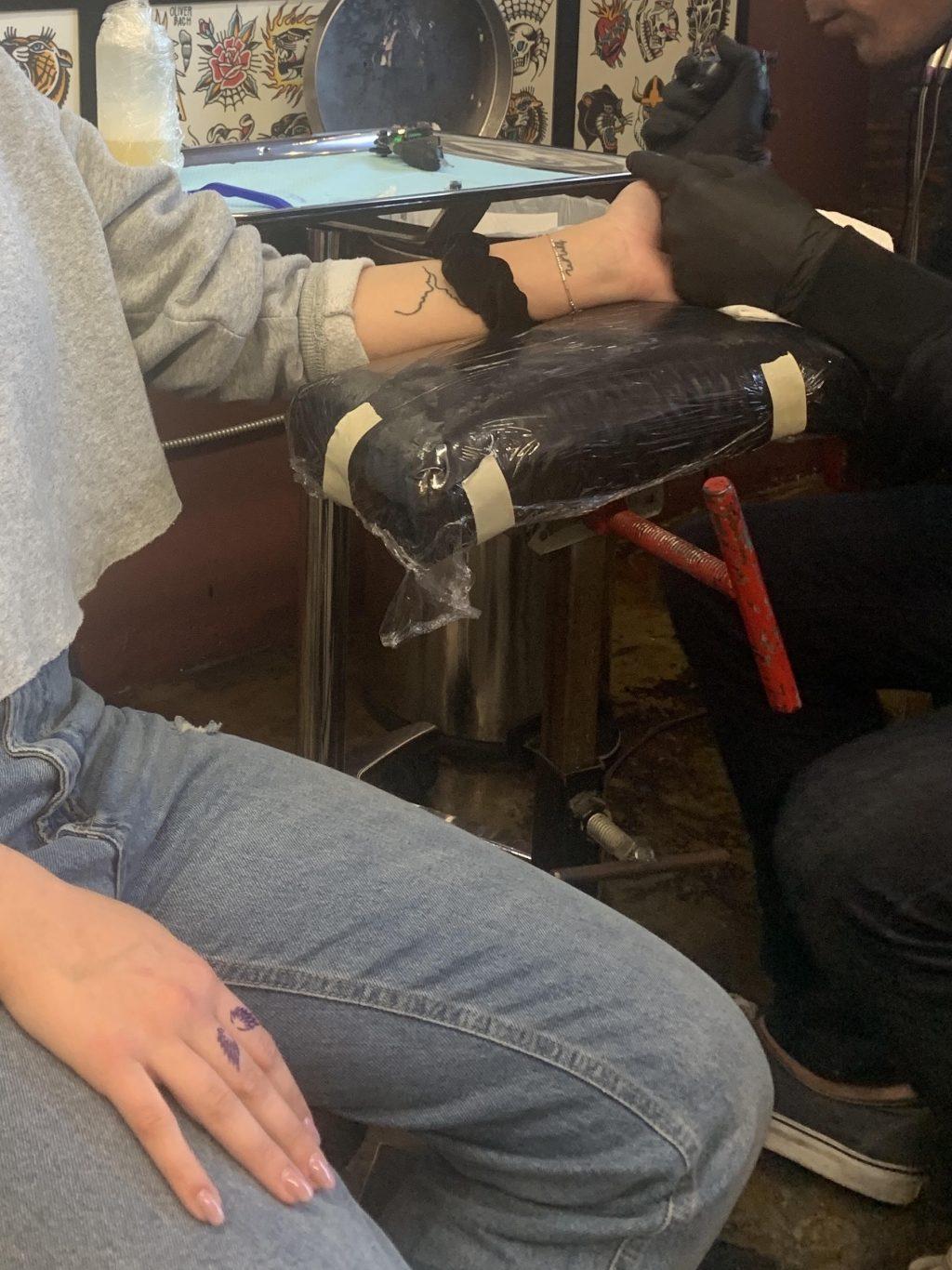 Moore sits for tattoos of angel wings and a little sparkle to be tattooed on her fingers at a shop in Los Angeles in January 2020. Moore said tattoos in LA are some of the most expensive, where minimum payments could range from $80 to $90. Photo courtesy of Marissa Moore

Moore said her parents cannot stand the fact that she has tattoos, but grew to be more accepting, even appreciating the meaning behind them. Albach said her parents didn’t support the idea, but began to adjust after they told her to make sure they can be hidden, as Albach is hoping to become a lawyer.

“It’s one of the only professions where it really does matter what other people think and the jury’s perception of you, because you can’t control who’s on the jury,” Albach said.

Mechelke said the culture in which tattoos are viewed negatively in the workplace is quickly changing as tattoos become more common and employers have a hard time finding people without them.

“I think that it’s shifting in terms of professionalism,” Mechelke said. “I think that the only thing that trips people up sometimes is when they say, ‘Oh, I just wanna make sure I’m able to cover it up’ and I’m like, ‘No, that defeats the purpose. You’re getting a tattoo to represent a part of you.'”

Albach said she thinks some people get caught in the mindset that we should not decorate ourselves in elaborate jewelry or clothes to maintain humility. However, she pointed out the verse Deuteronomy 6:8-9: “Tie them as reminders on your hands and bind them on your foreheads. Write them on the doorposts of your houses and on your gates.”

“In a spiritual sense, it is essentially a reminder of my relationship with God and how I can maintain that,” Albach said. “Little reminders of His peace and His love —they just help with my religion and that is my response to the traditional view.”

Silver said stigmas are dying pretty fast and if a company wouldn’t hire someone with tattoos, then it speaks volumes about their company culture and close-mindedness.

“It is important to be practical and smart though too,” Silver said. “If you’re an actor or model or something and are going to have to cover them up all the time, then it’s wise to consider those things when getting a tattoo.”

Moore said she can understand the backlash if someone has hateful or offensive tattoos, but if you are representing your soul, then not accepting them is silly.

“If I’m not hired somewhere to be a counselor because of my tattoos, that is just not a place that I would want to be working at anyway,” Moore said. 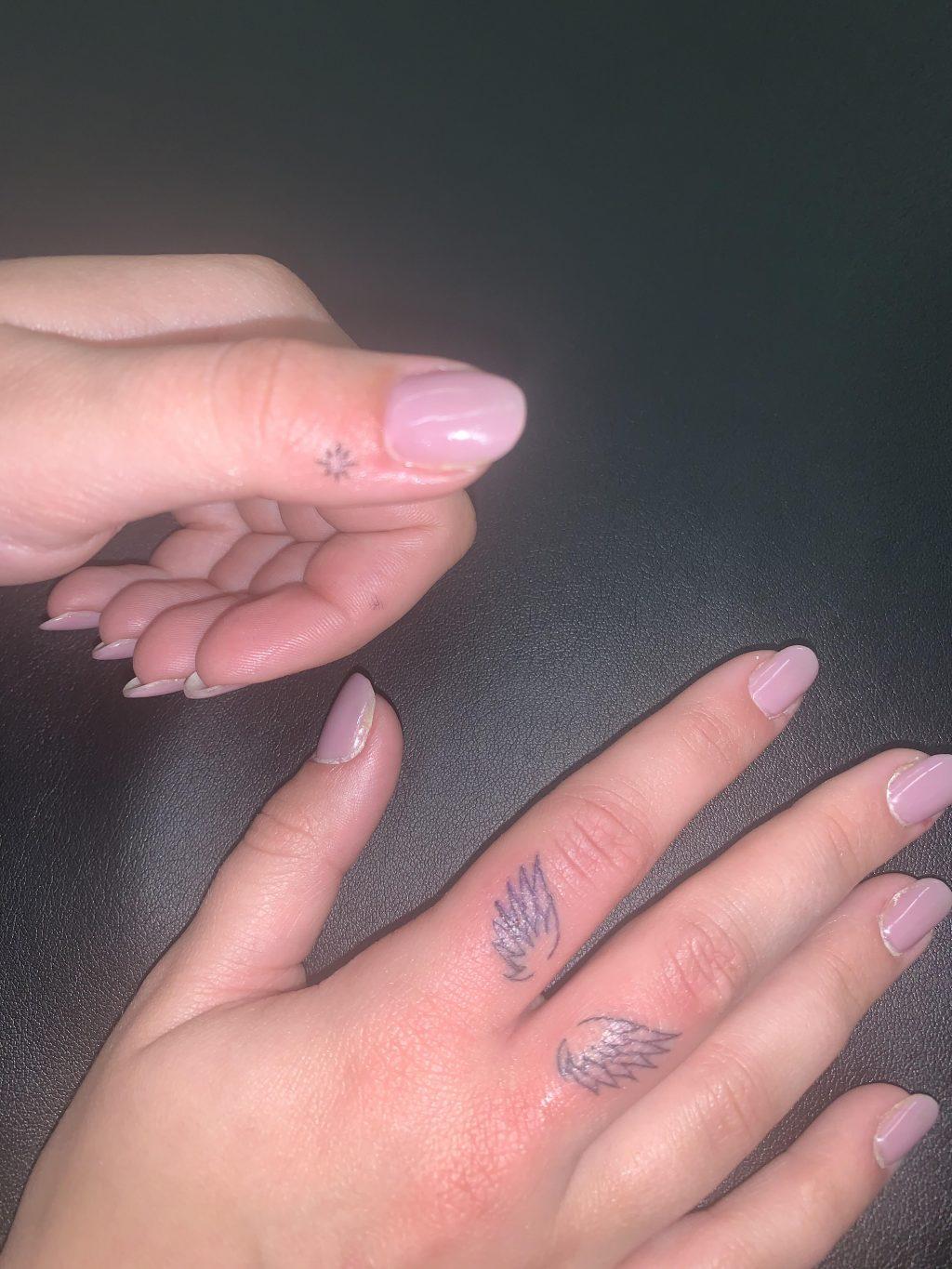 Moore shows off the finished result of her finger tattoo appointment in January 2020. Moore said she reads Yelp and Google Reviews before every new tattoo parlor she visits. Photo courtesy of Marissa Moore

Students agreed that they love the way their tattoos look. Whether it is looking in the mirror and feeling confident, or feeling gracious when they think back to that moment of their life, these students have no regrets and plan on getting more in the future.

“I love the aspect of conversational relationship building and that I’m able to share bits and pieces of my story with people by simply taking them on a tattoo tour,” Mechelke said.

Students agreed that art can reflect life in any way we desire it to. The allure is that within creativity, there is professionalism, abstract, symbolism, spirituality and more — the boundaries have no limits.

“I do think sometimes we have a tendency to focus on the here and now,” Albach said. “What do I need to do today? We don’t really think about the past experiences we’ve had. Art allows you to have your own sense of reflection.”

The Show Must Go On: Students and Staff Reimagine Songfest Virtually 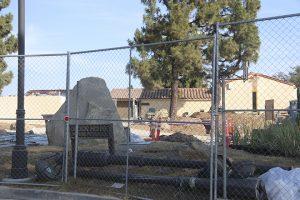