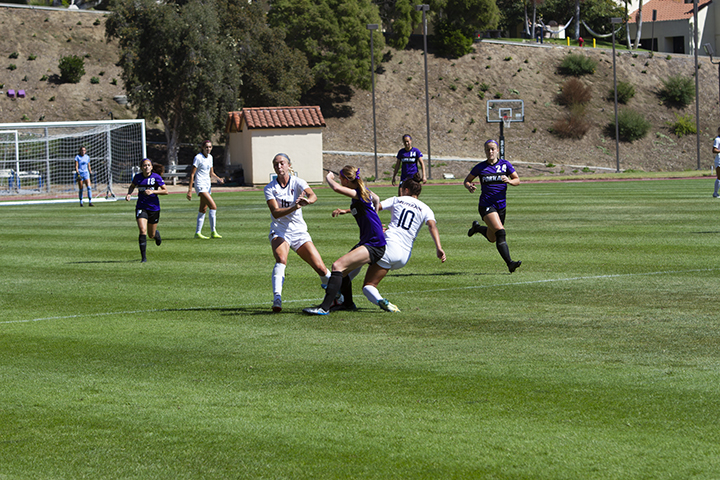 Three weeks after the last Pepperdine Women’s Soccer home game, the Waves showed up to a large crowd in their conference opener vs. the Portland Pilots. After a slow start from both teams, Pepperdine’s offense came together to beat a talented opponent.

The Waves had over one week to prepare for the Pilots following an away victory Sept. 26 against Northridge. On a warm and dry day, the Waves came out slightly off-tempo.

In the third minute, Portland nearly gave up an own goal on a ball that was deflected by a Pilot defender. Minutes later in the 11th, redshirt freshman forward Olivia Packer fired a bullet past the Portland defense that sailed over the goal.

From the opening whistle of the game, both teams were aggressive and chippy on the field. Head Coach Tim Ward said he was glad that his team now has a game of that nature under their belt.

Ward went on to say that with the physicality, he was surprised with a handful of calls from the referees.

“It’s funny because I wouldn’t call that a dirty game, but it was a physical game,” Ward said. “With all due respect to the officials, some of the calls just got away from him. The ref became the center of attention at times and that’s not supposed to happen.”

Pepperdine’s offense stayed aggressive as the first half rolled on. In the 29th minute, the Waves drew a foul off junior Portland defender Ellie Walker, forcing a penalty kick near the goal.

Trinity Watson attempted the PK, and she drilled the ball to the back of the net for the first score of the game.

Portland’s offense rallied hard in attempt to retie the game. After a Pepperdine foul, the Pilots tried a PK of their own, but redshirt freshman goalie Kinsey Ehmann made a diving block to keep the shutout going into the half.

Redshirt sophomore Laura Ishikawa said she was happy with how the defense executed.

“We worked so well as a team today,” Ishikawa said. “We communicated, held our line and stayed united. I think our preparation really showed today.”

To open the second half, the Pepperdine offense kept control of the ball and limited their mistakes. In the 58th minute, sophomore midfielder Leyla McFarland bust through the Portland defense and fired a shot that the Portland goalkeeper deflected out.

The ball went straight to senior midfielder Hailey Stenberg, who looked like she had a wide-open shot attempt before Portland defender Elliott Winkelmann got to the center of the goal and deflected it.

The offense kept up the pressure, and in the 61st minute, they broke through the Portland defense once more. Junior midfielder Joelle Anderson fired a pass to Stenberg on the right side of the field. Stenberg immediately crossed to the left, lost the defender and fired her shot to the left corner for another Pepperdine goal.

Stenberg now has a team-high three goals, and after the game, she said she was thrilled to see her most recent attempt go through.

“I was a little frustrated with myself after missing the first one,” Stenberg said. “Then Joelle [Anderson] played me such a great ball and I put my head down and we worked on one-on-one situations in practice. I had that in my back pocket, I fired the shot and am happy with the result.”

Anderson said the game plan was to set up deep passes to penetrate the defense.

“I was just looking for those long balls over the top,” Anderson said. “We knew there would be space there, and I was able to find Hailey and Leyla a couple of times. As a team, we did really well pressing them and attacking, and I’m glad we finished our opportunities.”

After the goal, Portland sped up their offense to get some points on the board. Ehmann had three of her five saves in the second half, but in the 80th minute, Portland drew a questionable penalty on the Waves and attempted another PK. Portland senior midfielder Larkin Russell converted her attempt and cut the Waves lead in half.

In the last 10 minutes of the contest, Pepperdine had two yellow cards called on them and Portland had some close attempts that could have sent the game into overtime. Ultimately, Pepperdine kept their lead and started conference play 1-0.

Stenberg said the team has made huge strides since the beginning of the season.

“This is definitely a younger team,” Stenberg said. “A lot of girls are playing with each other for the first time this season. But from the start of the year until now, our chemistry is so much better, and we’re getting into our rhythm.”

Pepperdine will travel to BYU on Wednesday to face the 10-0-1 Cougars, who are No. 8 in the country.

Ward said his team is ready for this stretch of conference opponents.

“Early on in the season, we gave away too many goals,” Ward said. “We don’t have to get hit by a bus again. Some of those losses definitely felt like we were. The girls are really strong mentally and physically. We’re a deep team, and that’s going to help us so much moving forward.”