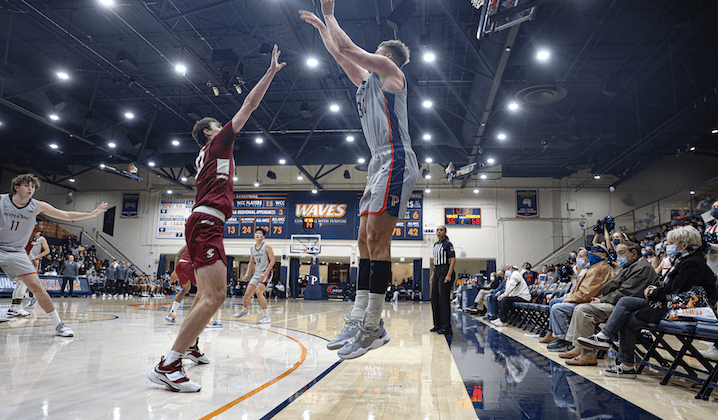 Junior forward Jan Zidek takes a contested shot from the three-point line Feb. 24. The Waves lost to the Broncos 89-73. Photos by Ryan Bough

The Waves came off of a nail-biting loss to Portland going into the matchup. Pepperdine lost 77-74 after a last-second miss at the three-point line. This game against Santa Clara marked the last home game for Pepperdine.

“Santa Clara is an excellent basketball team,” Head Coach Lorenzo Romar said. “Very good offensive team. They’re just experienced, and we thought we played with them for a while but then we ran out of gas and they were able to impose their will on us at the end.”

Family and friends welcomed the seniors as they made their way to the court. Alongside this, an assistant coach gave each of the seniors a frame that contained their jerseys and a photo of themselves. The crowd cheered as the announcer went down the line.

Senior guard Jay Yoon approached the court first marking the first start of his Pepperdine career versus Santa Clara. Yoon is a three-time WCC honor roll student and is graduating in Business Administration.

Senior center Victor Ohia Obioha waved at the crowd as he stepped up next. Posting an impressive .570 shooting percentage and racking up 61 blocks in his time at Pepperdine, Obioha will graduate with a degree in Psychology.

Senior guard DJ Polk followed the center. Polk was all about steals, accruing over 100 steals at Pepperdine and managed a one steal per game average while at the school. He is graduating with a degree in Sport Administration.

The last senior the crowd celebrated that night was redshirt senior Jade Smith. In his collegiate career, he put up over 900 points and snagged 500 rebounds. Smith is also graduating with a degree in Sport Administration.

“It was amazing, especially just all the things that I’ve been through over the years with this program, having my family here to support me, having my team around,” Smith said. “It was just a special feeling tonight. I wish we could have got the win. But it was a nice feeling to have my family supporting me.”

The seniors were in the spotlight the whole night, with Yoon going 4-7 from the field and picking up 10 points. Obioha led the team in rebounds with 13.

“The whole time I was just thinking play my hardest, you know, because the Senior Night; it’s been a long four years,” Obioha said. “So just knowing that this is my last home game, but as a senior, I just wanted to give it all that I had.”

Santa Clara made the first moves of the game, winning the jump ball and making two buckets back-to-back. Pepperdine, despite being down by four to begin the half, jumped into gear with a layup that junior forward Jan Zidek weaved through the paint. To add to this a layup from the hands of Yoon threw the crowd of fans into a frenzy leading to a Pepperdine 5-4 lead.

“I think individuals have gotten better,” Romar said. “I think that some players have settled in on their roles.”

Pepperdine continued to push into the paint and draw fouls. While this strategy kept the teams close in score, the Waves would then switch up their tactics mid-half and look for three-pointers and jump shots from mid-range.

Freshman guard Mike Mitchell Jr. and freshman guard Houston Mallette spearheaded this new focus, knocking down threes and jump shots to bring the score to a Pepperdine 20-17 lead at the 11-minute mark.

“Just being a threat on both sides,” Obioha said, about his strategy. “I’m scoring when I get the ball in there. And then on defense, just lock in there and then you know, doing everything the right way.”

Further trouble occurred for the Waves as players miscalculated the final ticking seconds and had to heave the ball over to a covered Zidek for a frantic final shot. Despite good power and accuracy, the shot wouldn’t fall leaving the Waves down seven going into the half.

Both Pepperdine and Santa Clara began the second half in a scoring drought, making the previously roaring student section hold its breath. This would continue on until Zidek scored a layup off a well-timed pass from Yoon bringing the Waves within five points. Finally, the student section let out a sigh of relief.

Though the Waves bridged the scoring gap early, Pepperdine gradually lost control more as the game went on. Struggling to catch up, Pepperdine’s offense looked more desperate, forcing shots and getting stuck in bad spots on the court.

Late in the half Pepperdine still could not make a run as they looked at a score of 80-70, Santa Clara lead. While making plays on defense, the Waves went whole minutes between scores.

Pepperdine was unable to cash a bucket from the middle of the seventh minute all the way to the 36-second mark. This sealed Pepperdine’s fate leading to the 89-73 loss.

“I’m gonna miss playing,” Smith said. “Competing with those guys and competing against them in practice every day. I love all of them. It’s been a great four years, it’s been a fun four years. I love every single one of these seniors and I hope they are successful in whatever they decide to do after this.”

The Waves took on San Diego for the first round of the WCC tournament March 3. The result of the game was a 74-67 loss for Pepperdine, ending their season there.