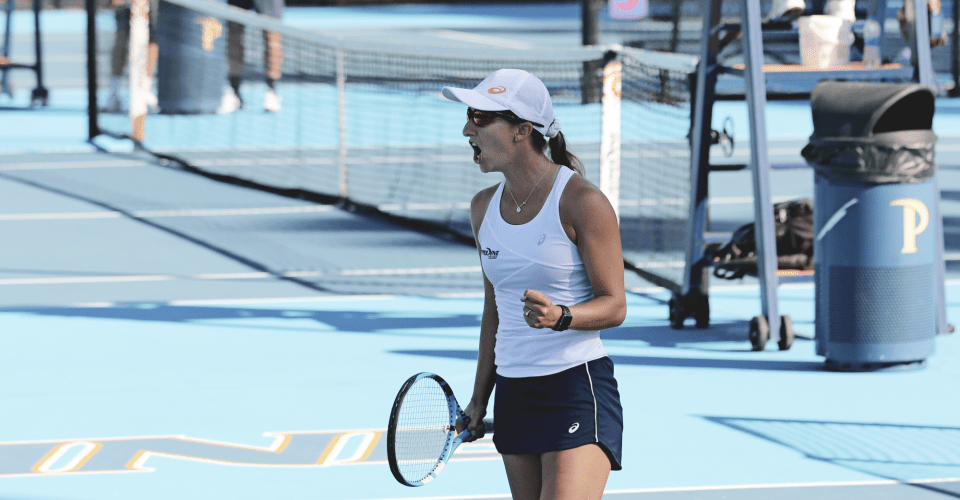 Graduate student Jessica Failla celebrates a point during a Women’s Tennis victory over No. 13 Oklahoma State on Feb 26. Failla rose as high as No. 4 in the individual rankings this season and has led the Waves to a No. 5 ranking, one of five Pepperdine programs in the Top 10 nationally. File photo by Ali Levens

When college sports – along with all of society – shut down in early spring of 2020 due to the onset of COVID-19, Pepperdine had six teams ranked in the Top 20 nationwide, a prolific athletic achievement for a school of its size.

A little over a year since that pause with sports back underway, the Waves have not only picked up where they left off, but stepped up their game in many sports.

Pepperdine has eight programs ranked in the Top 30 nationwide, with six in the Top 20 and five in the Top 10. That list doesn’t include the men’s basketball team, which made their first trip to the postseason since 2016 and came home with a CBI championship.

Every sport releases weekly rankings as a way to classify the up-to-date accomplishments of programs nationwide. The rankings use votes by program coaches, and in the case of more extensively covered sports like football and basketball, members of the Associated Press. Traditionally, the top 25 teams receiving votes get a national ranking, with the exception of tennis, which ranks the top 50.

Men’s Volleyball, while currently on a COVID-19 related pause, is in a good position to replicate their NCAA semifinal feat from two years ago, as they currently sit in a tie for No. 4 in the latest AVCA coaches poll. Pepperdine’s 11-5 record is slightly skewed by the fact that four of those losses have come to No. 2 BYU. The Waves are 4-1 against other members of the Top 15.

Pepperdine Water Polo completed its season as the No. 5 team in the CWPA final poll. The Waves navigated a Gold Coast Conference ravaged by COVID-19 opt-outs, defeating the only other participant, San Jose State, in a best-of-five series to take the conference title and finishing with an 11-3 overall record.

Unfortunately, because of their poor head-to-head record against top teams and the two-team GCC’s lack of an automatic bid, the Waves did not get selected for the six-team NCAA tournament field.

Women’s Tennis, ranked No. 5 in the latest ITA poll, may have the best resumé of any Waves team. Pepperdine sits at 13-2, with 9 of those wins coming against Top 25 opponents, and the only two losses coming on back-to-back days in February versus No. 1 North Carolina and then-No.2 UCLA, who the Waves beat in Malibu March 12.

The women’s tennis team has done most of this damage without Ashley Lahey, last season’s No. 1 overall singles player who has been injured for the majority of the year. In her absence, Jessica Failla has risen to a No. 14 individual ranking, with standout freshman Taisiya Pachkaleva clocking in at No. 115.

Men’s Golf, which finished 2020 ranked No. 1 in the country, is sitting at No. 7 in this week’s poll from Golfstat. The team has won two events this year and most recently competed at an event in Augusta, Ga., on the course famous for holding The Masters. The Waves held the lead entering the final day and finished second out of 15 competing programs, in a field which included four other Top 20 schools.

Pepperdine’s Beach Volleyball team comes in at No. 10 in the AVCA Coaches Poll. The Waves have an 8-12 overall record, but again are victims of repeated matchups with the nation’s top teams. Pepperdine has faced No. 1 UCLA and No. 2 USC a combined eight teams this year, failing to win. The Beach program remains the most recent Waves team to win a national title, grabbing the AVCA crown in 2012 and 2014.

The indoor Women’s Volleyball team is also having a strong season, finishing the regular season at No. 20 and recently qualifying for the NCAA tournament for the 24th time in program history. The Waves will play UMBC the first round and would advance to play No. 11 Baylor with a win. Pepperdine finished second in the WCC, behind No. 14 BYU and just ahead of No. 21 San Diego.

Women’s Soccer climbed back into the United Soccer Coaches rankings, returning to No. 25 after dropping out of the poll last week. Pepperdine has a season-defining match against BYU Saturday, March 10, in which the winner will clinch second place in the WCC and all but assure themselves a spot in the NCAA tournament, while the loser will have to sweat the selection process.

Men’s Tennis earned a No. 30 ranking in the latest ITA poll. The men are 9-5 on the season, but have some notable wins over No. 15 USC and No. 18 Oklahoma State.

The University of Denver has won the trophy in 7 straight and 11 out of the past 12 years, with Pepperdine’s 2012 win being the only interruption. The Waves also took home the trophy in 2005 and 2006.

With so many teams near the top of the national standings, Pepperdine is positioned to solidify themselves as a well-rounded athletic powerhouse, with a chance to potentially add to Pepperdine’s nine NCAA national titles. 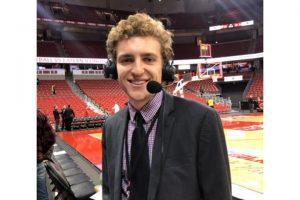 Wisconsinite Asher Low broadcasts a men's basketball game at the Kohl Center in Madison, Wis., in January 2020. Low has been...
Copyright 2013 Jupiter Premium Magazine Theme
Back to top