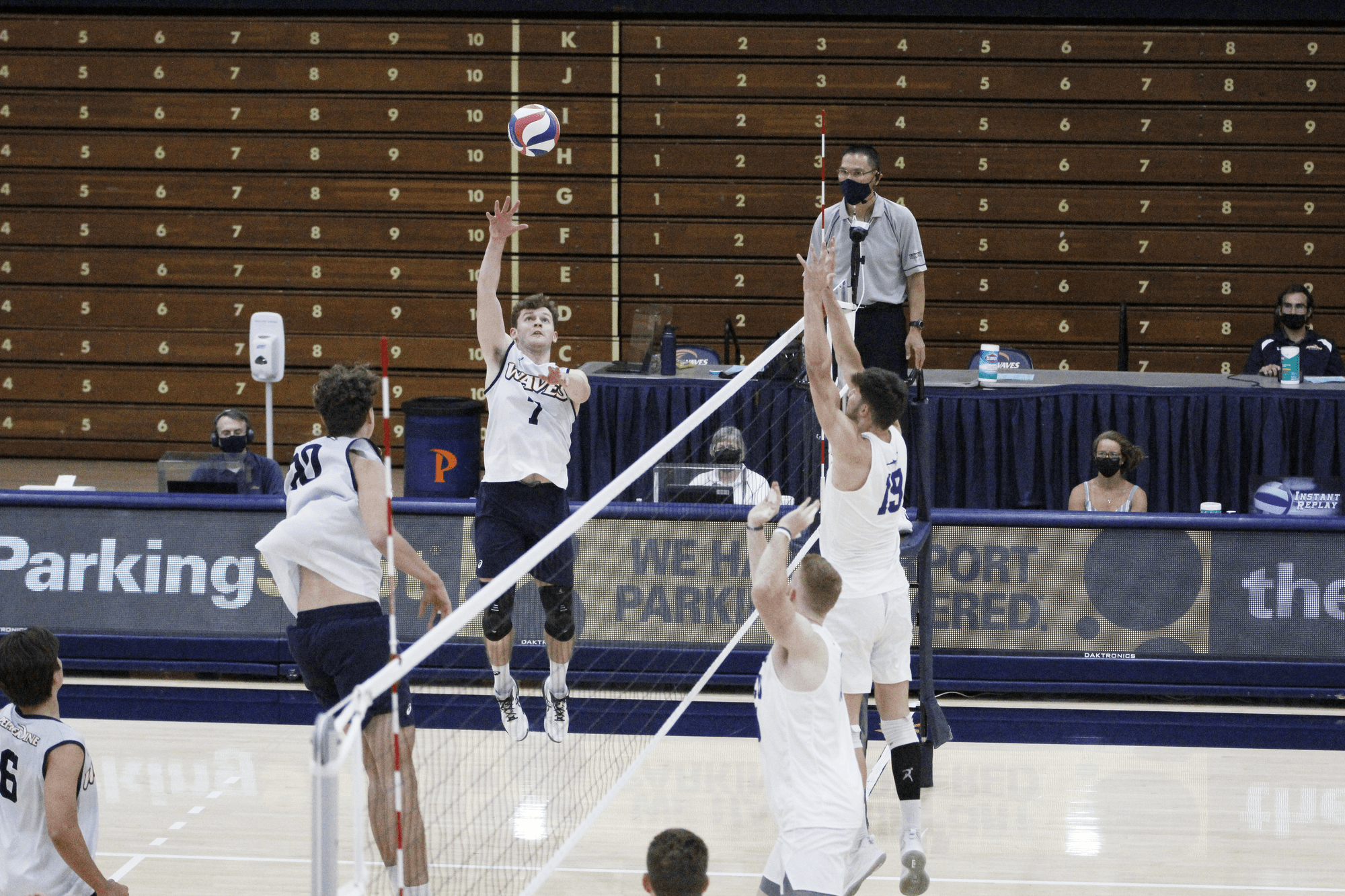 Senior outside hitter Spencer Wickens (No. 7) of Pepperdine Men’s Volleyball prepares to spike the ball against Grand Canyon University on March 28. The volleyball team was hit hard by COVID-19 and canceled or postponed multiple games. File photo by Keonabelle Paniagua

Within a seven-hour period, Pepperdine Baseball and Men’s Volleyball reported positive tests for COVID-19 and were forced to quarantine for 10 days and pause all team activities for a minimum of two weeks.

In a semester where fall, winter and spring sports are being played at one time, Pepperdine Athletics has suffered only minor hiccups with COVID-19 thus far, most recently a postponed home baseball game versus USC on March 9 due to a positive test. Now, both programs are forced to quarantine until next week due to two positive tests from each team.

“We’re at a point where people want to go out and do some things for fun,” senior outsider hitter Spencer Wickens said. “All it takes is one person to catch it accidentally and it could be over.”

Baseball was the first team to report a postponed game due to what the team’s Twitter called “COVID-19 protocols.”

“Early Tuesday morning, we heard about two positive tests from freshmen,” junior pitcher Grant Georges said. “It could’ve been from something as simple as going to the grocery store. But this is a lot different from our last positive test because contact tracing is a much bigger factor here.”

The report was 21 days after the team Pepperdine Baseball postponed a game against USC on March 9. The team was not held off the diamond for long as they traveled to UC Davis on March 12, for a three game series versus the Aggies.

Georges said the team didn’t have to quarantine due to the living situation of the player who tested positive.

“It wasn’t an issue because he was hardly around any of the other players,” Georges said. “He happens to be from the area and lives with one other player in an apartment. That’s where he spends most of his time, and because it was a short stretch where the whole team was laying low in-between games, they were the only guys that had to quarantine.”

This time around, the team had met together multiple times before their tests came back.

“We were all waiting on our tests from the previous weekend to come back before we left for UCLA,” Georges said. “I went to bed early that night after I saw that I tested negative. I woke up to 50 GroupMe notifications and another 100 iMessages. We were trying to figure out who tested positive before our coach texted us and let us know.”

The team had a Zoom meeting with Pepperdine Medical Director Dr. Lucy Larson who instructed them on the quarantine period. Larson said that all off-campus students were to sleep as far away from other roommates as possible and wear masks in their apartments.

Georges said his roommates have taken precautions but found difficulty abiding by all of the regulations.

“We’ve been careful,” Georges said. “I’m not gonna say we’ve spent 24 hours per day indoors and haven’t slipped out to make a food run. After additional testing and no symptoms we feel comfortable with trying to make things somewhat normal and also integrate at-home workouts.”

Junior pitcher Trevor Kniskern said he was surprised at the news of the positive test but is looking forward to the season resuming.

“What’s crazy is that none of us got it in the fall,” Kniskern said. “We thought the risk of getting it this semester was a lot lower, but it happens. We’re gonna control the controllables and move on when we’re cleared.”

Wickens, the reigning American Volleyball Coaches Association Player of the Week, said the volleyball team also found out Tuesday morning. One player initially tested positive, and after that player’s housemates were re-tested, a second player’s test came back positive, which shut down the whole team.

The team’s Twitter released a statement canceling their game the next day against UCLA. Wickens said the team met over Zoom twice this week to chat and play bingo.

According to Wickens, the source for the positive test originated from a housemate of the players who isn’t on the volleyball team.

“I don’t want to throw anyone under the bus,” Wickens said. “But this didn’t necessarily come from a guy on the team.”

Wickens said he understands the issue and that non-athletes don’t have the same incentive to avoid COVID-19.

“There’s a validity to it,” Wickens said. “If you’re not playing a sport here, you have less reason to sit around all day and do nothing and the team gets that.”

According to an update from Pepperdine Athletics, the Men’s Volleyball team will not play until a rescheduled away match April 16 against Stanford for the Waves’ regular season finale. The team is currently tied for fourth in AVCA national rankings with an 11-5 record.

Wickens said the team and Head Coach David Hunt are taking advantage of the rest and look forward to the postseason, starting with the MPSF tournament April 22.

“Coach has been supportive of us and he’s excited to start back up,” Wickens said. “We’re using this time to get our bodies back to 100% and prepare for the tournament.”