We’ve reached the halfway point of the 2022-23 NFL season, and Week 8 sure was something special.

Tennessee Titans running back Derrick Henry rushed for over 200 yards, Arizona Cardinals quarterback Kyler Murray threw multiple interceptions in a game and Cincinnati Bengals quarterback Joe Burrow got sacked, like, a bunch of times. Truly, it was a week unlike any other.

The Philadelphia Eagles continued their seven-game winning streak with a 35-13 win over the Pittsburgh Steelers, while the Detroit Lions and Jacksonville Jaguars both dropped their fifth straight games. Up north, the Minnesota Vikings took a commanding lead of their division through a 34-26 win over the struggling Cardinals.

Week 9 is headlined by an AFC showdown between two 5-2 teams, as the Titans battle the Kansas City Chiefs on Nov. 6. There’s also a rematch of that 2021 NFC Divisional Round game between the Los Angeles Rams and the Tampa Bay Buccaneers, as quarterback Tom Brady tries to prove he still has something left in the tank.

News Editor Samantha Torre keeps control of the top spot in the NFL Picks standings, while Sports Assistant Editor Alec Matulka and Special Edition Editor Ali Levens keep hold of the other spots on the podium. After forgetting to submit their picks in time for Week 8, Sports Editor Jerry Jiang and staff writers Jaan Jafri and Maximilian Pohlenz remain comatose on the wrong half of the table.

As singer Frank Ocean said, it’s all downhill from here. 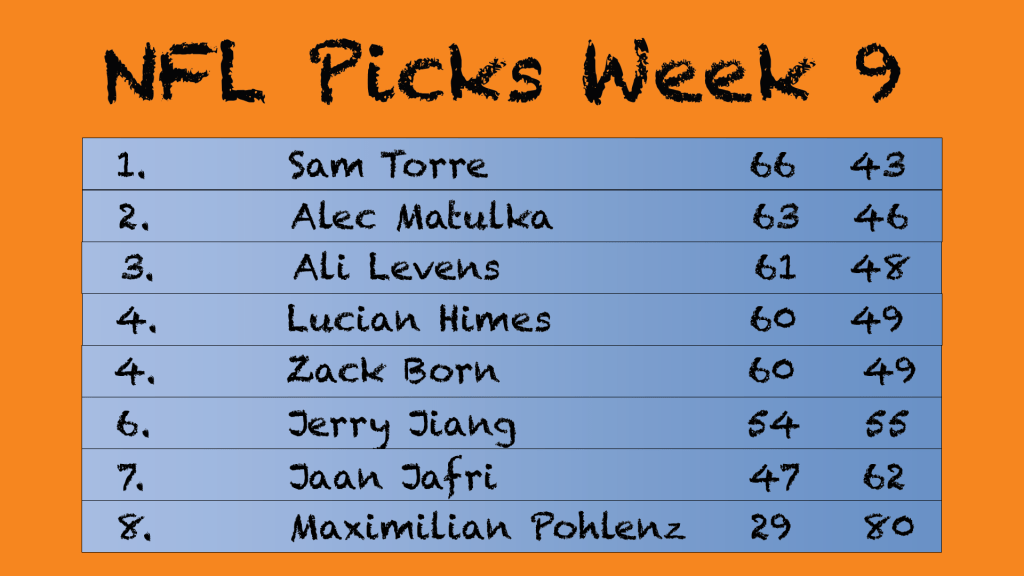 “The Texans have literally the worst name out of the entire NFL, so for that alone, I’m voting against them.” — Sam

“This will be the second most exciting matchup between Houston and Philly on Thursday, Nov. 3.” — Zack

“Purely because I need Aaron Jones to go off for my fantasy team.” — Lucian

“I had a really good cheese sandwich the other day, so this is me chasing that high.” — Sam

“The Bengals could lose 16 straight games and I’d still pick them in the 17th. Joe Burrow could kill my whole family and I’d still pray for his success. Why? Because Cincinnati is the GOAT city in Ohio.” — Alec

“I guess you could say this is a classic cat fight. Meeeeee-ow.” — Ali

“The Bengals just lost to the Browns. But the Panthers lost their best players so…” — Lucian

“Was Christian McCaffrey holding back the Panthers this entire time? No.” — Zack

“Believe it or not, the Seahawks are top of their division. I’m taking off my Jimmy Garoppolo backup jersey and I’m starting to believe.” — Alec

“From one formerly sucky division (NFC East), trust me — it’s not impressive to lead your division when you’re barely over .500. This is also revenge for the Seahawks beating the Giants last week. Y’all are not that good.” — Ali

“Maybe if I keep picking Seattle teams, Alec will stop bugging me about turning in my NFL Picks.” — Jerry

“The under-performers vs. the over-performers. You could call this matchup the battle of the performers. It’s not a very interesting name, but it is technically true.” — Zack

“Derrick Henry popped off again against the Texans last week, logging 219 rushing yards and 2 touchdowns on 32 attempts. I mean, it’s the Texans, sure. But this dude is still big time.” — Alec

“No, Jaan, please don’t bring back Jackson Mahomes. He comes back and we all lose.” — Lucian

“I’m here to be entertained. So yes, Jaan, bring back Jackson Mahomes.” — Sam

“The Saints have a top three logo in the NFL, but even that won’t be enough to overcome this dynamic Ravens team.” — Alec

“As a team with an actual top-three logo in the NFL, it is expected that they will best the Saints due to Poe being an absolute BEAST.” — Ali

“Saying hi to my friend who covers the Ravens, so I can get a job.” — Jerry