A newsroom with racially diverse staff is the first step toward creating thoughtful, racially diverse news coverage. Without a variety of backgrounds among professional journalists reporting on diverse issues, mainstream news consumers might question the validity of a media organization’s content.

As of 2018, people of color made up only 23% of newsroom staff in the United States, according to Pew Research Center.

In 2020, the Los Angeles Times’ staff had fewer than 6% Black employees when the L.A. Times Guilds’ Black Caucus sent an open letter to the owner of the publication. The letter claimed the LA Times’ workplace marginalized journalists of color and created an un-inclusive space for Black journalists in particular.

L.A. County also has one of the largest Hispanic/Latino populations in the country — totaling nearly half of the population. Yet, the L.A. Times newsroom staff consists of just under 32% Hispanic/Latino staff, according to its website.

Clearly, there is a disparity between the staff of one of the major news publications in the country and the population the publication represents in its stories. In fact, before 2020, the newspaper did not even have a diversity report to keep track of numbers relating to demographics of staff.

Not all newsrooms pay attention to diversity, though. There are several places around the U.S. that lack racial diversity, but that does not mean newsrooms should also have low racial diversity. For this reason, newsroom staff should not necessarily match the demographics of society, but instead be racially diverse regardless.

A newsroom rich with different racial backgrounds emphasizes the importance of diverse voices and stories — which all people should have exposure to.

Hiring people of color is not the only step newsrooms need to take to expand racial diversity within a publication.

Newsrooms must not only have racially diverse staff, but those in leadership positions must also be racially diverse. This will show that those voices and perspectives are valued and listened to, and consumers will in turn feel valued as well.

Media outlets are making progress, but not fast enough. MSNBC named Rashida Jones president in February 2021, followed by Kimberly Godwin taking on the role of president of ABC News in April 2021. These women made history being the first Black presidents of major broadcast news organizations after they have existed for decades — but it should not have taken that long.

Reuters Institute published a study in 2021 that showed viewers of media base much of their trust on what they can see and the outlet’s type of leadership — including whether it is racially diverse.

Simply having reporters with diverse racial backgrounds will not result in publication of stories with diverse topics and sources. Those reporters must also have emotional support, equal pay, mentors and empowerment to come forward with stories that matter to them.

Trust in the Media

Racial diversity within a newsroom also builds trust with consumers. Knowing that a journalist has first-hand experience to the topic is powerful for a reader or viewer.

CNN reporter Sara Sidner memorably teared up on-air while reporting on the protests following George Floyd’s murder in summer 2020. As a Black woman, Sidner said racism was something she knew all too well.

Sidner also said this was a story she was proud to be able to report on, and one that was meaningful for viewers to see her report on as a woman of color.

“On the one hand, protesters sometimes believe I understand them because we likely have a shared experience,” Sidner wrote in a June 2020 article for CNN. “And they are correct. On the other hand, some police see me as a protester, another Black face in the crowd even when I identify myself as a journalist.

Journalists learn to be neutral and remain unbiased. However, reporters should be able to cover stories they can relate to, because they may better know what questions to ask and the people they speak with may feel a sense of common understanding.

There have been numerous examples of racially ignorant mistakes journalists have made that caused their audiences to feel there was not a sense of thoughtfulness or understanding within the newsrooms. One example is from February 2020, when Kobe Bryant died in a helicopter crash, and BBC aired footage of LeBron James — with the producer mistaking him for Bryant. Viewers on Twitter pointed out that James’ jersey clearly stated his name in the clips and questioned whether the mixup would have happened between two famous white men.

An IPSOS study showed from 2014 to 2019, public trust in print media decreased by 16%. The data exhibited people are more likely to trust local media because proximity makes news organizations able to better understand and address its audience’s interests and concerns.

A 2020 Forbes article highlighted the importance of racially diversifying newsrooms to go against the polarization of minority groups that is present in much of the nation. If consumers feel polarization seeping into their news content, they will quickly distrust the media, and hiring racially diverse staff can reverse that effect.

If news consumers knew a newsroom was filled with people who represented them racially, they would likely be more confident in the media’s ability to understand and accurately cover issues important to them, a Kerner Commission Report obtained by Nieman Lab concluded.

According to World Economic Forum, members of society value news that reflect themselves.

All newsrooms have work to do to become more racially diverse and gain the trust of its audiences. In PGM’s newsroom, during the 2021-22 academic year, 49% of staff is white, according to internal survey data.

PGM has an open-door policy that welcomes all serious applicants and provides training throughout the semester. In the past, the Graphic has offered weekly space in the Perspectives section to identity-based organizations rather than having the Graphic tell their stories for them. 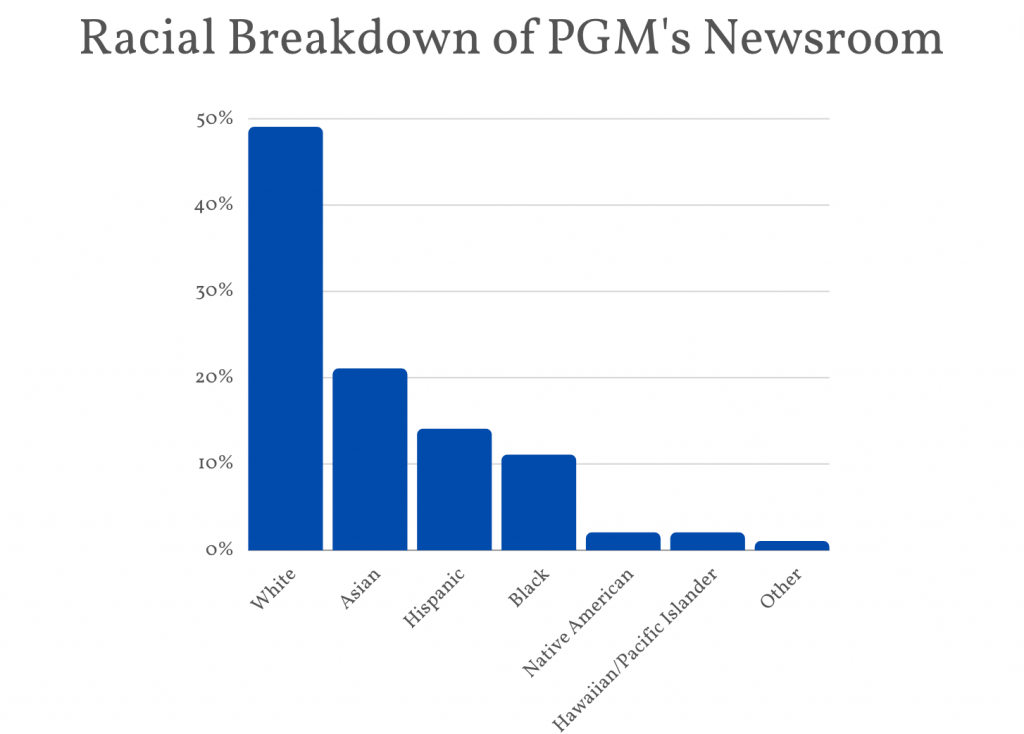 In 1968, Pepperdine students created the Black Graphic to amplify Black voices in a way they did not see the Graphic doing. In 1969, the Black Graphic covered the death of Larry Kimmons — who a DPS officer shot and killed on the former LA Pepperdine campus — and wrote about the importance of teaching Black studies at Pepperdine.

Because of the lack of coverage on racial issues at the Graphic during that time, Black students felt the need to publish their own newspaper to fill that gap. It is important that news organizations are inclusive of all news and all journalists, and the Graphic is working toward doing that.

In October 2021, the Graphic published a Staff Editorial about Chumash Land with misuse of the Santa Ynez Band of Chumash Indians‘ official logo, and the Graphic subsequently made an apology to them, as well as a correction on the page.

Similar to the way the BBC made a racially insensitive error, the Graphic did as well. Not only does PGM take responsibility for its mistakes, but the Graphic is committed to doing better. An example is recently creating a Diversity, Equity and Inclusion editor position to place a greater emphasis on these values in all aspects of the organization.

Journalists are people, but they also work for the people. Without a racially diverse newsroom, journalists cannot provide an accurate depiction of the racially diverse society we live in. There is always more work to be done, and newsroom racial diversity is only a small part of a much bigger picture regarding diversity within the media.