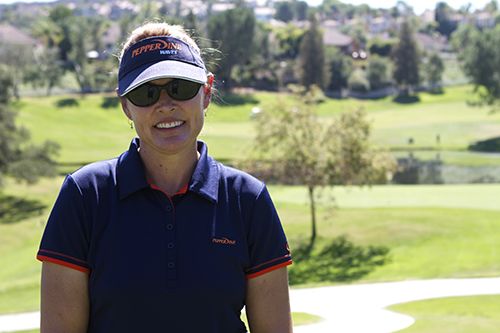 “They say you can tell a lot about a person’s character by going out and playing golf with them,” Gibbs said.

During her time, she has taken a low-funded program and made it a national powerhouse. Women passing through her program have gone on to succeed as golfers, wives, mothers and businesswomen.

“My motto is: ‘Success is a journey, not a destination,’” Gibbs said. “I want players to be successful as people, in education, in faith and for them to come together.”

Although Gibbs knows that winning isn’t everything, her green grows champions. During her journey with the Waves, she has turned her squads into national contenders. The Waves have won 15 WCC titles in the past 16 years.

The Waves have also appeared in the NCAA Championships 11 times, with eight top-10 finishes and four top-five showings, including a second-place finish in 2003.

Although Gibbs may not be quick to credit herself, her record speaks for itself: the WCC has awarded her with 11 Coach of the Year titles, and Golf Week selected her as the National Coach in 2004-05.

“You can’t do this by yourself,” Gibbs said. “The Athletics Department is great. Dr. [Steve] Potts is so supportive. They allow us to be coaches and are open to doing what we want to make the program the best it can be. I’ve been blessed with wonderful players.”

It is no easy task to be recruited to one of the top caliber golf programs in the nation, but the most dedicated players from around the world fight to make the cut.

Gibbs’s players have earned All-American honors 24 times over the past 21 seasons, and as the seasons go on, Gibbs continues to make an impression on her athletes and learns from them in the process. She understands that sometimes being a good coach means being a player’s biggest fan.

“Life gets busy, so I always tell them, ‘You can come back to me. I’ll be here for you,’” Gibbs said. “I got an email not too long ago from a player that I had when I first started coaching. Now she has children and a family. She’s still involved as an alum.”

Before her career as one of the top women’s golf coaches in the nation, Gibbs taught PGA professional classes and competed on the Women’s Western Professional Golf Tour. She also authored and marketed a golf reference guide called ProTips.

Gibbs draws support from her team, her assistant coaches and her family. She lives in Calabasas with her husband, daughter and son. Her son has begun to have a knack for golf and hits a bucket occasionally with mom.

“You have to have support and you have to have people believing in what you’re doing to be successful,” Gibbs said. “Here it’s a little more than about what you’ve done; rather, it’s about growing in character and growing in learning.

“It’s not all about winning and losing.”

Playing a game of golf is not necessary to know who Gibbs is and what she stands for. After 21 years, she continues to dedicate her time to her girls on the course and support them in life — every stroke of the way.

Above average and under par 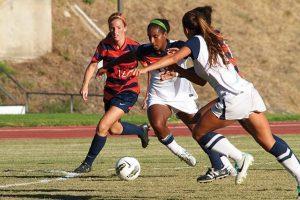 Photo by Marisa Padilla Women’s soccer, now ranked at No. 50, faced Cal State Fullerton in a game that ended in a fierce...
Copyright 2013 Jupiter Premium Magazine Theme
Back to top