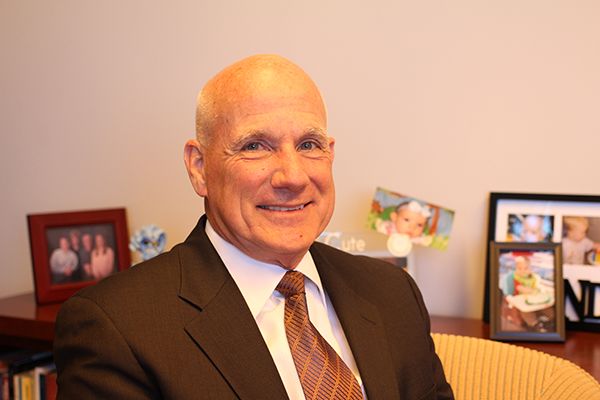 Former Dean of Seaver College, Rick Marrs, a man of scripture, academia, adventure and a proud grandfather of five was appointed the new provost of Pepperdine Aug. 1.

Just into his third week as provost, Marrs discussed his plans and aspirations for the schools on the Malibu campus as well as the four other graduate and professional schools of the university.

As provost, Marrs will manage and oversee all administration, coordination and the development of all academic functions and activities of the university. Additionally, he works with other deans of Pepperdine’s four other graduate and professional schools while also supervising the library, the Office of Institutional Effectiveness, One-Stop, Information Technology, the Center for Faith and Learning, the Center for Entertainment, Media and Culture, the Disabilities Services Office and the Office of Research and Sponsored Programs.

Among his responsibilities working with Benton, he is also heading the search for a new Seaver dean to replace him.

Benton said he admires and respects Marrs and looks forward to their collaboration.

“At the end of the national search for the new provost, we selected someone we knew very well whose work we admired, and I must say that his awareness of the university community, our strategic planning and budgeting practices and his very willing spirit have all yielded a very effective provost in the first 21 days of his service,” Benton said. “I am very impressed by his level of energy, attention to detail and commitment to all five schools of Pepperdine University.”

“I first met Rick Marrs when he came to my freshman seminar class and even though I may not know him that well, what he spoke about in my class impacted me,” junior Edwin Duran said.

Duran said Marrs spoke about vocation and how living a life of substance and depth was more fulfilling than one filled with riches. Duran said he is happy to know that he’s now serving as Pepperdine’s new provost because he believes it will strengthen the academy’s foundation.

Marrs explained his plans for the future as provost, including becoming more effective as a community between Seaver undergraduate and the different graduate schools. “I want to maximize the talent that we have here,” he said.

Marrs said he feels “like I have been here long enough that I know Seaver really well, and I know some things about the other schools,” but that most of his knowledge of the other schools has come from interacting with their deans.

Marrs began his academic career at Pepperdine in the religion division in 1987, then was later named dean of Seaver College in 2008.

Even when Marrs became dean, he occasionally taught Religion 101 because he believed it made him more accessible to students. Marrs’ name and reputation was widely known throughout the campus; his face, however, was not. By teaching undergraduate religion classes, it was “a nice way to familiarize myself with a bunch of the students.”

An expert in the Old Testament and as a member of the Society of Biblical Literature and the Catholic Biblical Association, Marrs said he will draw upon “Prophetic literature and Pslams Literature, specifically the Prophets” in his new leadership position.

As dean of Seaver,  Marrs interacted the most with student leaders who had “neat projects that needed help with funding, such as Model U.N. and [the] National Prayer Breakfast.” That is how he would stay connected on the student academic side.

Marrs also said he believes in an “open door policy.” That policy is still in effect as Marrs is making the transition from dean to provost.

In his downtime, Marrs said he enjoys riding ATVs to unwind after busy days at the office. He started riding about two years ago and owns and rides three different vehicles through the mountainous trails of Santa Clarita and the old mining trails in the Mojave Desert.

One of Marrs’ main goals as provost this year is to “collaborate more among the five different schools.” Marrs has a preliminary plan to get the ball rolling on this.

“The West L.A. campus is used mostly for the Graduate School of Education and Psychology and Graziadio School of Business and Management,” he said.

Marrs said he plans on spending one afternoon a week at the L.A. campus to allow students and faculty members opportunities to meet with him.

“I don’t know him very well, but I can tell that he’s very excited about his position by the way he spoke to the new students and their parents during NSO,” junior Jazmyne Adeneye said. “And I’m excited to see what he does to better Pepperdine.”

To become more aware about what the potential challenges and needs are, Marrs said he wants to set up focus groups with all the different schools as soon as the school year begins.

“Those focus groups will have two main questions to them,” he said. “What would they like me to know about their school or program? And then their challenges in those communities, and how can I help them?”

After having these focus groups, Marrs will go back and “simply listen to what they have to say and try to move forward thinking ‘OK, how can I best help them?’”

Marrs completed his doctorate degree in Near Eastern Studies at Johns Hopkins University, something that he said made teaching entrenched in his soul. “The most fun thing is to be in a classroom with students,” he said.

“I think he was a great dean of Seaver, and I’m glad that we can share him with the whole university,” sophomore Mika Inoue said.

Marrs’ office is located on the fourth floor in the Thorton Academic Center. He said his transition from dean to provost has been a smooth one, aided by Benton and other university officials.

Marrs joked that he “literally moved to the office upstairs.” Regardless, Marrs thanks faculty and administrative members for being helpful in accommodating and getting him up to speed on all the administrative tasks.