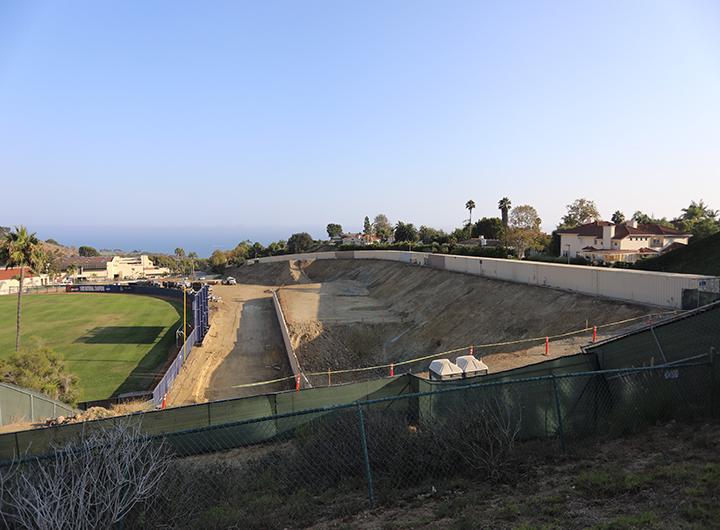 Construction is underway on the new parking lots next to John Tyler Drive. The project launched in August and will expand the current lots to add 200 spaces or so, according to a Sept. 7 email from Director of Public Safety Dawn Emrich. Photo by Ryan Brinkman

With dozens of metal storage containers and delineators lining the street, Pepperdine embarked on another step to continue the slow climb toward The Mountain student center.

The administration planned to have the parking lot finished by August 2021, but due to COVID-19 budgetary setbacks on capital projects, Pepperdine delayed the project until 2022.

The location is uniquely positioned to expand parking opportunities for students living in Seaside Residence Hall as well as provide alternate parking when the University has to close Rho lot for The Mountain’s construction.

“[Mountain] construction will take two years, and [Rho] parking lot will have to be closed at least a year,” Chief Operations Officer Phil Phillips said in a March 10 interview with the Graphic. “So where does everyone park?”

The University’s solution: The new lot on John Tyler.

For now, the construction restricts street parking along both sides of the street due to the sound barriers lining one side of the road to allow space for the shuttles, according to the June 25 Public Relations email.

The sound barriers, recognizable as the line of a dozen plus metal storage containers, are noise impact measures.

“Part of the project is we have to identify any impact measures and noise is a big one for our neighbors,” Phillips said.

The neighbors in question are the ones across the street from the project in multi-million dollar homes on Malibu Country Drive.

Additional features of the project include installing a new underground storage vault infrastructure to capture and filter stormwater, as well as landscaping improvements and new pedestrian access.

The University opted to use storage containers as sound deterrents because they’re not too tall and are able to withstand the wind, Phillips said.

The storage vault will store a variety of items, Phillips said, including athletic equipment (like goal posts), parts for the University’s central plant and other construction materials like wood and sheeting. The storage will help consolidate some materials currently stored at the Calabasas campus or in off-site units.

In a stroke of sustainable genius, the University will use dirt stored on Drescher campus to cover and cool the underground storage, Phillips said. This allows Pepperdine to reuse old dirt and reduce its environmental impact while also saving money on cool storage because it will not require air-conditioning.

The lot is expected to open in August 2022, 13 months after its start, but the return of street parking along John Tyler has yet to be determined. The sound barriers will stay up until they’re no longer required to mitigate construction noise, according to the June 25 PR email.