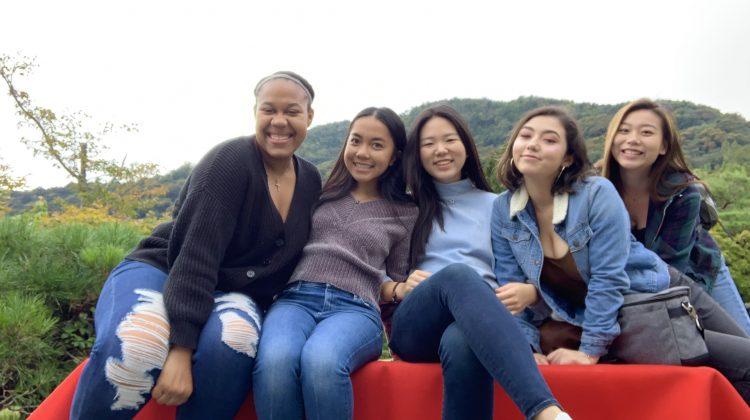 Yoon, in the middle, poses with her friends during her time with Pepperdine IP’s Shanghai program. Yoon said Shanghai was one of the most favorite moments of her Pepperdine experience. Photos courtesy of Karen Yoon

Karen Yoon was among the last cohort to attend the International Program’s Shanghai program. Yoon said her journey in Shanghai was one of the most pivotal moments of her time at Pepperdine.

“Being there and living there made me realize, ‘Oh I’m actually Korean,’” Yoon said.

Yoon said she never struggled to accept her identity as a Korean. However, she said attending the Shanghai program and traveling around Asia made her fully acknowledge her Korean heritage.

“Going to Shanghai was actually my first time visiting Asia at all,” Yoon said.

Born and raised in São Paulo, Brazil, Yoon spent the first 16 years of her life in the most populated city in Brazil, which is a big part of her identity. During the second semester of her sophomore year in high school, Yoon moved to Fullerton, Calif., for a homestay program.

“[Brazil] was the foundation of my initial years, I feel like it has a really big impact on my personality, how I interact with people and my surroundings too,” Yoon said. “I’ve been becoming more salient, since I came to the U.S., toward my Asian part of my identity.”

Growing up, Yoon said the Asian communities in Brazil were not as substantial because they were mostly assimilated to Brazilian culture. Yoon said moving to Orange County, where there is a much larger Asian population than Sao Paulo, allowed her to learn a little bit more about her Asian heritage.

However, at Pepperdine, Yoon said there have been instances when she felt as if the school’s attempt at conveying Asian cultures was somewhat questionable. Because there is no college town in Malibu, Yoon said the only place you meet people at Pepperdine is through University-affiliated events. To Yoon, these occasions did not seem “organic.”

Contrastingly, Yoon said her time in Shanghai, although it was interrupted due to COVID-19, has been one of the most cherished moments of her life thus far. Yoon traveled around Asia extensively, including Japan, Thailand and South Korea.

“Everyone interacted with everyone because we were forced into an environment that no one knew,” Yoon said. “And we would actually be motivated to explore the city and do stuff together.”

Other than forming natural friendships, Yoon said Shanghai was also a place of introspection.

“When I was in Asia, I never felt like I had to explain my identity to anyone,” Yoon said. “You’re automatically a part of the in-group without even trying or having to explain and that felt different.”

Because of her experience of being able to connect with other students and connect with her own heritage on a deeper level, Yoon said the cancellation of the Shanghai program was such devastating news.

“It was a missed opportunity for Asian kids or Asian-American kids who didn’t get to visit their motherland growing up,” Yoon said. “It was a shame.”

Yoon works at the Office of International Programs as a graphic design intern. Yoon said her experience in Shanghai motivated her to work for this department.

“Because I had such a good experience in studying abroad, I want more people to experience it,” Yoon said.