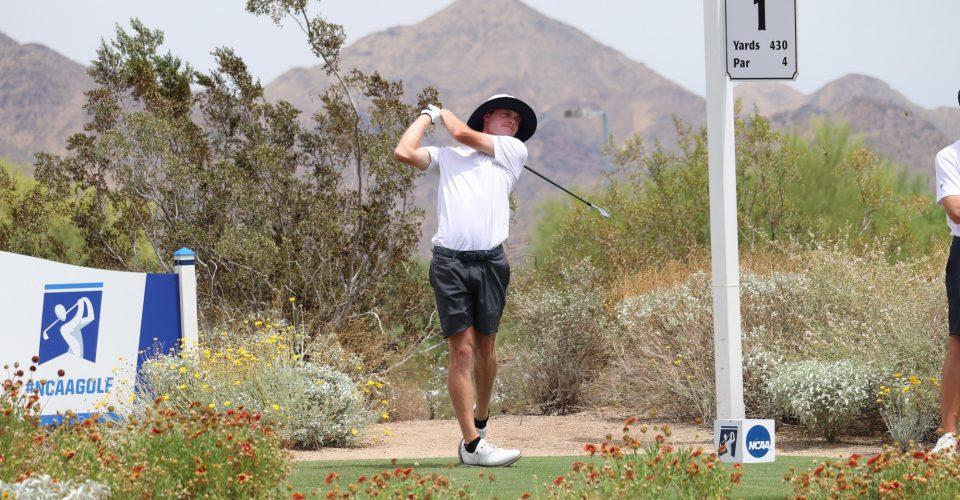 Then-junior Joe Highsmith competes in the NCAA Golf Championship in Scottsdale, Ari., on June 2. Highsmith said there were a couple hundred people at the match supporting the team. Photos courtesy of Pepperdine Athletics

Men’s golf has a chance to do something no other Pepperdine team has done in the past: repeat as national champions. It’s one challenge to win a national championship, but it’s another to do it again the following year.

Two seasons ago, Pepperdine went into the postseason with high expectations as the No. 1 ranked team in the nation. With the 2020 season canceled due to the pandemic, the Waves said they were disappointed by the lost opportunity, especially since they had the one of the best golfers in college, then-redshirt senior Sahith Theegala.

“Basically, having the best year of the program being cut short was extremely disappointing,” Head Coach Michael Beard said. “We lost the number-one player in college. Coming back the next year, I remember telling the guys that people were saying that we were so good because of one player.”

The Waves heard the critics, and when play resumed, players said they were eager to prove them wrong.

While preparing for what would be the championship season, Beard said he quickly realized there was something unique about the team.

“To be honest, it was three practices in that I looked at Blaine [Woodroof] and Chris [Zambri] and said that this was something special; we had never seen a team like this ever,” Beard said. 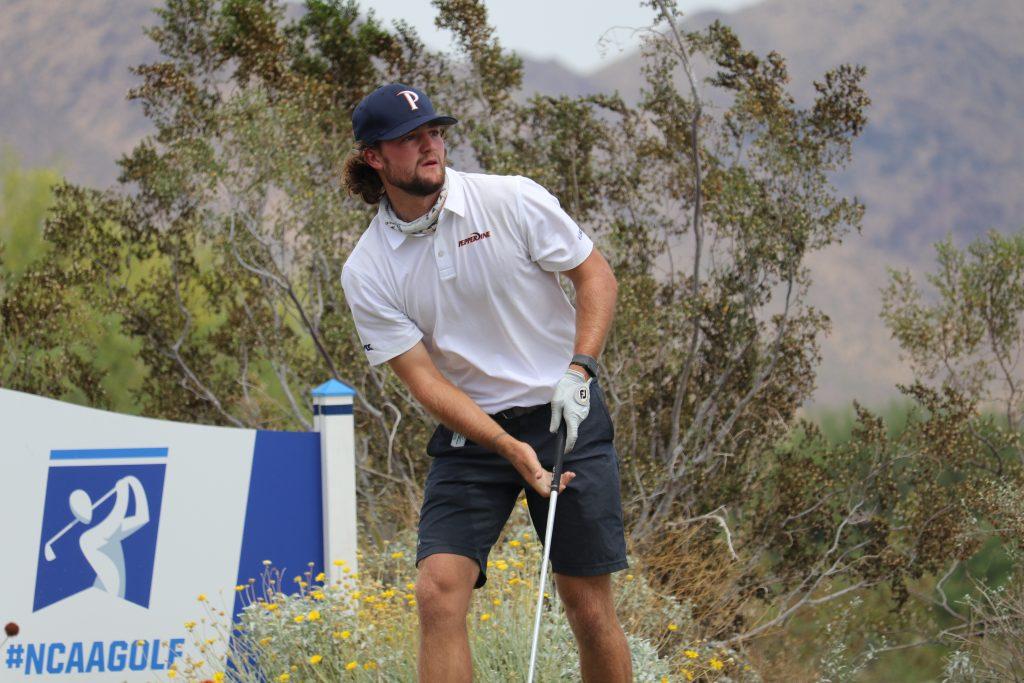 Then-senior Joey Vrzich plays in the NCAA Championship match in Scottsdale, Ariz., on June 2. Vrzich returned as a fifth-year senior.

Golf differs from the likes of basketball and baseball because it highlights the individual player and includes a team concept. At the collegiate level, tournaments normally consist of either 54 or 36 holes, with some players competing in 36 holes in a single day.

For major competitions, teams choose their top-five players to compete in a head-to-head matchup. The teams count the lowest four scores from the five and then add them to the team’s total score.

The team with the lowest overall score wins the tournament.

“If everyone does their part, the team does better because of it,” Beard said. “You focus on just yourself, knowing that it helps the team.”

The Waves followed that performance finishing fifth in the Colonial Collegiate Invitational Oct. 4-5. Senior Joe Highsmith finished ninth with scores of 72, 68, 70, and Vrzich tied for 11th with scores of 68, 73, 70.

With more eyes on the Waves now than ever, the team strives to maintain consistency and manage heavy expectations.

“You have to be on everyday, mostly mentally,” Beard said. “If you get too far ahead or think too much of the past, you get ahead of yourself.”

Going into the season as defending champions comes with pressures to meet expectations. With a team full of mostly veterans, they understand what’s at stake and how to handle the pressure. The team consists of one freshman, two juniors, two seniors and one redshirt senior.

“Experienced gained is helpful,” Highsmith said. “Maturity in golf is a big thing, and it can only be gained through experience.”

Though the Waves lost some of their firepower last season, Beard said he isn’t too worried, as he feels the team has enough experience to know what it takes. 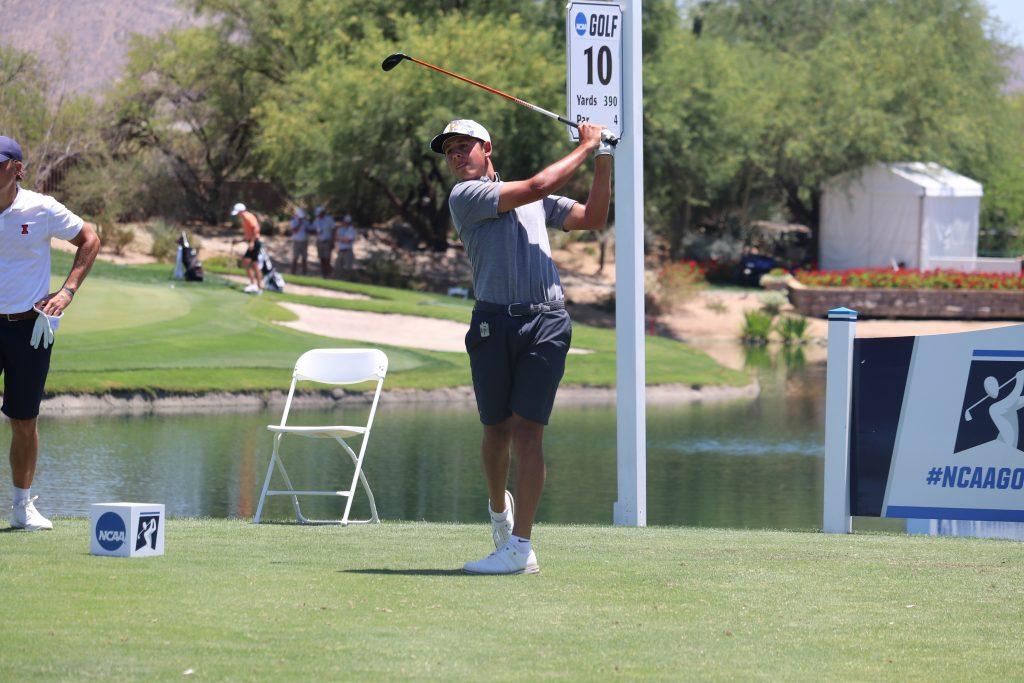 Then-sophomore Dylan Menante follows through his golf swing in the championship match in Scottsdale, Ariz., on June 2. Pepperdine defeated University of Oklahoma to claim the NCAA title.

The offseason wasn’t much of an offseason at all. Not only did it last a mere two and a half months, but Highsmith and junior William Mouw said they went off to play in other tournaments right after the championship match.

“It’s interesting because the offseason is jam-packed with other events,” Highsmith said. “Offseason is more in December and January.”

Highsmith competed in the U.S. Open the same month the team won the national championship. The U.S. Open took place June 17-20, at the Torrey Pines Golf Course in San Diego.

Additionally, Mouw spent his summer playing in events such as the Western Amateur and the U.S. Amateur.

“I worked on certain aspects of my game I felt needed improvement,” Mouw wrote in a text message.

For golfers, the Western Amateur is one of the most intense post-season tournaments in all amateur golf. The playing field is stacked with a total of 156 golfers, and after the first 36 holes, the field is trimmed to the top 44. The field continues to decrease to the top 16 players on the third day.

“Having good time management and a strong mental game helped me compete at the highest level,” Mouw wrote in a text message. “I love the game and the constant traveling — and as a result, the experience was relatively easy.”

Mouw wasn’t the only Wave represented in the tournament. Junior Dylan Menante, Vrzich, Highsmith, Hitchner and R.J. Manke — who later transferred to the University of Washington — all competed. Mouw finished the tournament with a score of 71 and 5-over-par 74.

As the team looks forward to the new season, the mental adjustment of the game changes. Before, Mouw said the Waves were merely the hunters, but now, they’re the ones being hunted.

“Coming from a small school, we are generally the hunters,” Mouw wrote. “This mentality has not changed, as the big schools still believe they rule. Our mentality is to put Pepperdine on the map.”

Pepperdine has gained the attention of the golf world. They came into the season as the No. 1 ranked team in the preseason poll for the third-consecutive season and are ranked No. 3 in the nation.

As for the rest of the season, Beard explained the Waves will play in a tough, but exciting schedule.

“We have one of the best schedules in recent years,” Beard said. “Now we’re going to get ready for a new tournament in Texas. Palm Beach, Fla., is always one of our favorites — the home tournament as well.”

For players like Highsmith, this season is more than attempting to defend the title. It’s about savoring the moment and getting the most out of each tournament.

“We get to play a really good schedule,” Highsmith said. “I’m really looking to play at every event the rest of my time here.”

Catch the defending champions at the Golf Club of Georgia Collegiate Invitational on Oct. 22.

YECA Members Take on the Climate Crisis, Advocate for More Action at Pepp 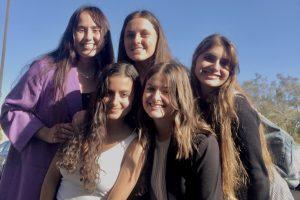 YECA Members Take on the Climate Crisis, Advocate for More Action at Pepp

The five YECA fellows unite after a meeting with President Jim Gash and administrators Sept. 15, where they spoke about changes...
Copyright 2013 Jupiter Premium Magazine Theme
Back to top