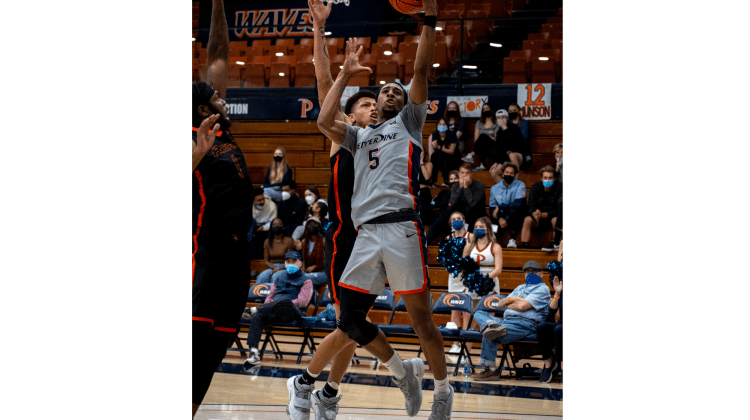 Redshirt senior Jade’ Smith goes up for a layup versus Pacific Feb. 5. Smith went down with an injury after a hard foul late in the second half but managed to make one of his free-throws.

The two teams played each other two nights prior and while the Tigers won that game, the Waves used what they learned Thursday to achieve a different result on Saturday.

“It feels really good,” freshman forward Maxwell Lewis said. “We should have won the first game, to be honest with you. I’m glad that we won as a team. We played together and just took control at the right time.”

To say that it’s been a tough season for the team is an understatement. With numerous games postponed, players in and out of the lineup due to injuries, and having one of the youngest teams in the West Coast Conference all made for an unusual season.

Freshman guard Houston Mallette appeared unfazed. Skipping up and down the layup line, Mallette continued to have a positive attitude, singing the lyrics to different warmup songs to himself. When it came down to the start of the game, Mallette and freshman guard Mike Mitchell Jr., were the last ones to join the team for the playing of the national anthem per usual.

The Waves started their offensive attack in the post. After a near turnover, freshman center Carson Basham threw the ball off the glass to himself for a layup, with the Waves jumping out to a 6-2 lead in the first half.

Lewis scored a layup and made his presence known early. Then, several possessions later, Lewis curled off two screens and converted on a mid-range step-back. Lewis forced a turnover and Mitchell Jr. made a long-distance shot in transition to extend the Waves lead to 13-8 with 12:19 to go in the first half.

Pacific tried to claw its way back into the game with two straight baskets, but sophomore forward Kendall Munson stole the ball and threw down a two-handed dunk.

“I thought we made less errors defensively and offensively,” Head Coach Lorenzo Romar said. “We have been making too many errors and shooting ourselves in the foot. Tonight, we cut down on those errors. If we can take that with us the rest of the short season, it’s just going to help our cause and I think our team grew up a little bit tonight because of it.”

The Waves gained momentum after Lewis hit back-to-back threes, expanding the Waves lead to 23-19 with 6:31 left in the first half.

“I think in the last four games, he’s close to averaging 20 points per game,” Romar said of Lewis’ recent play. “He is now become the guy who we can go to for baskets to where it just takes the pressure from other guys like Jan Zidek, Houston Mallette some of the guys that have been scoring. Just takes the pressure [off], another guy that can score a basket so it’s a tremendous help for us.”

At the half, the Waves out-rebounded the Tigers 16-13 and forced the Tigers to shoot 1-for-10 from 3-point range. Lewis led the scoring effort with 12 points and Basham had six points to go along with two rebounds.

“Carson gives us a low post presence,” Romar said. “Defensively, he’s 6’10”, he has long arms, he protects the rim, but he’s also been able to score baskets for us. He’s a legitimate threat down there to score and he has a high basketball IQ.”

The Waves opened the second half with five straight points from Mallette. Mitchell Jr., scored a floater as well to extend the Waves lead to 36-31 with 17:32 remaining in the second half.

After Pacific senior guard Alphonso Anderson missed a 3-pointer, the long rebound found its way to Mitchell Jr. He then pushed the pace and found an open Mallette who got fouled while shooting a 3-pointer. Mallette nailed all three of his free throws, making the lead 39-35.

With the Tigers on the Waves’ heels all game, back-to-back 3-pointers from Pacific junior guard Luke Avdalovic and Anderson gained Pacific’s first lead of the game at 41-39. The Waves answered with a 3-pointer of their own after senior guard Darryl Polk Jr. drove into the lane and kicked it out to Lewis.

After Polk Jr. stole a pass, he led the fast-break and passed it to Mallette, who initially missed the layup. But Munson never stopped running the floor and converted the put-back dunk with the score at 44-41 in the second half.

“That’s us growing as a team,” Basham said. “Before, we might’ve given up, might’ve not played as hard. Tonight, we played as hard as we could and got the dub.”

The Tigers went on a 13-10 run to tie the game at a 54 tie with 4:44 remaining in the second half. With the game on the line, Mallette would convert on a turnaround mid-range jumper. Then, Lewis would score on a post-up play, increasing the Waves lead to 62-58 with 1:12 left in the second half.

Free throws by Zidek, Munson, and Mallette would put the game out of reach. As a team, the Waves shot 17-22 from the free-throw line, besting their season average of 73.1%.

Lewis finished the game with 22 points while shooting 50% from both the mid-range and from the 3-point range. Mallette had 14 points and Zidek contributed with 12 points and seven rebounds.

“Personally, just playing a team defense,” Lewis said. “For me, just being consistent. Playing the same way every single day. So that’s my main focus for San Francisco.”