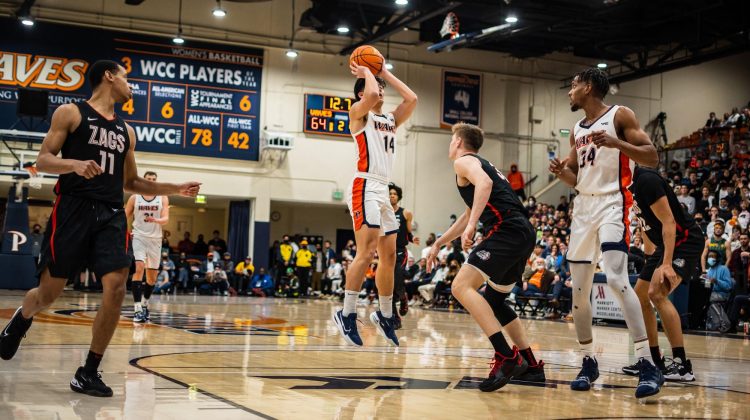 Senior guard Jay Yoon takes his chance at a jump shot versus Gonzaga on Feb. 16. The Waves lost to the Bulldogs 86-66. Photos by Lucian Himes

Going into Wednesday’s game, the Waves played the Bulldogs once prior this season. Pepperdine lost 117-83. This game marked the second to last home game for Pepperdine.

“We’ve gotten better,” Coach Lorenzo Romar said. “And this time, I think we became a better basketball team, and in the remaining couple of weeks, that’s what we’re going to keep trying to do. To strive to become a better team.”

The floor of Firestone Fieldhouse rumbled with anticipation as students and fans flooded into the arena. Murmurs about the No.1 ranked team created a buzz amid the student section as they argued about how the Waves would square up against their WCC opponent.

To start the first half, Pepperdine made surprising headway, keeping pace with Gonzaga. Freshman guard Houston Mallette and freshman center Carson Basham found shots from midrange to bring Pepperdine within two points of the lead at a score of 7-6.

“Our first key to win was stopping them in transition,” Mallette said. “Competing is the most important thing we can do. No matter what score, no matter how good they are, we just come out there and compete.”

After climbing back, the Waves and Bulldogs hit a rough patch. Multiple turnovers and missed layups later, Gonzaga senior guard Rasir Bolton broke the drought with a 3-point jumper, bringing the score to a 10-6 Gonzaga lead.

Gonzaga slowly began to pull away from Pepperdine, leading to a 20-11 score despite Pepperdine’s hustle on rebounds and loose balls. Pepperdine’s impressive effort continued with Pepperdine slowly following behind Gonzaga.

Thanks to a smooth jumper by senior guard D.J. Polk and Pepperdine’s great ball movement at the post, the Waves kept pace. Gonzaga remained in the lead at a score of 32-24.

Going into the latter portion of the first half, Pepperdine began to struggle, losing eight points on defense while being unable to produce any buckets on offense. Just as Pepperdine was hurting the most and Gonzaga led 45-24 going into the last minute, the Waves jumped back to life with a quick score and a three-point buzzer-beater play by junior forward Jan Zidek.

“It’s been great,” Romar said about having coached George Zidek and his son. “It’s been an honor to coach his son and honor his dad, George because he was an outstanding basketball player, outstanding person and hard worker, so to be able to come full circle and coach his son — I just think it’s great.”

To start the second half, Gonzaga’s sophomore guard Julian Strawther drew a shooting foul on Polk and went 1-2 on his free throws. Immediately after, Polk responded with a quick-release 3-pointer.

Gonzaga freshman forward Chet Holmgren was a force to be reckoned with on the court. Holmgren continued to add to his resume before the NBA Draft, as he finished with 18 points and 13 rebounds.

Senior center Victor Ohia Obioha subbed in during the beginning of the second half and immediately made his presence felt with a monster block on Gonzaga’s senior guard Andrew Nembhard to start the Waves’ attack.

Mallette paved the way to a 10-0 run capped off with an alley-oop dunk to Obioha. The Waves crawled back to a single-digit deficit trimming the Bulldogs’ lead to 57-49.

“Our students coming out here tonight made all the difference in the world,” Romar said. “So shout-out to our students for coming out to support us.”

The Waves’ student section roared at the comeback, but the Bulldogs managed to get their offense rolling. Gonzaga showed off their up tempo offense by going on a 13-2 run. The Bulldogs’ defense settled in, and the Waves were unable to find their offensive rhythm.

Gonzaga’s senior guard Andrew Nembhard drew a lot of defensive attention in the second half. Nembhard proved to be the focal point of that offense finishing with 14 assists.

The Bulldogs continued to grow their lead as the Waves struggled to gain momentum. Eventually, the pressure was too much for Pepperdine as they fell to a 21 point deficit which the Waves would hold onto for the rest of the half. The final score was 86-66.

When asked about the team’s goals going into their final games, Yoon said the team wants to compete at the highest level.

“We want to play the best Pepperdine basketball that we can play and come out every game ready and locked in,” Yoon said.

The Waves will take on Santa Clara in their final home game on Feb 24.