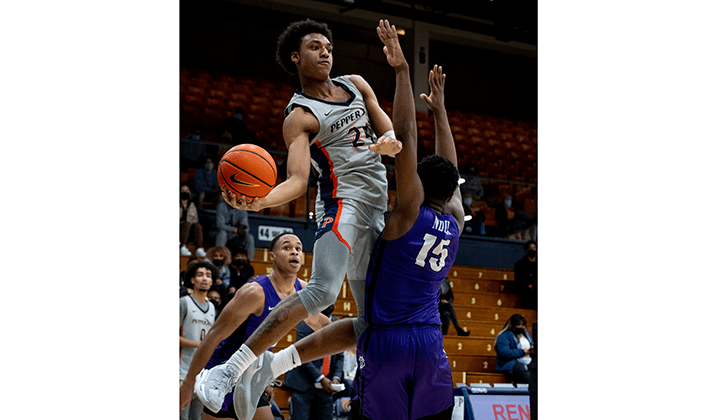 The Men’s Basketball Team hoped to turn the tide and score a win against the Portland Pilots but were unable to gain headway and lost 82-63.

In Pepperdine’s last game against St. Mary’s Jan. 13, the Waves lost 77-62. The Waves have a five-day stretch without games, the longest since the season restarted Jan. 8.

“We will get some rest,” Men’s Head Basketball Coach Lorenzo Romar said. “We haven’t had a day off in a while. We’ve just got to get back to the basics. Work on things that just make us a solid, fundamentally sound team and we got to start from there.”

Though the Waves won the tip-off, within the first two minutes of play, Portland scored two 3-pointers and a midrange shot, starting the game with a score of 8-0. Freshman guard Mike Mitchell Jr. scored a 3-pointer, getting the Waves on the scoreboard at 8-3.

Portland secured a rebound from the Waves and made a tight shot near the net, bringing the score to 10-3. In the rush down court, Portland’s Chika Nduka and senior guard Darryl Polk Jr. went down. Taking advantage of the confusion, freshman guard Houston Mallette scored a layup in a fast break, tightening the score to 10-5 with 15 minutes of play left in the first half.

“Throughout the game it was just hard to get my rhythm,” Polk said. “So it was hard for me. But I just feel like you know, just on the defensive end pretty blessed.”

Portland scored another mid-range shot and 3-pointer, despite senior center Victor Ohia Obioha fighting for rebounds at the net. The Waves wrestled for the ball, and on a throw-in with 10 seconds left on the shot clock, the Waves searched for a hole in Portland’s defense.

The clock clicked down, four, three, two, and on one Polk scored a 3-pointer. Portland’s lead tightened at 15-8.

Portland made another mid-range shot before freshman forward Maxwell Lewis made a 3-pointer facing the next straight on, bringing the score to 17-11 with 11:40 left on the clock. Portland logged a 3-pointer widening the gap to 20-11.

Redshirt senior guard Jade’ Smith took a hard fall as Kristian Sjolund scored a 3-pointer. Smith was awarded a one-and-one and made both shots, resulting in a score of 23-13. Portland made another three-pointer before the Waves scored two mid-range shots, bringing the score to 26-17.

Pepperdine made several shots, including two foul shots from junior forward Jan Zidek. However, the Waves missed several foul shots, while Portland went on to score 10 more points, creating a 14-point gap at 41-27.

With less than two minutes until halftime, Zidek scored a mid-range shot and Lewis shot a 3-pointer, bringing the score to 41-32. Portland was awarded two foul shots, and the first quarter ended with a score of 43-32.

“We just didn’t do a very good job defending in the first half,” Romar said.

Out of halftime, the Pilots scored a shot within the key, but Lewis snatched the rebound and rushed up the court, sinking a layup and bringing the score to 45-34. Portland shot and missed, Lewis secured the rebound again and scored again for the Waves, shrinking the gap back down to single digits.

The Pilots sank a shot within the key and from the foul line before Zidek made a 3-pointer five minutes into the quarter.

The Pilots made several shots before Lewis and Obioha made one foul shot each, resulting in a score of 52-41. The Waves were on fire as Mitchell sank a layup and scored a 3-pointer in quick succession, shrinking the gap down to six.

The Pilots scored a foul shot, but Lewis sank a 3-pointer, bringing the Waves within four points of the Pilots at 53-49 at 9:35

Portland scored eight more points before Zidek sunk a 3-pointer and with only seven minutes left of game time, the score was back in double digits at 61-51. The Pilots scored again and Zidek made a mid-range shot, keeping the gap at 10 points, before Portland racked up four more points.

The refs awarded Portland two foul shots and after a Portland player fell left of the net, however, it was unclear whether or not Polk touched him. Portland made both shots and the score grew to 72-56. Zidek scored within the key, but Portland claimed a three-pointer standing at 75-58.

The Pilots would log four more points compared with the Waves two. At 43 seconds Mallette made a 3-pointer bringing the score to 79-63. Portland would score three more points through foul shots, and the game came to a close at 82-63.

“I think our biggest thing is confidence,” Polk said. “You know, we lost a couple of games in a row, especially at home. Gives us a chance to get to play an away game in a different environment are just going in there with confidence that we can win the game. That’s all we need.”

Athletics announced that the Waves’ game against Pacific scheduled for Jan. 17 will now be Feb.17. Pepperdine will go on to play at Loyola Marymount in a PCH matchup Jan. 20.