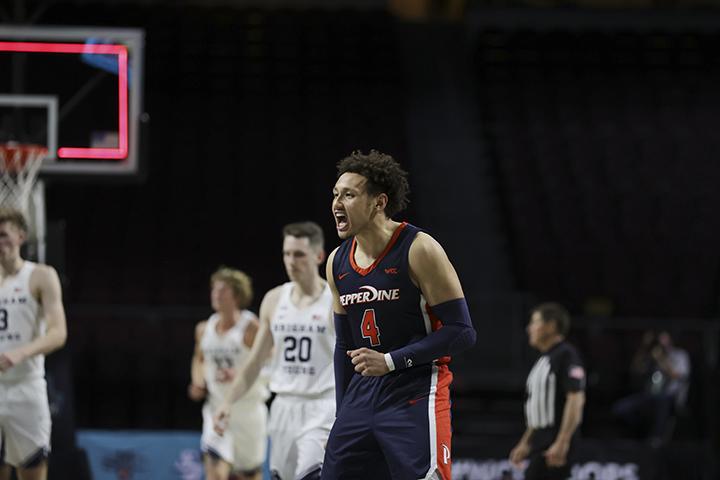 Senior guard Colbey Ross reacts after making a shot to send the game to overtime against BYU on Monday, March 8 in Las Vegas, Nev. Although he hit the biggest shot of the game, the Cougars held Ross to 7-for-24 shooting.

The Waves began their stay in Las Vegas for the WCC Tournament on a high note with a 78-70 victory in the quarterfinals against Santa Clara University on Saturday. Momentum carried over to the early portion of the BYU game, a clash of the second and third seeds in the WCC.

Despite a venerable performance from the Waves and a heroic buzzer-beater from senior guard Colbey Ross to send the game into overtime, Pepperdine came up short and went home without getting a chance to knock off top-ranked Gonzaga in the WCC Championship.

“Give them a lot of credit,” Head Coach Lorenzo Romar said. “They have great size, they’re physical. The ball just didn’t go in, we had good looks.”

The Waves got off to a solid start Saturday against Santa Clara in a first half that saw four ties and eight lead changes. Ross, who shot 4-for-9 in the first half and led all scorers with 13, consistently found his shot in isolation and the pick-and-roll. 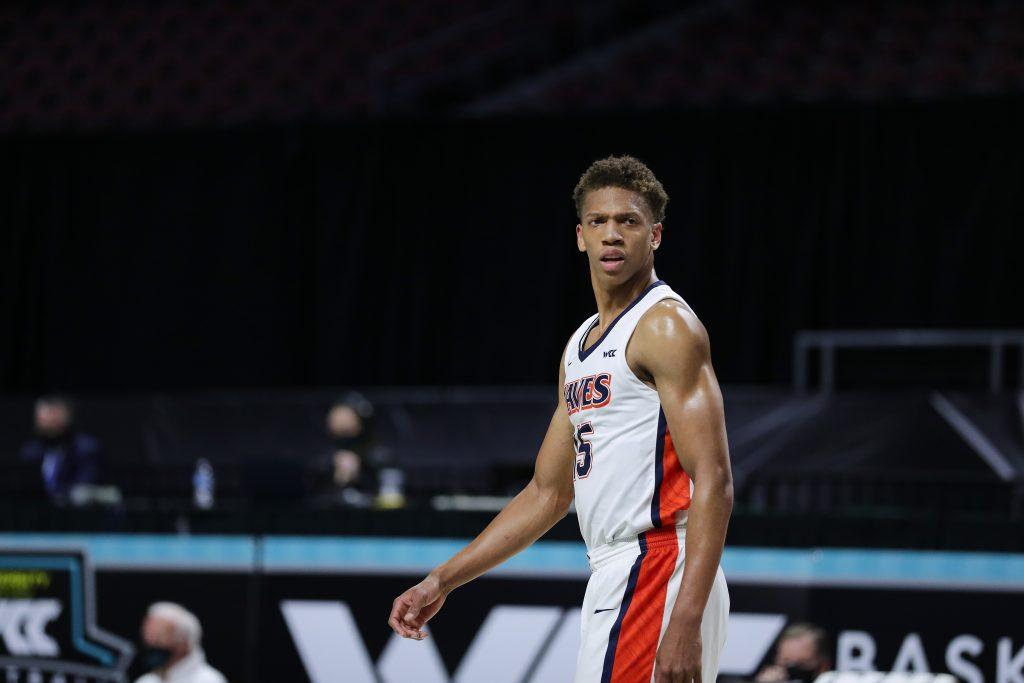 Pepperdine’s offense continued to be methodical to start the second half, scoring 30 points in the first 13 minutes compared to the Broncos’ 18. The score was 70-53 with fewer than seven minutes left in the game and it looked as if Pepperdine would run away with the victory.

Nonetheless, the Broncos stormed back with a 16-2 run in less than five minutes to make it 74-70 with 50 seconds left. Junior forward Guglielmo Caruso and senior forward Josep Vrankic helped orchestrate the scoring barrage. They finished with 16 and 15 points, respectively.

The Broncos were forced to play the foul game, and Ross hit his last four attempts to help seal a 79-70 victory.

“We’re very pleased with the outcome,” Romar said Saturday. “To come out here and open with a victory against Santa Clara is big, they’ve been playing good and very efficient basketball.”

Ross finished with 25 points and 12 assists, but perhaps the biggest feat was surpassing the late Hank Gathers for the all-time WCC Tournament scoring record.

Ross, who wasn’t aware that he broke the record until after the game, was elated.

“To be mentioned with a legend like that, it means a lot,” Ross said. “Playing for four years definitely helped, but it’s a crazy stat, and I’m blessed to be with a name like that.”

Less than 48 hours after the victory, Pepperdine had another dance with BYU. The Waves came into the semifinal 1-1 on the season against the Cougars, the most recent game being a 76-73 comeback win in Firestone Fieldhouse Jan. 27.

The teams were physical with one another from the start of the game resulting in a playoff feel fitting the month of March. The Pepperdine offense got off to one of their hottest starts of the season in their third game against the Cougars, shooting 9-for-12 with four threes to jump out a 23-11 lead with 11 minutes left in the half. Minutes later, their offense slowed and BYU battled back. Before long the score was tied 35-35 at the end of the first half.

While Ross was the standout through-and-through against the Broncos, he took a backseat to Edwards versus the Cougars. At the half, Edwards had 13 points on 5-for-7 shooting with 4 assists and 2 rebounds. Ross was limited to 6 points on 3-for-10 shooting with 4 turnovers and no assists.

A dunk from senior center Matt Haarms in BYU’s second offensive possession of the second half to gave BYU their first lead of the game. Pepperdine responded with back-to-back baskets to retake the lead, a lead they would hold onto until 18 seconds left in regulation.

Pepperdine’s offense was fluid in the second half. BYU had opportunities to tie or retake the lead early, but multiple Waves stepped up to convert pivotal baskets. Smith had 15 points, 10 coming in the second half. All of sophomore guard Sedrick Altman’s eight points came in the latter period as well. 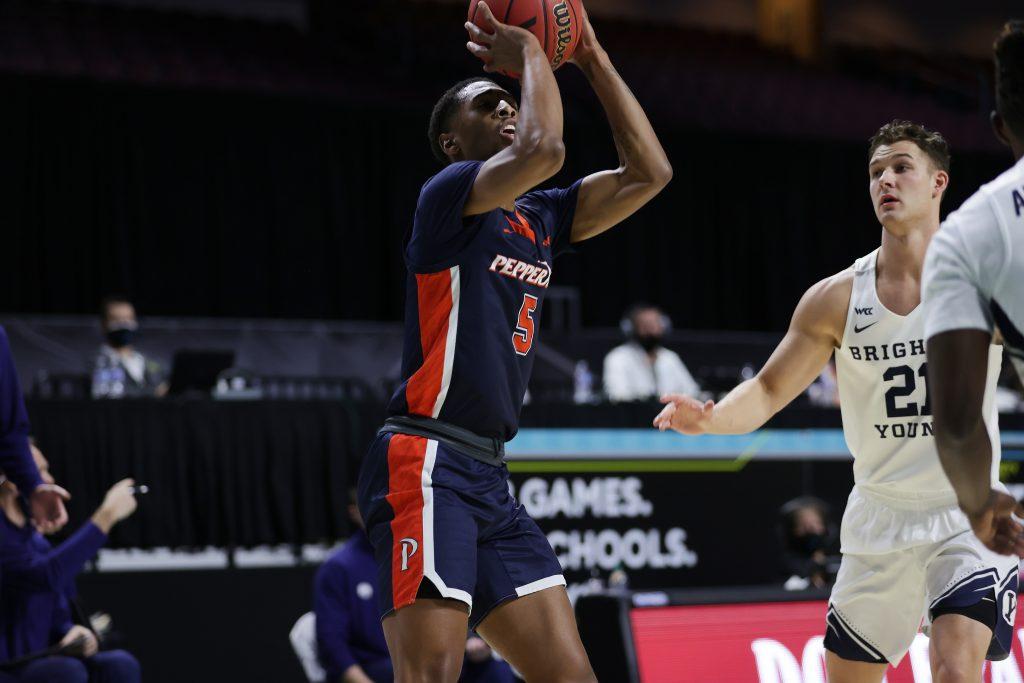 With 8:46 remaining, a basket from Altman gave Pepperdine a 10 point lead, 61-51. In eight minutes, BYU shrunk the Pepperdine lead down to one point, going on an 18-9 run to make it 70-69. Eight of BYU’s points came from Haarms; both in the paint and on the free-throw line.

With 18 seconds left, a give-and-go on the right wing gave BYU senior guard Alex Barcello the space for a baseline drive on which he converted a reverse layup to take the lead, 71-70.

“It’s not the first time Alex has done that,” BYU Head Coach Mark Pope said after the game. “He snuck a basket against Pacific in a huge game for us, one that we had to gut-out.”

After a timeout, Altman took the ball down the length of the court and attempted a layup, but Haarms blocked it. After a quick foul with six seconds left, BYU sophomore guard Spencer Johnson went 1-for-2 at the free-throw line, giving Pepperdine a chance to win with a three or head to overtime with a 2-point basket.

As the clock winded down it was all Ross, pushing downcourt and separating from his defender with a head fake to give him enough space for a long 2-point jumper that rattled home. After draining the buzzer-beating shot, Ross turned to the BYU bench and yelled, “Let’s go. Let’s keep going.”

The Pepperdine bench erupted as the Waves had earned five minutes in an overtime period for a chance to play in the WCC Championship.

Pepperdine fell apart in overtime, shooting 1-for-7 from the field. With two minutes left, Haarms converted two free throws to make it 76-74, BYU. In back-to-back possessions where Ross didn’t touch the ball, junior guard Darryl Polk Jr. missed two 3-pointers. Shortly after, the teams traded 2-for-2 trips at the line, Barcello for BYU and Edwards for Pepperdine to make it 78-76.

A turnover by Haarms with 30 seconds left gave Pepperdine the opportunity to tie or take the lead. An entry pass from Altman to Edwards was intercepted by Johnson, who tipped the ball towards the sideline before jumping to save it with a behind-the-back pass to junior guard Connor Harding.

The ball was immediately passed to Barcello, who was fouled with 16 seconds left. At the line, he gave his team a crucial four point lead.

“I saw that Spencer [Johnson] was worried about the right things,” Barcello said. “He had one thought in his mind and that was winning. That play won us the game.”

Foul calls plagued the second half and the extra period as both teams were in the double-bonus with 6:57 left in the game, meaning every defensive foul resulted in two free throws for the other team. There were 49 total personal fouls called in the game, a significant number of which were charges and other offensive fouls.

“This was my last chance on making the NCAA Tournament,” Ross said. “I wanted to do it for Coach Ro, my teammates and for Pepperdine. Tough night, the shots weren’t falling but you have to live with the result at the end of the day.”

BYU lost to Gonzaga 88-78 in the WCC Final. Gonzaga is the undisputed No. 1 seed in the country with a 26-0 record and will sit atop the West Region. NCAA Analyst Andy Katz projects BYU as No. 8 seed in the tournament. 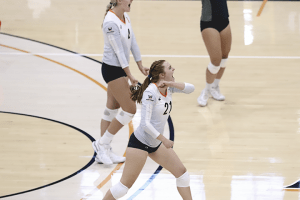