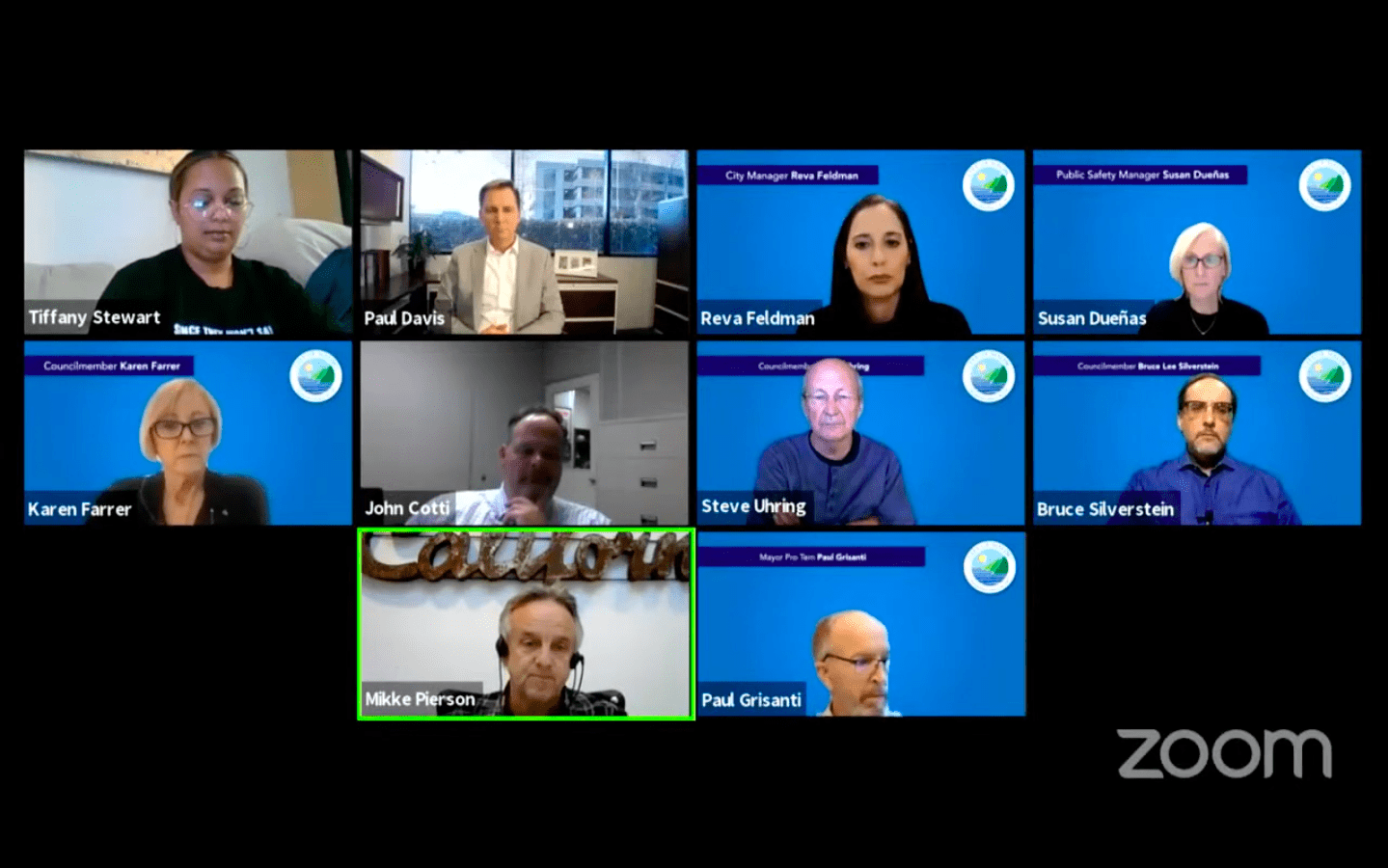 Malibu City Council gathers publicly on Zoom for their special virtual meeting Feb. 25. Members of the public also spoke during the meeting through the Zoom application. Photo courtesy of City of Malibu

In a continued effort to address homelessness in Malibu, the Malibu City Council hosted a special virtual meeting Feb. 25, to discuss the city’s next steps in homelessness and follow up on their meeting on homelessness Jan. 29, 2020.

The council hosted the meeting to discuss homelessness in Malibu, including its impacts, measures being taken, ongoing and potential challenges and potential new measures according to the city’s press release. Although the city council and members of the community engaged in the four-hour meeting with presentations and discourse, they made no resolute actions. Instead, the council passed five motions with plans to reconvene in another special meeting.

“I want to be a model city and I want to do it right,” Mayor of Malibu Mikke Pierson said. “I want to do something that — even though it’s difficult — we’re proud of what we’ve done right, and that would be my goal as a small city that does something while we wait for help that’ll come someday.”

Engaging with the Community

The first motion called for more public outreach, including the use of a questionnaire.

“We need a way to connect with the city, with the citizens on this issue,” Pierson said during the meeting. “I think we need to explore ways for getting that public input, getting out to everybody, and maybe we can have staff come back with ideas on that.”

Public Safety Manager Susan Dueñas said during an interview with the Graphic that public fear over safety and homelessness rose in past years, especially with recent encampment fires that occurred last fall.

“We’ve just reached a point where we need to brainstorm with the community other strategies that we can also fold into our efforts to help reduce the number of people on the streets but also really mitigate the safety impacts because it’s a real thing,” Dueñas said.

The second motion called for an exploration of joint efforts with other cities.

During an interview, Mayor Pro Tem Paul Grisanti said there are organizations in neighboring cities such as Santa Monica and Venice that have programs and services to support the homeless as well as sleeping locations. He brought up the possibility of partnering with these cities and their organizations.

“If we could work out some kind of partnership with them where we send them money and they’re able to rent a larger space and expand their program and support their increased staffings, that might be something that could work and be helpful to people,” Grisanti said.

Grisanti said if the city provided a shelter for people experiencing homelessness, there would be a lack of additional support services for them.

“One of the problems we have is if they come out here, and we take them in out here, we don’t have in place the different support things as employment and stuff like that,” Grisanti said. “There’s no density of work opportunities for them, for example, or mental health people who are working with them.”

The third motion called for Interim City Attorney John Cotti and Councilmember Bruce Silverstein to examine the legality and feasibility of a camping ordinance.

The proposal is an attempt to amend Malibu’s existing No Camping Ordinance to make it constitutional and usable, Silverstein said during an interview with the Graphic.

The fourth motion called councilmembers to find a location for the potential idea of an Alternative Sleeping Location.

The ASL is another possible method that aims to handle the Martin v. Boise case, a ninth circuit court of appeals case in 2018, which impacts homelessness policies, Silverstein said.

“The ninth circuit’s the only circuit that has decided this issue and what they held in this Martin v. Boise case was that it, in their opinion, it violates the eighth amendment of the U.S. Constitution which is the cruel and unusual punishment provision,” Silverstein said. “[The ninth circuit] held that it violates [the eighth amendment] provision of the US Constitution to criminally punish somebody, merely for being homeless.”

The law prohibits punishing people from sleeping in public because all humans need to sleep, but the court explicitly noted the ruling does not apply to people who have access to a place to sleep and eat, Silverstein said.

Dueñas said the ninth circuit case left cities like Malibu without many choices but to provide an ASL.

“If you don’t have an alternative sleeping location, if you don’t have somewhere else where they can sleep legally, you can’t punish them for sleeping,” Dueñas said. “It’s part of this whole effort to decriminalize homelessness.”

The ASL has been a controversial topic to its potential impacts on the community, Dueñas said.

“Everybody loves the idea [of ASLs], they just don’t want it in Malibu,” Dueñas said. “Everyone, on one hand, likes to say they’re very compassionate and they want to help people, but they have a really strong fear that if we do something in town, that one, it’ll attract more homeless people so we really won’t be solving our problem and two, it’ll probably impact their property values.”

Silverstein said the ASL’s location impacts its cost and effectiveness.

”Our property values are very expensive and therefore the cost of an ASL — when you think of the cost of the land it’s on — in Malibu is more than the cost of an ASL in Los Angeles,” Silverstein said. “So you can help more people by taking the same exact dollar, whatever dollars you have to help.”

Pierson said during the meeting the only location he could think of and suggest for a potential ASL was the City Hall parking lot.

The council’s final motion was to present findings to staff and reconvene in a subsequent meeting.

The council is moving forward with hopes of improving Malibu’s homelessness issue along with pressure from the state of California, Grisanti said.

Malibu, along with various Pepperdine organizations and initiatives, has taken steps to help those experiencing homelessness. The statistics have been slow to show the results or the problem is getting worse, Dueñas said.

Dueñas said although there have been 136 people who moved off the street and into permanent or supportive housing over the last couple of years, the number of people without housing and on the street has generally remained static over the past five years.

The city councilmembers would gladly hear public thoughts on this matter, which can be sent directly to their email addresses, Grisanti said.

“I really hope that at some point, brighter minds will get together and come up with real ways to actually have a positive impact on homelessness that aren’t occurring right now,” Pierson said. “I know a lot of money is being spent and a lot of people are working hard on it. We’re falling further behind; so nothing against those efforts, but they’re not working.”