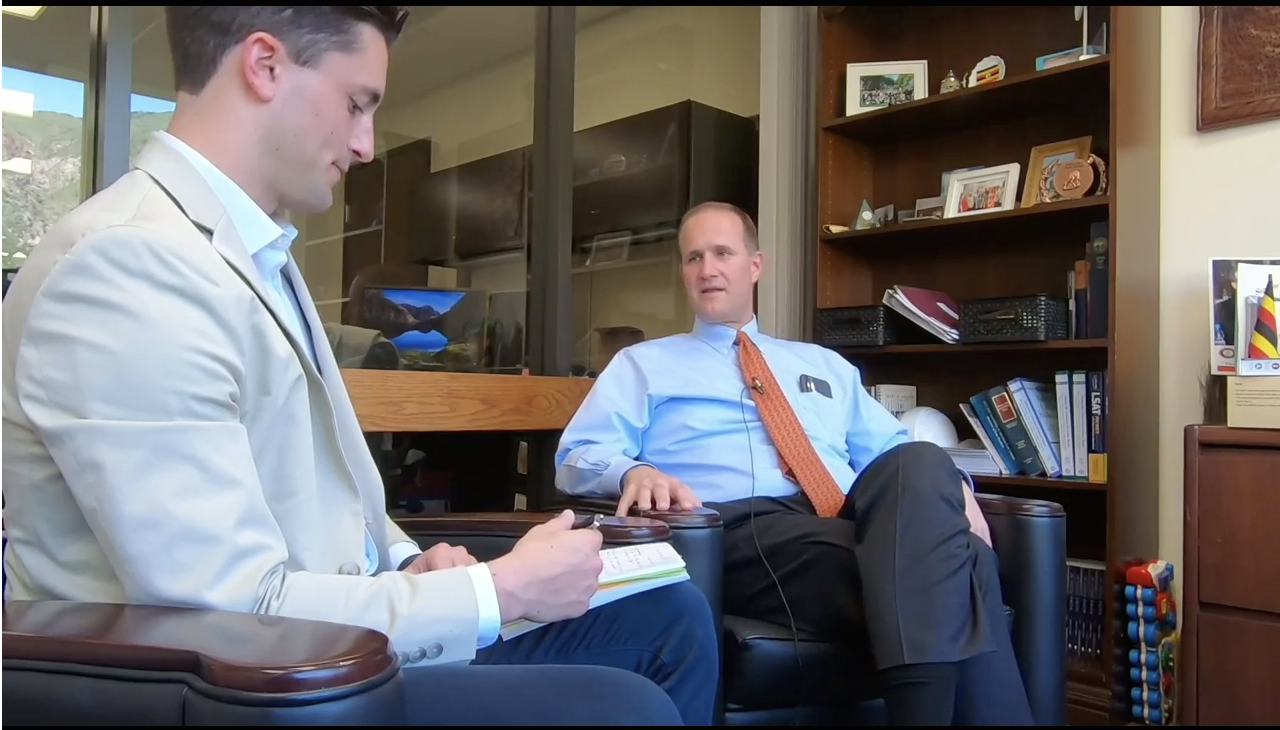 President-Elect Jim Gash anticipates his presidency merging the top three most important facets of his life: faith, family and Pepperdine. As the community looks ahead into the unknown following the completion of President Andrew K. Benton’s last academic year of leadership, Gash says these three core values provide insight into the direction that the university will head under his presidency.

Gash said faith is the No. 1 priority of his life and that this value developed starting from a young age. Gash went to church with his family ever since he could remember.

“It started off as something we did as a family,” Gash said. “Then, it became something that I owned and I have never had any major crises of faith. This is who I am and what I believe and it’s always been part of me.”

Since his childhood days in the pews of Sonoma Avenue Church of Christ in Santa Rosa, Gash’s focus on faith has led him across the world. In a massive leap of faith, the Gash family sold their house and moved to Uganda for six months in 2012.

The decision came after Gash’s first trip to Uganda in January 2010. Gash said he went at the prompting of Pepperdine law students and spent a week doing legal work at a juvenile prison. During his time there, Gash met a Ugandan boy named Henry who had been falsely accused of murder.

“His case, his character, his faith was so compelling that I was like, ‘OK, I can’t just do this as a one-and-done [trip],” Gash said.

After several more trips dedicated to this particular case, Gash said the community judges began to ask him for assistance in improving the shaky local justice system as a whole. Gash said he turned to prayer and felt urged to answer the call for help.

“I felt like God had placed this in front of me,” Gash said. “So I’m going to take the next step and each step led to another step, then another step. Then pretty soon it was, ‘Hey family, what do you think about moving to Africa for six months?’”

Gash said his family saw God remove all of the initially perceived barriers to the move, strengthening their faith and resulting in a transformational trip.

As his second core value, Gash said family plays a massive role in his day-to-day life and will have an impact on his presidency as well.

“Part of what we’ve agreed is that we are going to invest in Pepperdine as a family and ensure that it’s going to continue to be a family thing,” Gash said.

Gash’s wife of 28 years, Pepp Alumna Joline Gash, is a marine biology teacher at Oaks Christian High School. She said that she will be retiring from this role at the end of the academic year.

Jennifer said the family enjoys spending time together, playing a good board game, trying new foods and, of course, traveling together.

“We moved as a family a lot of times and when we were abroad, our only friends were each other,” Jennifer said. “We grew up very close. That was very important to our parents when they were raising us.”

Moving into this transition, every family member said they are “excited” for what is to come.

“I think this change will stretch and challenge my family in new ways, and really give them an opportunity to put their talents to maximum use,” Jessica wrote in an email. “I know my mom is very excited to get involved in the presidency, and that my dad is extremely thankful to have her by his side as his job gets crazier.”

Gash made it clear that his wife won’t be taking a backseat during his presidency.

“She’ll be by my side, and not as someone who is just there for support – [Joline] is a power player in this,” Gash said.

Joline said she has many aspirations for her time as first lady at Pepperdine.

A self-declared extrovert, she said she is most excited for meeting students, hearing people’s stories and hosting events at the Brock House. Her primary focus will be to promote well-being on campus.

“Health and wellness of our students is the most important thing to me,” Joline said. “I’ll probably spend the first year getting to know people, finding out what the needs are and seeing how I can be helpful in any way in the spiritual lives, mental health and physical health of our students.”

Another interest Joline said she looks forward to shedding light on is the perspective of the first-generation college student. She herself was the first person from her family to earn a college degree, which she said gives her a unique relationship with Pepperdine.

The youngest of seven children, Joline said she never could have attended Pepperdine as a junior transfer student like she did without the help of university scholarship and financial aid.

“For me, I feel like I could never repay what I got from Pepperdine,” Joline said. “So that’s another reason I’m really excited to get to serve in this role as first lady because if I could help anyone like I was helped, then it’s all worth it.”

Gash said before he ran for president, he sat down with each of his children and talked about what the prospect of the presidency could mean for their family.

“I told them, ‘You have veto power,’” Gash said. “’If you say no, then I won’t run’ … All three of them were very encouraging. They had some confidence in what they thought I could do and they expressed that.”

Joshua and Jennifer both said while being thrust into the limelight has been a little intimidating, their prevailing emotions are excitement and conviction that their father is the right man for the job.

“[My dad] is the most equipped person for the job and I’m so excited to see him thrive in that role,” Jennifer said. “He has so many visions and dreams, and I know he has been in prayer about this for a long time. As a family, we decided this was the best decision for him to apply.”

“I’m feeling incredibly excited for and proud of my dad as he starts this transition,” Jessica wrote. “He loves Pepperdine the way Leslie Knope loves Pawnee. I don’t think the University could have picked a candidate that loves Pepperdine more than my dad does.”

The kids said they foresee an opportunity to impact the university for the better in their roles as part of the presidential family. Both Joshua and Jessica mentioned a particular interest in their mother’s vision for improved student wellness.

“I’m really excited for my mom’s vision and push for mental health,” Joshua said. “I’m a Psychology major and my passion is health and wellness, specifically mental health. I’m hoping to get involved with her mission for the next couple years.”

Jennifer said her dad “absolutely” values the input of his children and is apt to ask their opinions on various matters before meetings or speeches.

“He wants to see how things will be perceived by students and that’s important to him,” Jennifer said.

Many people have begun to ask the Gash kids if they are excited to live at the Brock House, Jennifer said, however there are no plans for any of the children to move in any time soon. Joline said the historic house will be undergoing renovations for an undetermined length of time once the Bentons move out.

Joshua currently lives with Gash and Joline at their Malibu home in a neighborhood adjacent to Pepperdine but plans to spend his senior year living with friends in George Page.

Jennifer plans on attending Pepperdine’s Buenos Aires international program in the spring of her sophomore year and will be living in Seaside Hall in the fall.

“Besides my mom and Jesus and [my siblings], Pepperdine is the most important thing in [my dad’s] life and it always has been,” Jennifer said.

The university’s first alumnus president, Gash has seen the university through nearly every possible perspective: as a law student, as a law professor and as an administrator in his current role as the law school’s associate dean for Strategic Planning and External Relations. Furthermore, Gash comes from a legacy of familial Pepperdine ties. He said his grandfather once worked at Pepperdine and both his parents are alumni.

At a community welcome event hosted in Elkins for Gash a few weeks after the announcement of his upcoming presidency, the president-elect presented three “pillars” that he plans to adhere to: faith, fundraising and footprints.

Gash said the fundraising aspect will be “a very high priority.”

“In order to do more of the things that we want to do at Pepperdine, we need more resources coming in on a regular basis,” Gash said.

Some of the things that Gash mentions fall under that list of things the university wants to do (and has been talking about wanting to do for some time) is building a student recreation and event center.

“The university hasn’t yet decided to break ground and in order to build something you need to count the cost first,” Gash said. “My hope is to work closely and collaboratively with Andy [Benton] and the rest of the fundraising team and with the financial team to come to a decision as to what and when we are trying to accomplish. But my strong hope is that we will move forward with this.”

Another area of Pepperdine Gash said he has a vision for stems from his experience in Uganda. Gash plans to start a conversation with Dean Feltner and the new dean of international programs, Beth Laux, about abroad programs in developing countries, he said.

Gash said he is of the mindset that, while studying in a place like Europe or even Asia is a transformational experience, making the jump from a developed world to undeveloped can be even more life-changing.

Plus, he said, it could be an opportunity to further Pepperdine’s already premier international programs.

“There are virtually no schools that are doing study abroad programs in the developing world,” Gash said. “There is an opportunity for us to be, yet again, distinctive.”

Gash’s vision for Pepperdine faculty aligns with his third “footprint” pillar. He said he wants to value teachers that go beyond the simple transfer of information and invest in the experience of students.

“The deep dedication to excellence in teaching is non-negotiable,” Gash said. “We have to have people who are excellent and making the content accessible and exciting.”

Gash also detailed a hope to continue to promote faculty involvement in the outside world of academia through valuing research and providing more opportunities for students to partner in that as research assistants.

In the past 19 years of his presidency, Benton has navigated multiple controversies on campus from the recent local backlash against the university’s shelter-in-place policy to the beginnings of Pepperdine’s first LGTBQ+ club to protests against the campus Christopher Columbus statue.

Gash said he plans on maintaining a conversational attitude when faced with conflict during his presidency.

“My leadership process will be relational first,” Gash said. “When someone has challenges with something, let’s sit down and get to know each other.”

Once a conversation is had and trust built through mutual collaboration, Gash said his legal training taught him to evaluate issues from every angle of how Pepperdine will be affected.

“My job is to make decisions in the best interest of the school,” Gash said.